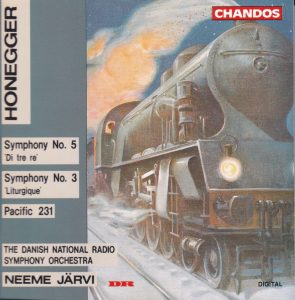 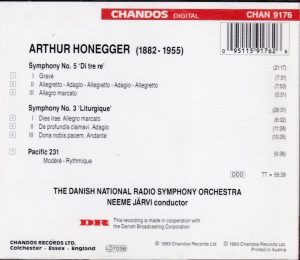 One of the best versions of “Liturgique” – and possibly THE best of Symphony No. 5
Originally posted on Amazon.com, 5 July 2013

I cringe when I read comments on Amazon or elsewhere that a recording offers “the best performance ever”, “unsurpassable interpretations” and blah blah. What do you mean, has the commentator heard all the other recordings, previous and subsequent? But usually (I’d even risk an “always”), it is clear that the reviewer as heard little others if any, that he hasn’t done any serious comparative listening, that he doesn’t even have the score. So the effusive comment really boils down to “I’m not really equipped to judge, but I’ve enjoyed this so much I can’t even imagine a better performance, and in fact I don’t even intend to investigate”. Good enough, but it would be more candid to phrase it that way.

Well, I HAVE listened comparatively and with the scores to just about every significant recording of Honegger’s Symphonie “Liturgique” (since the composer’s own recording from circa 1948, reissued by Music & Arts and Alpha) and 5th Symphony (they have been far less abundant since Charles Munch‘s pioneering recording in 1952, RCA GD60685), and even to some less significant ones, some not even reissued on CD (like 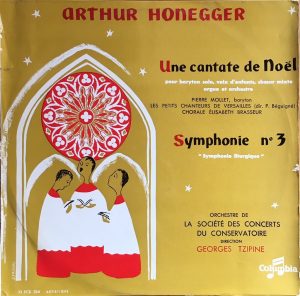 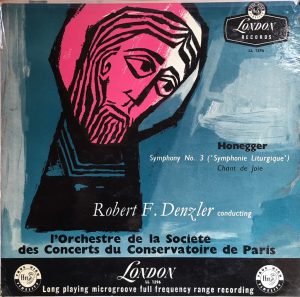 In “Liturgique” this doesn’t imply that he offers the ONLY best. Before Järvi, Mravinsky live in 1965 (various editions from Melodiya) and Karajan in 1969 (reissued on DG “20th Century Classics” or DG “The Originals”) had also offered two great performances, illustrating two radically different approaches and complementary views, Mravinsky breathlessly urgent and with crude and brutal brass (perfectly in situation in this composition meant as a cry of revolt against human stupidity), Karajan deliberate and forbiddingly massive. Serge Baudo (in 1960, the first leg of his complete traversal of the symphonies with the Czech Philharmonic for Supraphon)  was also excellent, and even a touch more furious than Mravinsky in the first movement, although his slow movement didn’t quite generate the same tension as the others. Järvi is decidedly in the Mravinsky camp, with outer movements of great urgency – the first, “Dies Irae”, within seconds of Mravinsky’s and fully conveying the breathlessness called for by Honegger (“Day of Wrath! Violent themes come in quick succession without giving the listener a moment of respite. Impossible to breathe or to think“…), the Finale only slightly less animated. The Danish National Radio Symphony Orchestra is formidably on top of it, the outer movements are played with all the required bite and anger, and to that Järvi’s recording adds the tremendous instrumental presence, vividness and potency especially from his brass (without the crudeness and brutality of Mravinsky’s Leningraders) that is missing in Charles Dutoit‘s 1982 recording, interpretively very similar (originally on Erato ECD  88045, also paired with Symphony No. 5). Indeed the unsung hero of Järvi’s success is his sound engineer, Jørn Jacobsen; especially felicitous is the deep-sounding tuba, and the vividness of the orchestral piano, which adds its trenchant crispness to the orchestral palette. The only miss is the drum (“caisse roulante”, the tenor drum) in the Finale between 5:17 and 5:45, which doesn’t resound with as much “Nielsenian” impact and tension as it could and should (but versions where it does seem to use the snare drum in lieu of the tenor drum). Nonetheless, Järvi’s Finale, though illustrating a radically different approach from Karajan’s (Karajan spot on the score’s very deliberate metronome mark of 88 quarter-notes per minutes, conveying an awesome sense of slow implacability, Järvi, at an urgent and nasty-sounding circa 107, closer to the 112 suggested by Honegger in a manuscript performance note mentioned by his biographer Harry Halbreich – Mravinsky took it at circa 116…), almost emulates Karajan’s in formidable brass potency, and his is the only concluding Adagio (at 6:47) that can compare to Karajan’s in ethereal sweetness. Karajan’s very deliberate tempo in the slow movement, far slower than the composer’s metronome indication and slower than the slower tempo adopted by the composer in his 1948 recording, was very unique and, together with his massive orchestral potency, worked to great effect; Järvi there is closer to the (metronome) mark and more flowing, less unique and remarkable than Karajan, but he lets the music of this (to my ears) problematical, overlong and diffuse movement naturally unfold and lends great dramatic impact to the climaxes. At the end of the day Järvi is not as extreme and idiosyncratic as either Karajan and Mravinsky, but for that very reason his version may be preferable to theirs if you have only one version in your collection. Note however that a little over a year after the Estonian Järvi, the Latvian Mariss Jansons made a recording of the Liturgique (EMI, paired with the 2nd Symphony and… Pacific 231), strikingly similar in sonic impact and interpretive approach except in the Finale, where it is even more extreme than Mravinsky’s: it too belongs to the great recordings of the composition. Between Järvi and Jansons, choice must depend on the pairing.

Jansons offers a good Symphony for Strings (No. 2) but not quite on a par with the best ones (Munch – both his mono version with Boston in 1953, paired with the 5th on RCA, see link above, and his stereo recording with Orchestre de Paris from December 1967 on EMI -, Karajan, Baudo. Michel Plasson is also outstanding, but he’s the only one I know who does without the ad libitum trumpet at the end of the Finale). Järvi offers the best 5th Symphony I’ve heard. The very natural and clear sonics are again one of the highlights of his performance, letting you hear vividly all the details of Honegger’s orchestration, with brass that snap and snarl, but without any artificial spotlighting as with Rozhdestvensky (Melodiya MCD 154, very idiosyncratic, but convincing, I find). Other fortes are Järvi’s sure sense of tempo in the outer movements and his very unique second movement (a combination of Scherzo and slow movement), taken more briskly than any other version, even Munch live with Orchestre National in 1964 on Disques Montaigne (reissued by Valois), and I find that his very urgency is perfectly suited to the character of the movement.

Music lovers love to draw hierarchies between orchestras, the big-leaguers, the top fives or tens, and the throng of all the average to mediocre ones (although they are rarely if ever specific in describing where exactly the average or mediocre orchestra is wanting). Well, as in “Liturgique“, I’m ready to offer my chest to the rifles and get my ears ridiculed by those who will claim keener perception (but facts, please!), and I will state that I hear no difference between the Danish National Radio Symphony Orchestra and a major one. Oh, yes, maybe: in the build-up to the climax of the first movement, from 3:18 onwards, because Järvi has his trumpet players play their fanfares very “tight” in rhythm (which lends them great intensity), their articulation is a little smudged. I have listened to about all the recordings of Honegger’s 5th – Munch in the studio with Boston (RCA, see link above) and live with Orchestra National (Disques Montaigne see link above), Markevitch (his 1957 studio recording, reissued on DG “The Originals”, not his live one from 1952 with the Berlin Radio Orchestra on Audite), Baudo (1963, see link above), Haitink live with the Concertgebouw, Plasson (1978, part of his complete symphonies on EMI), Dutoit (Erato, see link above), Rozhdestvensky (link above), Luisi on his complete traversal for Cascavelle (I still haven’t heard Ansermet’s live 1951 recording with the Vienna Philharmonic on Andante AND4080, barcode 699487408029, and Leon Botstein, available on download only) – and this one is the best.

Pacific 231 offers a welcome complement, for a TT of 57:55. Again Järvi’s Pacific benefits from its great sonics, lending great instrumental character and bringing out with great impact all the different strands of Honegger’s dense, loud and powerful orchestration. Honegger described the machine he had in mind (explaining that the piece did not seek to imitate its actual sounds but to describe in musical form the physical impressions it elicited) as a “heavy-weight, high-speed” locomotive, and when he himself recorded it in 1930 he put the stress on the speed more than the weight.

But Järvi follows here the tradition established in the early 1950s by Tzipine (on French EMI under label Columbia, not reissued to CD) and even more Scherchen (Westminster 1954) and conducts his engine with implacable power rather than true propulsion. Within that style, it is a great version, although it doesn’t erase the memory of the greatest of all, Bernstein‘s from 1962 (reissued on Sony’s Masterworks Heritage MHK 62352 or  Sony’s “Bernstein Century” SMK 60695 “20th-Century French Masterpieces”).

With Järvi tackling so much varied repertoire in his recording career, you sort of don’t expect him to be at home anywhere, except maybe in the Russian repertoire – and certainly not in the music of Honegger. Well – listen not to the reputation, but to the recordings: this is a great Honegger disc.