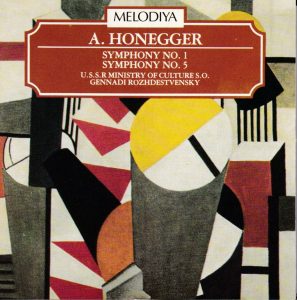 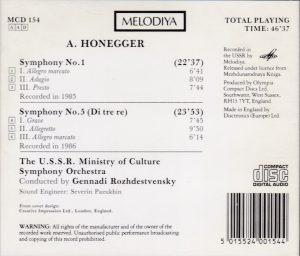 Interpretations like no one else’s
Originally posted on Amazon.com, 16 February 2013

Honegger’s 1st Symphony, commissioned by Koussevitzky for the 50th Anniversary of the Boston Symphony Orchestra in 1931, was and remains the most seldom recorded among his five. Honegger’s great champion, Charles Munch , had performed it in Paris in 1962 with Orchestre National, but never recorded it in the studio (the live performance was published in 1987 by Disques Montaigne and later reissued by Valois). The first commercial recordings were made in 1973-1974, by  Serge Baudo – with the 4th Symphony, the last and belated leg of his complete traversal with the Czech Philharmonic Orchestra on Supraphon, begun in 1960 – and by 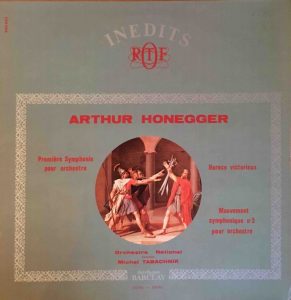 Michel Tabachnik and Orchestre National, on the obscure French label Inédits de l’ORTF (recording date unknown, published in 1974, not reissued to CD). There are no recordings, even live, by Honegger’s other early champions, Ernest Ansermet and Georges Tzipine.

Is there something in the composition itself that justifies that relative neglect? You bet! It belongs to Honegger’s most aggressive and biting works, with some of his early symphonic poems like Chant de Nigamon or Horace victorieux. That said, it isn’t more aggressive and biting than Bartok’s Miraculous Mandarin or of the most pounding parts of Stravinsky’s Le Sacre, and certainly less than Varèse’s Amériques. The second movement is one of those typical brooding movements of Honegger, a quasi-funeral march of intense pathos.

Rozhdestvensky offers both a very exceptionable and a very interesting version. On the one hand, he adopts a very slow tempo in the first movement, that deprives the music of part of its breathless fury. Compare the 6:40 it takes him to get through (and this is a one-tempo movement), to Dutoit‘s 5:37 (original CD release Erato ECD 88171), Munch‘s 5:43 (see link above), Plasson‘s 5:51 (EMI) and Baudo‘s 5:53 (link above). The music acquires a more playful character, less furious and aggressive. But then, Rozhdestvensky makes up for the sluggishness of his pacing thanks to the remarkable bite of all his players and especially brass and woodwinds, abetted by the extraordinary sonics, extremely close-up and vivid, letting you hear all the details of Honegger’s rich orchestration and exposing with almost glaring crudeness the great tonal character of every section of the orchestra. With Rozhdestvensky you are not so much, as with Dutoit, sitting with the audience, as right in the middle of the orchestra (and closer to the back, brass and woodwinds, than to the strings). This is by far the version with the most potent instrumental impact, and the music easily makes up in huge power what it may lose in sheer drive. With that very sonic vividness the result in the slow movement is less pathetic than with Dutoit but more dramatic. Rozhdestvensky’s Finale is also moderately paced but not as extremely so as the first movement and the music can take the approach better, lending it a rustic bonhomie that is very congenial to Honegger, and again with the extraordinary instrumental pungency afforded by the sonics (never has the beginning sounded more like Dukas’ Sorcerer’s Apprentice), the reading here is simply a great one, with no reserve.

It was a good idea to pair, with the First Symphony, Honegger’s last offering in the genre, also written for the Boston Symphony on commission from the Koussevitzky foundation and premiered by Munch in 1951, and I am surprised that nobody else has done so: when on a single LP or CD most other offerings of the 5th come with the far more popular 3rd Symphony, “liturgique“, see Baudo (an individual CD release on Supraphon’s budget collection Crystal, that you will find with my review of the complete set, see link above), Dutoit (original CD release Erato ECD 88045) and Järvi (Chandos CHAN 9176); Plasson comes with 4 on EMI 7 64275 2 (see link above), and Munch (with the Boston Symphony Orchestra in 1952) with 2 on  RCA GD60685 (Europe) / 09026-60685-2 (US). The 5th also recaptures something of the grimness and aggressiveness of the First, especially in its Finale: and isn’t it fitting that the 5th should end exactly where the First began: with an “Allegro marcato”?

There is nothing outlandish in Rozhdestvenski’s pacing of the first movement, it is on the expansive side but not out of line with some of his predecessors, like Munch (Boston 1952) or Baudo (with the Czech Philharmonic in 1963). More striking during the introductory quasi-chorale is the very long decay time, the echo of the strings still resonating during luftpauses when the next note his played. Again the extraordinary vividness of the solo instruments, as artificial a perspective as it is, brings a lot to the music and highlights Honegger’s very chamber-like orchestration which plays a lot with combinations and opposition of timbres. Likewise in the second movement (a combination of a Scherzo and a slow movement) and the Finale: there Rozhdestvenski’s pacing is frankly on the slow side (compare the second movement’s 9:48 to Munch‘s 9:15, Dutoit‘s 9:00 and Baudo‘s 8:00 – the differences aren’t as dramatic as that in the Finale) but, as in the First Symphony, this is offset by the extraordinary instrumental pungency and crispness, and in the Finale I was even reminded of some of Mahler’s Scherzi, a composer whom you’d think is as far apart from Honegger as can be. But through Rozhdestvenski’s approach and sonics they suddenly shared the same taste for instrumental colors, bite and pungency.

Because of its strong and out-of-the beaten-track interpretive choices and its very peculiar sonics (and its stingy total time of 47 minutes), this is not THE version to have of these two symphonies if you have only one – for that, go to Baudo‘s complete traversal, which can serve as a good foundation for a Honegger collection (but, depending on the edition, there are sonic problems with the transfer of the First Symphony, or all BUT the First Symphony, see my review for the details on that). On CD and limiting myself to modern studio recording, Plasson‘s is also an excellent Symphony No. 1, and Dutoit‘s is good too, if lacking an element of bite and rawness that are essential in this music. For Symphony No. 5, Järvi is the version to start with.

But, for the very same reasons (and the obviousness of its pairing), it is one to have absolutely in your collection if you are a serious Honegger devotee. It is certainly an interpretion like no one else’s.