I spend a lot of time – here or even without venting it publicly – complaining about the unhelpful, customer-adverse rather than “-centric”, bureaucratic mess that Amazon has become. But eBay tends to be no better.

I buy a lot of CDs on eBay, when prices are more attractive than on Amazon – which happens especially when I buy in bulk from a given seller, because I can get rebates on combined shipments, an advantage that Amazon doesn’t offer. Payment through paypal is also very easy, two clicks and it’s done. And there are other attractions to eBay. But eBay is like Amazon: such an obdurate, bureaucratic mess in some aspects that it is absolutely infuriating. As satisfied as I am with getting my CDs cheap, I woudln’t put my life on the line to save eBay if it was threatened.

Another problem that appeared one day – past exchanges of mail show that it had already started in October 2016 – was with the Summary page. That’s the page – or rather, the pages – that recap the objects you are following (“watch list”), or those you have purchased. That or these pages all of a sudden were taking hours – well, maybe a minute, which in the time of the internet seems like hours – to load. Scrolling down a page was so slow you thought it was mired in wax or something. Or whenever I made a change to one of the pages, like suppressing an object that I had been watching: hours to load again (and some spooky jumping from page to page in the process). Paying my bulk purchases became a nightmare, because when I needed to suppress from the list of purchases to pay those that seller had not yet invoiced (it happens with some sellers I do regular custom with): hours to re-load with each suppressed item, so imagine if I had to take ten off the list. Infuriating.

From the little I could make up of it, it had to do with some script or scripts – for ads, maybe, I’m not sure – that were endlessly running while the page was loading and slowed down everything. So, of course, I contacted eBay. And, of course, the response was: “it’s not us, it’s you. Empty your caches, delete your cookies, use another browser, check the settings of your antivirus. It’s not us, it’s you”.

Yeah, sure: so why was it doing it ONLY with eBay, and with no other website, not Amazon, not Wikipedia, whichever browser I used, even the already obsolete Internet Explorer 11? They didn’t care, “yeah it can happen, it’s not us, it’s you”.

Sometimes, you feel that those people are hired and trained and paid not to solve problems, but to deflect requests and throw the hot potato out the office window. Of course, that attitude, “it’s not us it’s you”, isn’t very conducive to examining if it may not be “us” after all, and fixing whatever problems.

I gave up and was left to mumble and grumble against the inconvenience of eBay and the incompetence of its staffers.

BUT! Wait. This is not a post just to vent and complain. This is one to say that one should never lose hope and optimism. THINGS HAVE SUDDENLY GOTTEN BETTER WITH EBAY ON THAT FRONT.

First, a few months or weeks ago, I noticed that the loading and scrolling of the Summary pages got fine! What a relief. Now, the price to pay was that I couldn’t delete items from those pages anymore, the link to delete didn’t work. But okay, I could live with that better than with the sticky loading and scrolling. But, more good news: now, just recently, the delete function was effective again.

Now, I will NOT say “thank you eBay”. I’ll say: “so, after all, it WAS you, and not me, not my caches, no my cookies, not my browser, not my antivirus? WHY DID IT TAKE YOU SO LONG TO FIND OUT AND FIX IT???? And have you learned the lesson? I bet you haven’t”.

Not the kind of stuff I usually buy and review, but… I chanced on this one as I was working on a discography of the French label Chant du Monde, and I thought it would make a nice gift for a friend of mine who just had a baby. I wasn’t even going to consider reviewing it… and then one thing led to the other, and even the apparently simplest, most unconspicuous things can lend themselves to very elaborate reviews, once you start digging… So, that story is told under my review of Berceuses du Monde Entier (Lullabies from Around the World) sung by Colette Magny,  Talila, Marina Vlady, Brenda Wootton, Naomi Moody and Toto Bissainthe. Chant du Monde LDX 200312 (1990), CML 500312 (1995), 500312 (2004).

I chanced upon this set as I was compiling my big CD-discography of Christian Ferras.  The same label has also issued a set devoted to him, 600379 barcode 4053796003799,  which I’ve left out of the discography, because obviously it offers what I believe are bootleg dubs of material that was reissued by the official labels, EMI and DG, in transfers that I trust will be infinitely better, so why bother? The label, “The Intense Media”, appeared to be an offshoot from the infamous German label Membran, that I had first encountered some years ago when it issued large sets devoted to the great conductors of the past, adorned with inept titles for the supermarket, like “Maestro Classico” (for Furtwängler!), “Maestro decente” (Böhm), “Maestro Brillante” (Ormandy…) and the likes, and, more fundamentally, that obviously plundered all the other labels they could find, official like Sony or RCA, or non-official like Dante, Biddulph etc.  And now Dante and Biddulph are dead, and Membran thrives? That’s rewarding the bad guys. Nonetheless, the CD reissues of Michèle Auclair are few and hard to come by in the West (she appears to enjoy a much greater standing in Japan and Korea), and although I had some of the Japanese “official” reissues, the set was cheap and I thought I’d give it a try.

Well, turns out that all my “expectations” were fulfilled: the Auclair set is obviously plundered as well from previous reissues by other labels; I could check that for sure with the Brahms and Mozart Concertos, by comparing with my Japanese editions, and I have no reason to believe that the set proceeds otherwise with the rest of its material (it may be cause for some to rejoice, then, that the sonics won’t be any worse than the original reissues they were  copied from). Also, you may think you are making a good deal for 8 CDs, but each CD is very short, the worst being the Debussy-Ravel Sonatas, running 28 minutes.

But to make my review useful, I’ve added a discography of all those other, mostly Japanese, CD reissues of Auclair’s recordings.

Recently acquired (and that I hope to fully review someday): 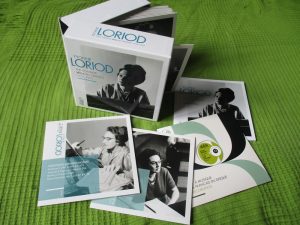 Years ago, I had, if I remember well, a very scratching, 10″ LP with two Mozart Concertos played by Loriod and conducted by Boulez, that I had inherited, I think, from my dad or my uncle. Yes! Boulez conducting and Loriod – Madame Messiaen – playing Mozart. Not exactly what you might have expected from those two specialists of 20th century, avant-garde music. But the record was so unbearably scratchy that I happily parted with it, offering it to a dear friend of mine and record collector.

Well, those Mozart concertos are back, first time on CD – there were actually four of them recorded by Loriod and Boulez for Vega, Nos. 1-4. No scratches, excellent transfers. In fact, the set is lavishly done, with an excellent booklet that is in itself a fine compendium of Messiaen documentation, 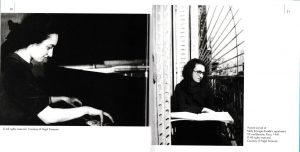 sporting reproductions of the original Vega LPs, rare early photos of the Messiaens and associated performers, and posters of various concerts of Loriod and Messiaen, an introduction by esteeemed French critic, Messiaen specialist, founder of the Olivier Messiaen piano competition and erstwhile artistic director of Vega records in the early 1960s, Claude Samuel, and moving tributes by Loriod’s pupil and Messiaen specialist Roger Muraro, and by musicologist and Messian biographer Nigel Simeone. No slapdash job, a work of care. 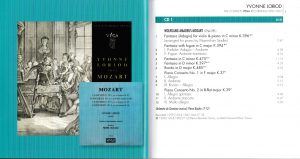 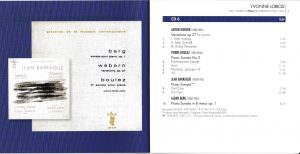 The set is wrong in some of its indications of “First CD release”. As I mentioned, excerpts from the four books of Iberia were published on 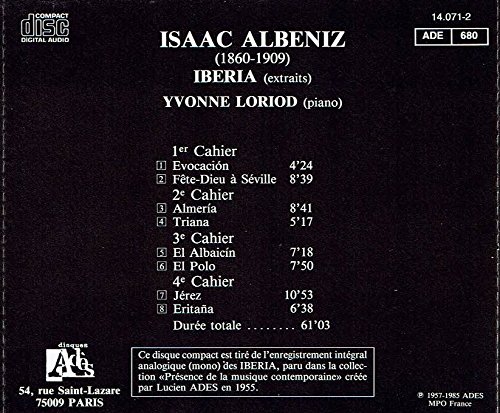 Adès 14.071-2 (1985) barcode 3129671407127. The four Mozart Fantasias, Sonata K331, Rondo K485 were on Adès’ budget collection “Or”, 13.204-2 (1987), barcode 3129671320426 (best documentation for the latter is on Muziekweb.nl). But all these early Adès CD reissues are now offered on the marketplace (if they are at all) at cut-throat prices, it’s good to have them back in a single set. Nigel Simeone, in his otherwise very detailed and informative essay on Loriod’s performance and recording career, is, I believe, also wrong when he states that that Loriod and Messiaen’s first recording of Visions de l’Amen, in 1949, was made for the American label Dial. I believe it was for the French Contrepoint, 6 78rmp sides CO 1 to 6. My understanding is that Dial 8 was a reissue to LP.

As a great bonus, the set adds two recordings made for Boîte à Musique (Messiaen’s 8 Preludes, 1958, first CD reissue) and Club Français du Disque (Stravinsky’s Petrouchka by Orchestre des Cento Soli under Rudolf Albert, a recording from 1957 in which Loriod was the pianist). The latter was previously reissued to CD on Accord 476 8957, barcode 028947689577 (paired with Le Sacre by same conductor and orchestra).

One small frustration, maybe: Decca left out the recordings made for Vega’s successor Adès, of Yvonne Loriod’s sister, Jeanne, a famous player of Ondes Martenot, who participated with Yvonne in (most of) the recordings of Messiaen’s works with piano and Ondes. Vega’s Turangalîla-Symphony conducted by Maurice Le Roux is there of course, but in the early 1980s Adès published two LPs of Jeanne’s Sextet (originally on 21.007, see entry on Discogs.com), and two pieces there included were for Ondes and Piano, with Yvonne at the piano, of course: André Jolivet’s 3 Poèmes pour ondes Martenot et Piano and Darius Milhaud’s Suite pour ondes musicales Martenot et Piano. 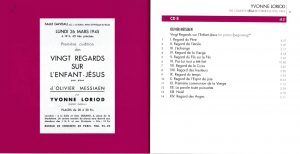