So, I have many automated searches on eBay, arcane stuff I’m looking for, labels I’m interested in, and as a consequence I receive easily two dozens of daily notifications: the net has to remain large and its mesh tight, if you’re not going to miss anything – which means you’re going to pull out a lot of junk too that you need to sort out and dismiss. By guesstimate there is probably 1% find for 99% ditch – if not 0.1 to 99.99. Either the yields are totally irrelevant (I have a search on “full score” because full orchestral scores are very expensive when new and I’m always hoping to find bargains on eBay, and I get tons of offers for what I think are baseball scorecards or something…), or I have the CD already, or the price is way over what I’m willing to pay…

And, because it is tedious and repetitive, I do the sifting very quickly, so misses happen.

The other day, I was going back to the very backlog of my mailbox, to wastebin away the old notifications of now-expired bids. But, because I am somewhat obsessive and there’s always a scrap of info to glean for my ongoing discographies, I did take a look before ditching.

In the notification from August 16 for Tahra Records (I maintain a discography of the label, although I’m not currently actively in the process of adding more of their issues to my already satisfyingly sizeable collection of Tahra CDs), I saw an offer for a Longbox-set devoted to French pianist Marcelle Meyer, which had failed to catch my attention back then. 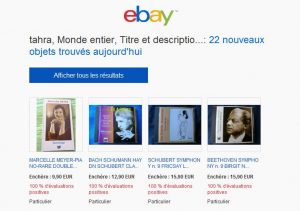 It is the 2 CD-set TAH 579-580, and it suddenly struck me that I wasn’t sure I had that one listed in my Tahra discography. Tahra, founded in 1992 by Myriam Scherchen, the daughter of conductor and maverick Hermann Scherchen, and her husband René Trémine, ceased its operations in 2014. They were specialized in releases of careful reissues and live broadcasts of great artists of the past, with a special bent on those of Austro-German descent – to limit myself to conductors, and other than, obviously, Scherchen: Furtwängler, Knappertsbusch, Abendroth, Jochum, Klemperer, Keilberth, Van Kempen, Schmidt-Isserstedt, Böhm, Schuricht, Weingartner, Rosbaud, Bruno Walter, Fritz Busch, Clemens Krauss, Erich Kleiber, and I’m surprised they didn’t include Beckenbauer! Not a whole lot of Karajan either…

In their 22 years they released in the vicinity of 900 CDs (with reissues and gaps in the label numbering, I haven’t tried to make an exact count), and while my discography is nearly complete, indeed I still have a few gaps: not because the missing ones are difficult to find, mind you, on the contrary: you just need to unfold the barcodes. So because that was easy to do, I left the chore aside.

Indeed I was missing the Marcelle Meyer set and a few adjacent ones, so I took the opportunity to fill the few gaps I had there. However, looking more carefully at the August offer listing (which fortunately had not yet been suppressed by eBay, and commendably included many photos of the set), I saw that the Marcelle Meyer longbox came with what appeared to be a lavish booklet, and the back-cover photo indicated that it was a “limited De Luxe editon” including a complete discography of Marcelle Meyer and a “rare and unpublished iconography”. 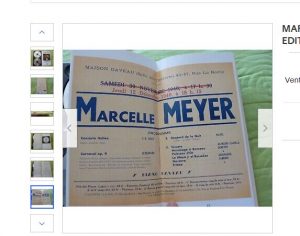 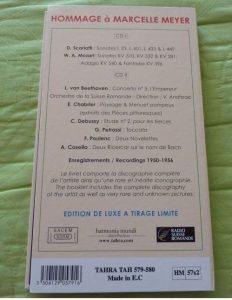 Oh. Wow. What started as a discographer’s faint interest suddenly turned into collector’s lust! But wait: current best price on Amazon.fr: 222 euros! on Amazon.co.uk? 208 pounds! Amazon.com? 89.99 $ – better, but still… Collector’s lust maybe, but I’m very stingy too, and am not ready to pay that price even for a lavish booklet and discography…

It’s when I returned again to the original August eBay listing that I found cause to rue not having noticed it in due time: look at start price!

But wait! That’s when I noticed that no one else had bid either (what ARE people doing in the middle of August that’s more important to them than closely monitoring their eBay offers, I wonder?). You mean, this 90 USD or 200 euro gem was offered at a tenth of it’s normal price and at a truly steal-price, and it was left bare??

Well, better late than never. I took my chance, contacted the seller through eBay and asked if he still had the set and if so, if he’d put it back on sale. He promptly answered back that he did, and would – and not on bid, mind you, but on immediate purchase at fixed price. A little fright then happened, because when I searched for the set on eBay, I found an offer… at 90+ euros!

Hey, wait a sec’, pal! That I am (more than) willing to buy at 9.90 doesn’t mean I’m willing to buy at 90! But no, false alarm: it turns out that it was someone else’s offer. New search, and there she was, Marcelle Meyer and her lavish garments, offered to me alone and waiting for me to take her, for 9.90 euros + 6.80 shipment,  and I’ll stop right here this lewd metaphor that will make me anathema to Meetoo until the end of time.

I’ve received it today. Yes the booklet is lavish, and precious not only for its discography but also for its invaluable photos. It alone certainly makes this set worth, even in my own stingy appraisal, 50 euros or dollars, and frankly the 90+ demanded by some, given that the set was a limited edition and that Tahra is now gone, is in fact far from outlandish. 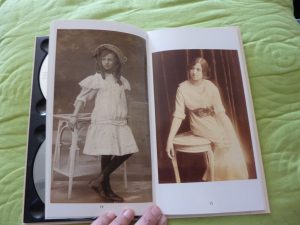 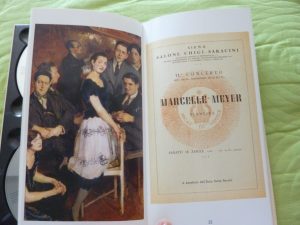 I can’t believe my luck. Now I know why I spend all these hours on eBay.