Not that I think this has any interest to anyone but a mad discographer like myself, but just to keep record for myself and as a follow up on my blog post from May 24, I’ve just found another of these (rare) cases where a label gives the same barcode to two different CDs. In this case, it is Chant du Monde (and the true culprit would be Harmonia Mundi, who distributed the label and thus attributed the barcodes), with two issues bearing the same barcode 3149025056559: 288 015/17, 3 CDs with Vassili Sinaiski leading the Moscow Philharmonic in the Complete Tone Poems of Sibelius, and 288 051, Russian Pianno Trios vol. 2 with Rimsky-Korsakov’s Piano trio in C minor and Borodin’s Unfinished Piano Trio by The Moscow Trio, two releases from 1992. I haven’t found any entirely suitable backcover photo online of 288 015/17 (Sibelius), all are unfocused on the vital information: the barcode, but from what I can make out of it, it is indeed the same (and backcover photo is not my only clue; some eBay sellers unmistakably selling the Sibelius set give its barcode as 3149025056559): 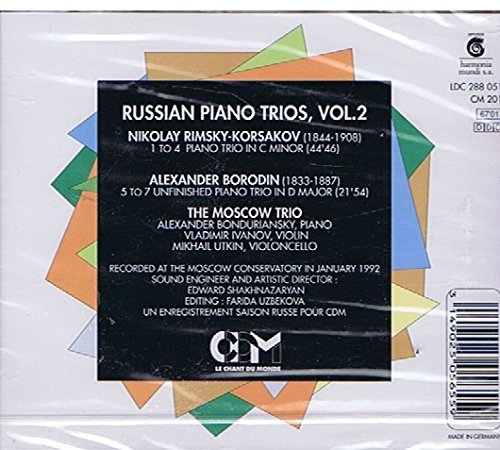 So again, if you buy on Amazon, you don’t know what you’ll be paying for: 3 for the price of one, or one for the price of 3? Melomania and Rakuten list the barcode only as Russian Piano Trios.

Saturday, May 29. I’m back from Opera Garnier! I hadn’t been there for ages – can’t remember when was the last occasion. The gap was due to the pandemic and shut down of all crowd-gathering places, of course, but only partly. Opera tickets are expensive, CDs are cheap, and laziness and temptation of staying-at-home prevails over hours in public transportation and coming-back-late. But it’s when you are force-deprived of something (rather than by choice or laziness) that you truly realize its value. Independent even of what’s being performed in the pit and on stage, what a beautiful place! Palace Garnier indeed… 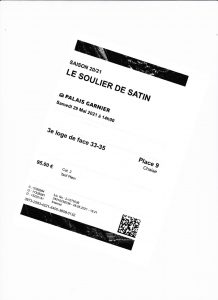 And the occasion was special too: not your customary Handel or Mozart (now that they’ve built the modern Bastille Opera, that is the kind of repertoire that is confined to the gilded Garnier), but a new opera by French composer Marc-André Dalbavie (a protege of Boulez, born in 1961): Le Soulier de Satin (The Satin Slipper), after the play of French 20th century playwright Paul Claudel (and ambassador, and erstwhile creative partner of Darius Milhaud in the 1920s, and brother of the famous sculptress Camille Claudel).

After I had bought the tickets and proudly annonced it to my companion, she balked a bit: “after Claudel’s play? How long is the opera?” I tried to reassure her: “don’t worry, it’s a contemporary opera, it’s probably not going to be over two hours”. Only then did I look at the indications on the Opera’s website: all compounded, intermissions and all: SIX HOURS! 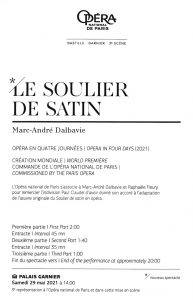 Playing on Saturday, from 2pm to 8pm… Claudel indeed! Does Dalbavie really think he’s Wagner writing Götterdämmerung or Meistersinger? And it is fortunate that the composer and his librettist made cuts! The original play may take 11 hours in performance… It is famous with theatre afficionados in France among Claudel’s output, if only for its unplayability: it is rarely staged, but when it is, it is by very prestigious directors in productions that are always memorable (yes, I’m sure even someone plagued with amnesia would remember spending 11 hours in a theatre): Jean-Louis Barrault in the 1940s to 1980s, Antoine Vitez, Olivier Py…. French playwright (and famous womanizer) Sacha Guitry famously quipped: “fortunately we got only one slipper, not the pair”…

Well then, we took an early and solid lunch, packed our bags with bottles of water and snacks, and off we went, not excluding the option of leaving at one or another of the intermissions if it got too boring. 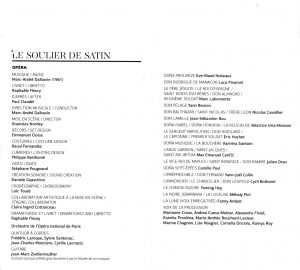 One positive thing I can say about Dalbavie’s opera is that it is easy to stay until the end. For a former protege of Boulez, the music is surprisingly un-aggressive, easy-to-take, and even, yes, “pretty”. It is filled with Ravelian delicacy, at one point there is a theme played by brass that immediately evoked Britten’s Passacaglia from Peter Grimes, and there are even moments that are quasi-tonal and romantic, including a beautiful duet between Doña Prouhèze (the female lead) and Doña Musique. One of the most fascinating passages was the “Monologue of the Moon”, with the mesmerizing pre-recorded voice of French actress Fanny Ardant.

But here starts the criticism. First, Claudel’s mystical Catholicism is, unless you are a mystical believer yourself, insufferable and close to the corny. What the hell is the matter with these two characters, Doña Prouhèze and Don Rodrigo. Can’t they just recognize that it’s only lust, lust made frantic by religious interdiction and social convention (she’s already married)? Do they really need to couch it in so much incomprehensible Catholic mysticism (I guess they do…). But hey, guys, satisfy yourselves with the thought that, had you mated, it probably wouldn’t have worked out very long between the two of you… we’ve all been there (at least most of us)!

And then, Dalbavie’s music. Okay, so it isn’t aggressive or “repulsive” (in the sense that it doesn’t make you leave the theatre at the first intermission or before). It’s pretty. But the word that came to my mind was also: inconspicuous (or anodyne, innocuous). Beautiful sounds, Ravelian delicacy that seemed, from scene to scene, inter-changeable, and with very little development or change between begining and end, as if (and this may be unfair, of course, it is the reaction from a single hearing) the composer didn’t have the resources or skills to write four and a half hours of music (that’s counting the two intermissions) of true variety.

Another thing bugged me throughout: Dalbavie’s setting to music of Claudel’s French prosody: he trivializes it. French every day language isn’t pronounced as “elevated” or “formal” French, e.g. the language of poetry, or of verse theatre, or even of the “uppity” (which today would sound haughty or snobbish) – and, as with English, it even further deteriorates as times goes. Without even mentioning the cuss words, the French equivalents of the F. word, that everybody today seems to think appropriate to adorn their conversation with, or the useless equivalents of “you know?” or “I mean”, many of the typical French so-called “mute Es” are elided (not pronounced), “liaisons” (pronouncing the last, and normally un-pronounced, consonant of a word, when it is followed by a word starting with a vowel) are not done.

What it does is that it vulgarizes the language – litterally: it makes it sound vulgar. But what is unpleasant enough in the everyday life (and I am not pretending that I do not follow the trend) becomes awful when it is imported into places where it doesn’t belong, like verse theatre, or the opera. And that’s exactly what Dalbavie does: his rhythmic setting to music of Claudel’s poetic language elides all the mute Es and skips all the liaisons. His characters speak Claudel’s language as if it were today’s everyday French.

Can’t entirely blame Dalbavie for doing so, when even the young (or not so young) generation of theatre people are total ignoramuses in those matters of French poetry and poetic pronunciation. Television won. But it shows, in my opinion, not only a terrible aesthetic taste (if you don’t feel that daily pronunciation is plain ugly and vulgar, and that following the rules of poetic pronunciation gives a musicality to the language that constitutes its beauty, then, sorry, you have no taste, and no culture), and not only a complete betrayal of the poet’s language, but also a fundamental misunderstanging of what theatre (or opera) fundamentally is: NOT “day-to-day reality” (or the actors/singers wouldn’t be “clowning” on a stage!!!), but a transfiguration of reality, to express things that remain concealed in reality. The language they speak or sing on stage sounds “artificial”? Sure it does! Everything on stage is “artificial”, singing out your phrases is very rarely done in everyday life and you probably wouldn’t hold on very long to your job if you fancied doing so, and those people on stage don’t actually die when they are killed! But the goal and challenge of the actor / singer is to make that “artificiality” sound entirely natural to the audience: not because it is the language of the audience; but because the audience accepts that it is the language of those characters who are “clowning” on stage. To put it in other words, to me the goal and challenge of the actor / singer (and composer!) is not to lower the poetic language to the level of their daily language, but to elevate themselves, and their audience, to the beauties of that poetic language. And that’s what Dalbavie’s vocal writing lamentably failed to do. The fact that the opera was surtitled didn’t help either (although it did help intelligibility), because I could read them first and pronounce them in my mind before actually hearing them, and hearing them was always a painful letdown.

Dalbavie’s vocal writing isn’t very original either: lots of quasi-parlando or even sprechgesang, and the customary upward-rising phrases when dramatic tension built, the stock-and-trade of vocal writing. It is hard to reconcile innovative vocal writing and intelligibility, even though, even there, the surtitles helped (although the surtitlist was terribly clumsy). The writing for the character of Doña Prouhèze also required a lot of chest voice from the singer, which wasn’t her best range.

Despite its length, not a very memorable moment then – maybe that’s why I’ve written this review, then. I must mention one special treat of the occasion, though: because all restrictions have not yet been lifted on crowd-gathering venues, Garnier was filled at only half, or perhaps one-third capacity (I don’t know if a contemporary opera would have drawn a larger audience otherwise, but let’s leave them the benefit of the doubt…). The incredible privilege that it was, not only to be in Palais Garnier, but to benefit from an 8-seat central 3rd balcony box… for just me and my companion!

I took the opportunity to pull out of my shelves two Dalbavie CDs, that I’ll try and review ASAP.