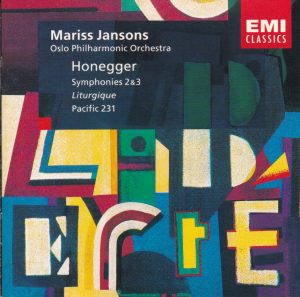 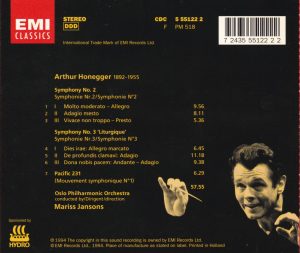 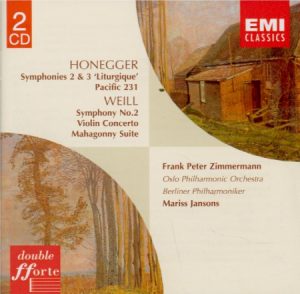 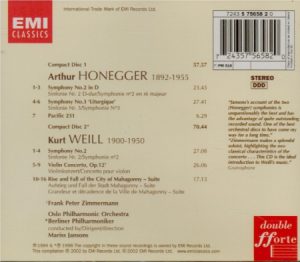 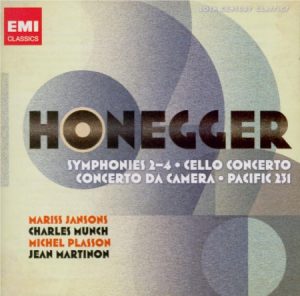 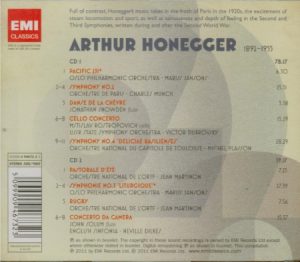 An excellent Symphony No. 2, an exceptional “Liturgique”
Originally posted on Amazon.com, 29 June 2013

Jansons and his Oslo strings, recorded at the end of 1993, offer an excellent 2nd Symphony, with outer movements that are moderately paced but powerful and vigorously articulated, and benefiting from a great clarity of the polyphony, with the responses of basses to trebble always registering clearly (although the sonic perspective makes the violins sound a bit distant – and more so than the basses). Jansons’ slow movement, on the contrary, flows forward at an even slightly faster tempo than Honegger’s metronome indication, retaining the sense of a (funeral) march that is lost in slower versions, and lacks only the intensity of the best versions, the very urgent Munch (in Boston in 1953 on RCA GD60685 or in Paris in 1967 on EMI) or the very slow Karajan (DG “20th Century Classics” or “The Originals”) and even slower Plasson (EMI), because of the lesser surrounding presence that the sonics afford his Oslo strings.

But if Jansons’ Second Symphony is a good one, his “Liturgique” (Symphony No. 3) can take place among the truly great ones, alongside Baudo‘s (1960, part of his complete traversal with the Czech Philharmonic for Supraphon), Mravinsky‘s (live 1965, various reissues from Melodiya), Karajan‘s (1969, see link above) and Järvi‘s (1992, Chandos). Jansons’ interpretation is in fact very similar to Järvi’s, in the camp of Mravinsky’s hectic urgency rather than Karajan’s deliberation and massiveness, but even more radical than both Mravinsky and Järvi in the outer movements. Like Järvi, Jansons benefits from great sonics, with vivid and potent brass that contribute tremendously to the mood of biting rage, and an orchestral piano that always comes out clearly and adds its incisive crispness to the orchestral palette. Curiously, as with Järvi there is one miss in the sonic pickup, the drum in the Finale between 4:33 and 4:59, which doesn’t strike with as much impact as it could and should (and does with Karajan and Mravinsky. But it seems that versions in which it truly registers substitute a snare drum to the tenor drum – “caisse roulante” – required by Honegger. If so, it is an appropriate choice). As with Järvi’s Danish National Radio Symphony Orchestra, Jansons’ Oslo Philharmonic sounds not like a second-tier orchestra, but like a major-leaguer.

In his choices of tempos, Jansons is marginally more extreme (e.g. urgent) than Mravinsky and Järvi in the first movement “Dies Irae”, equaling the hard-drive of Baudo in 1960 and fully conveying the sense of breathlessness called for by Honegger (“Day of Wrath! Violent themes come in quick succession without giving the listener a moment of respite. Impossible to breathe or to think“…); like Järvi’s, his slow movement flows at a pace close to the score’s metronome indication (the composer, in his recording from circa 1948, was markedly slower, and Karajan even more deliberate than that) and builds up to climaxes of great dramatic impact. But it is in the Finale that Jansons is the most remarkable, because there he is even more extreme, and the most urgent version ever committed to disc. There’s an interesting issue about tempo in the Finale. Honegger’s metronome indication is in fact very slow, 88 quarter-notes/minute. The composer himself didn’t follow it in his own recording, taking a faster beat of circa 100, and his biographer Harry Halbreich mentions a manuscript note in which Honegger even suggests a tempo of 112. After Honegger almost every one seemed to follow his lead,

Georges Tzipine in 1955 (a fine recording, made under the composer’s supervision, lamentably not reissued on CD) with a tempo of circa 107, Munch (live in 1956 in Prague with the Boston Symphony, and Munch’s only recorded testimony in that work, a recording made available by Multisonic) at circa 112, Baudo at circa 110 and Mravinsky the fastest of all at circa 116. Only Robert Denzler with Orchestre de la Société des Concerts des Conservatoires on Decca in 1955 (a great version and an unjustly forgotten one, once dubbed from LP to CD by the French label  Forgotten Records but at last reissued by Decca in 2015 on their mammoth 53-CD set 478 7946 “The Decca Sound – The Mono Years 1944-1956”, barcode 028947879466) and Karajan in his famous 1969 recording adopted exactly the tempo prescribed by the score, and the result was great, conveying a sense of formidable implacability. Järvi took it at circa 107, same tempo as Tzipine. Jansons? A phenomenal 124, eliciting an impression, as in the first movement, of breathtaking urgency, a race to the abyss. But it is not just a matter of tempo: Jansons’ Oslo Philharmonic is also formidably powerful. Jansons’ conclusive “Adagio” may not elicit the same ethereal beauty as Järvi’s or Karajan’s, but these are very subtle hierarchies. This is one of the great recordings of the “Liturgique”. It is interesting to note that, by some kind of serendipitous irony, Jean Fournet recorded for Denon, the same month as Jansons (December 1993), the most radically slow Liturgique Finale ever, one that marched at almost 20 beats below Honegger’s already very deliberate metronome mark – almost twice as slow as Jansons. Reaction and judgement will be a matter of personal taste: I find it extraordinary, lending the music a great sense of a a slow, despaired, burdened Funeral march of awesome power.

Jansons tops it off with a good performance of Pacific 231, of suitably epic proportion in its conclusion when the mighty horn theme erupts at 4:35. It is one that doesn’t slowly and heavily roll into motion like most including Järvi‘s (Honegger in his recording from 1930 illustrated another model, in which the mighty power of the machine overcame with more ease the forces of gravity and friction, see link above), but unfortunately Jansons doesn’t quite maintain the propulsive momentum, as Bernstein did (and was the last to do so, in 1962, reissued on Sony’s Masterworks Heritage MHK 62352 or  Sony’s “Bernstein Century” SMK 60695 “20th-Century French Masterpieces”), settling instead into a slightly more comfortable and unhurried pace. His version doesn’t either have quite the instrumental character and impact of Bernstein’s or Järvi’s – with Jansons some unexpected instrumental details are heard… and some expected ones aren’t heard as vividly as expected. Needless to say, these reservations are only relative, and Jansons’ version has great impact.

If you must have only one recording of “Liturgique“, choice between Järvi and Jansons must hang on what sets them apart, Järvi offering the best recording I’ve heard of the 5th Symphony (and I’ve heard almost all of them – not that there are many). Other possible choices are Mravinsky (a version of unequalled raw power) and Karajan (the recordings of Plasson and Baudo are also excellent, though with minor shortcomings here and there that don’t make them entirely top-tier). If it is specifically the pairing of 2 & 3 you want, the choice between Karajan and Jansons is a difficult one. The inclusion of Pacific is a factor in favor of the Latvian conductor, making a more coherent, all-Honegger program than Karajan’s Stravinsky Concerto in D on the reissue on DG’s “The Originals” series: the Stravinsy makes sense also, as it was a commission from the same Paul Sacher who commissioned and premiered Honegger’s Second Symphony, but there, Karajan’s idiosyncracies cross the line between interpretation and distortion. Karajan’s Liturgique is great but more idiosyncratic than Jansons. I have some issues with Karajan’s first movement of the Symphony for Strings, a certain thickness of textures and lack of bite at some points, but the second and third movement are great with no qualifications and overall I’d rate it higher than Jansons. But must one choose? They are very dissimilar interpretations and they complement each other. If that is the program you want, buy both Karajan and Jansons. In fact, for every work, the serious music-lover should have at least three versions, to get a fair representation of the many possible facets of a score: a middle-ground, and two extremes. Jansons (or Mravinsky) on the one hand, and Fournet (otherwise very similar to Karajan in the first two movements) certainly represent the extremes in Liturgique. I’m not sure who the “middle-ground” would be, though. Although they were sent nearer to the center by Jansons and Fournet, Karajan on the one hand, and Mravinsky, Järvi, Baudo and even Plasson on the other remain quite extreme in their own right – but in that music, by all means, they should.