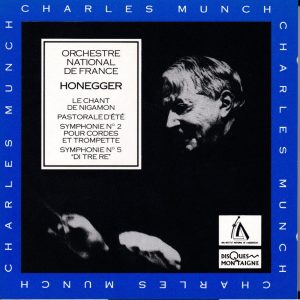 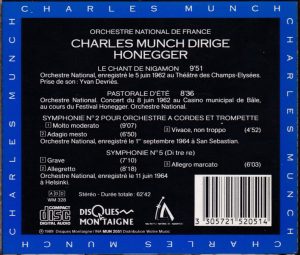 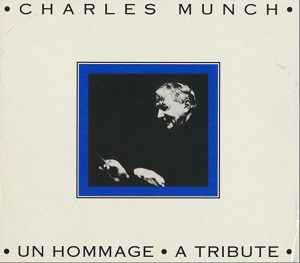 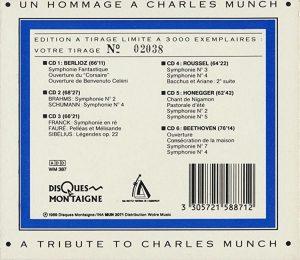 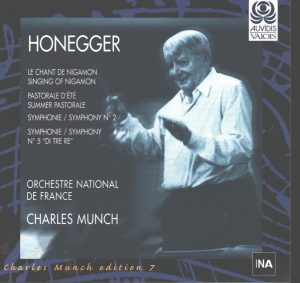 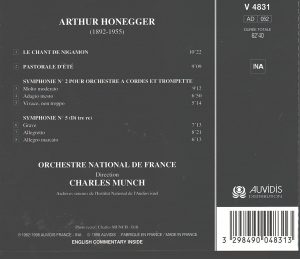 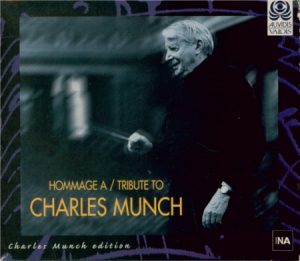 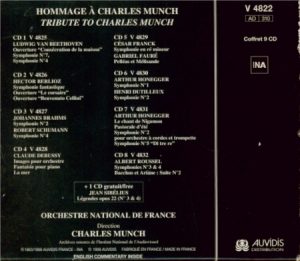 Not a first choice, but an important addition to the collection of Munch afficionados
Originally posted on Amazon.com, 19 March 2013

Munch was, with Ernest Ansermet, Paul Sacher and George Tzipine, one of the great early champions of Honegger and, with him having made pionnering and essential recordings of the composer’s Symphonies No. 2 (three in the studio, including the premiere recording in 1942-44 and the next one with the Boston Symphony Orchestra from 1953, the last one being Orchestre de Paris in glorious 1967 stereo) and 5 (with the Boston Symphony Orchestra in 1952), and with his BSO recordings of Nos. 2 & 5 paired on the same CD RCA GD66685, this disc, originally published on the Disque Montaigne label in 1989 and gathering live recordings culled from four concert performances given with Orchestre National in 1962 (the symphonic poems) and 1964 (Symphonies 2 & 5), must take the place of a simple complement reserved to the true believers (in Munch and/or Honegger). That said, it is an important, and possibly essential complement. In the symphonies the 1964 sonics don’t give a clear-cut advantage to the live recording over the 1952/3 Boston recording, because in RCA’s transfers those sound already great and very detailed. There’s a little more presence and vividness in the instrumental details of Orchestre National de France, but this is offset by the greater transparency of the Boston Symphony in the climaxes. Those of Orchestre National, especially in the 5th Symphony (recorded in Helsinki, 11 June 1964) sound congested.

On the other hand, interpretively, in the 5th Symphony, the live Orchestre National is certainly less tidy than the studio BSO, but Munch in concert generates significantly more high-strung tension. The first movement is very typical, and not only in its overall timing of 7:07 vs Boston’s 7:45. While Munch in Boston started very close to Honegger’s indicated beat of 48 quarter-notes/mn, with Orchestre National he is dramatically faster, circa 60. His acceleration to the big movement’s climax is also considerably more breathless and dramatic. Munch was a very instinctive conductor who let himself be carried (if not carried away) by the excitement of the concert, and you can hear it here. Compare also the 8:16 minutes of the live second movement (a mixture of a Scherzo and slow movement), to Boston’s 9:15, and Munch also applies a freer and more flexible rubato. And the same thing happens in the Finale, where Munch sets off at a tempo very similar to the one he applied in Boston, but progressively and imperceptibly accelerate to toss it off in 5:26, to his previous 5:57. It is all very exciting.

Comparison in the 2nd Symphony between Boston-Studio in 1953 and this live performance, recorded in San Sebastian on September 1 1964, doesn’t yield exactly the same observations, although Orchestre National manifests some interpretive choices that were often or always present in Munch’s recordings of the composition. Other than in his war-time recording (see my review of “La France Resistante” on Cascavelle), one of the abiding and distinctive features of Munch’s interpretation of the 2nd (I’ve also reviewed a live with the Czech Philharmonic from 1957 on Multisonic 31 0022-2, paired with Milhaud’s Music for Prague and Symphony No. 10) was always the very urgent tempo he adopted in the slow introduction of the first movement (“molto moderato” is the composer’s indication), lending the music an underlying sense of inquietude rather than the brooding mood imparted by the slower tempo of everybody else, and the rule is respected with Orchestre National. But what marks out this performance is the almost rhapsodic flexibility of tempo adopted in the viola melody that gives the opening its mourning character. Another feature is that Munch attributes, if my ears don’t deceive me, to solo viola the return of that very melody, at 0:39, where Honegger instructs “tutti” (the solo viola should emerge from the tutti at the end of that phrase, here at 1:38). He did the same in his 1967 studio recording with Orchestre de Paris.

Another abiding feature of Munch in Symphony No. 2 was always his urgent and biting Allegro proper (the movement then alternates between the brooding and the biting), and it is again here, launched by very vigorous bass attacks at 1:36, although Boston (and Prague live in 1957) were even more urgent and biting. With Munch, this urgency of approach always extended to the slow movement, turning it not into a mourning dirge like Karajan, but into a cry of revolt, or perphaps an omen of the impending doom, and this one with Orchestre National is the most urgent of all five (Boston coming in second, and Orchestre de Paris being the most spacious – all things being relative, it remained more urgent than anyone else’s). But, within that approach, another distinctive characteristic of this live performance is, again, Munch’s great flexibility of tempo: the tempo changes are subtle and organic and the inattentive listener might not perceive them, but hardly a bar is taken at exactly the same tempo and Orchestre National is formidably responsive – after all, this is not a keyboard, it is 80 players trying to play together. Another characteristic, shared with the later Orchestre de Paris, is that (again if my ears don’t deceive me) Munch attributes to solo cello the great melody starting at 0:44; here again Honegger doesn’t instruct to do so, but Munch obviously takes his cue from the return of that melody at 4:54, now indeed indicated “solo”. Until then, even in Prague in 1957, Munch had been more observant of the score, but it was a great idea to have the solo cello play, it lends the music great pathos. As in the first movement, Munch’s Finale with Orchestre National may not quite reproduce the urgency and bite of Boston, but it still has plenty of bite and urgency, and the French musicians cope well.

Despite the few vagaries of execution and sonics and few audience noises inherent to live performances, these are fine renditions then of these two symphonies, although the Boston recording may be preferred, if only for its historical importance. But it is really the two symphonic poems, “Le Chant de Nigamon” and “Pastorale d’été“, that are the important additions to Munch’s discography: he left no studio recordings and these are the only live ones that have surfaced so far. Munch’s very spacious and leisurely Pastorale (but also strongly contrasted in the middle joyous section) had all the potential to be a hugely atmospheric one, if it hadn’t been for the rough-hewn timbral nature of the French orchestra in 1962, unduly exposed by the crude sonics, and the wrong balances (at times you hear the harmonic underpinning of bassoon better than the essential but almost inaudible solo horn, for instance). As it is, this is the blueprint of the great version that Munch might have given in Boston but, regrettably, never did.

“Le Chant de Nigamon“ is based on a novel that had been succesful thirty years before its composition, Gustave Aimard’s Le Souriquet (1882). Nigamon is the Iroquois chief who was burnt at the stake and scalped (in that order) by his victorious Huron ennemy Terah, and still manages to chant after that – there’s no denying that the unpolluted air and healthy outdoors life of untarnished early America kept them alive and strong back then. A student’s work written in 1917 while Honegger was still in the composition class of Vincent d’Indy at the Paris Conservatoire, Chant de Nigamon is one of the composer’s most violent utterances (incredible to think that d’Indy praised it – at least reading the score, his reaction upon actual performance, which happened only three years later, hasn’t been recorded). Honegger uses authentic Huron melodies, but the listener doesn’t need to know, and also a rhythm that sounds exactly like Wagner’s anvil music in Rheingold’s descent to Niebelungsreich, and recalling also the climax of Dukas’ Sorcerer’s Apprentice. Munch leads a powerful and intense performance, the orchestra acquits itself bravely, a few details of the orchestration get blurred in the loudest tutti but a lot comes through, the French oboes sound very French, e.g. unelegant, pinched and nasal, but that’s a very small detail. At 2:31 you can hear an unwritten instrument – it is Munch humming.

For Honegger and Munch afficionados then, but an important addition to their collection.