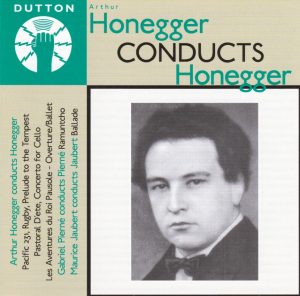 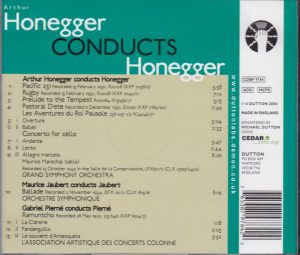 Composer has unique insights about his own works… and sometimes not. Better reissues elsewhere
originally posted on Amazon.com, 6 March 2013

Imagine that the recording process had been invented at the end of the 18th century and we had recordings of Beethoven, Brahms and Mahler conducting their own works. What documents they would be (with Mahler it almost could have happened; there are a few piano rolls). Maybe not the last word, but certainly an invaluable first word. That said, hearing Arthur Honegger conduct his own works (recordings made in 1930 and, in the case of the Cello Concerto, 1943), the composer sometimes has unique insights on his own compositions… and sometimes not.

In the case of Pacific 231 and Rugby (recorded 13 February 1930), naturally the antique sonics can make these versions no more than documents: Honegger’s dense and intricate orchestration calls for modern stereo, and it is only with Bernstein‘s 1962 recording that everything could be heard for the first time (paired with Milhaud: Les Choéphores and Roussel: Symphony No. 3 on Sony Masterworks Heritage MHK 62352 or on Bernstein Century: French Masterpieces, Sony SMK 60695). Still, in the case of Pacific, the conductor brings out unique touches from his own composition, that have never been emulated in the dozen of subsequent recordings that I’ve heard. Nobody like Honegger has the opening sforzando string harmonics phrased with such a sharp bite. Very few (Tzipine in 1953, on French EMI’s Les Rarissimes de Arthur Honegger) have the stopped trumpets’ staccato accompaniment figure at 2:25 (measure 109 and following) played with such a nasty snarl. And the piccolo flutes at 2:36 are piercing. But, other than those details, there is one thing that Honegger shares with his predecessor Piero Coppola who had made the premiere recording in 1927 (on Dante’s Piero Coppola Collection  Vol. 3 – La Musique Française XXe Siècle, Dante Lys 373, published in 1998), and that no subsequent version has quite recaptured: propulsion. By his own description the locomotive that Honegger had in mind (describing in musical form not so much its actual sounds, as the physical impression conveyed by the machine) was a “heavy-weight, high-speed” engine, and he also talks of the “lyrical state, the pathos of the 300-ton train hurled in the middle of the night at 120 kilometers an hour” (yeah, in 1921, that was fast). Later versions concentrated more on the weight and on bringing out all the details of the orchestration. They all emphasise, for instance, the machine’s slow rolling into motion – but not Honegger, with him the energy is more powerful than the forces of gravity. Typically, Coppola and Honegger completed their ride in, respectively, 5:54 and 5:56. No subsequent version that I’ve heard made it under 6:00 (Bernstein), and none more acutely than Coppola and Honegger made Pacific sound so close to Mossolov’s Iron Foundries or the final Danse Sacrale from Stravinsky’s Rite of Spring. Michael Dutton’s transfer has left an awkward side joint at 3:28. Obviously the original recording came on two sides of a 78rmp, but a half-measure was repeated at the beginning of side two, and Dutton left it in. Despite all the imperfections (with in particular a tuba way out of its depth – literally – at 4:46) and lack of precision in orchestral playing, the same dynamic propulsion is at play in Rugby – although, here, in 1954, Hermann Scherchen displayed even more (on Westminster’s “Honegger: Pacific 231/ Stravinsky: Petrouchka”).

On the other hand, the one striking thing about Honegger’s self-conducted Pastorale d’été (and not “PastoRAL d’été” as the track listing puts it, recorded 6 December 1930), is how bad and unatmospheric it is. It’s not just that this atmospheric music is played by an orchestra undistinguished in ensemble and in tonal production: it is how, taken at a pressing tempo (the one indicated in the score… Honegger the conductor is here very observant of Honegger the composer), rhythmically square it sounds, never letting you forget the underlying sense of a 1-2-3-4 beat given by the underpinning cellos. Sometimes composers know better… and sometimes they don’t seem to be aware of what they composed. Dutton’s transfer is pretty bad too, with the kind of dessicated sound resulting from excessive filtering. I can’t believe that more could not have been pressed out of the original surfaces. To hear the same kind of approach in modern sound, go to Martinon in 1971 (first CD edition 1991  EMI “L’Esprit français” CDM 7 63944 2 with Cantate de Noël, Pacific 231 and Rugby). The Prelude to the Tempest (composed in 1923) isn’t very good either. Recording date is not given for this one by Dutton but the entry under worldcat.org indicates a publication in 1931, 78rpm Odeon 238.261 – matrix KI 3936 and KI 3937. Even if the orchestra had had the virtuosity to play it truly tempestuously, the congested sonics could not have offered much more than the impression of watching a storm on a black and white movie screen. To LIVE a furiously tempestuous storm, mono notwithstanding, one had to wait for Scherchen‘s extraordinary recording in 1954 (see link above), which nobody since has emulated, whatever the added impact of stereo.

The 1930 Cello Concerto is one of Honegger’s most lyrical works, bringing to mind Bloch’s Schelomo, except in its finale, aggressive and playful in a manner often remisnicent of Stravinsky’s neo-classicism. Here Honegger and the dedicatee Maurice Maréchal contribute an excellent reading, rather urgent but fully conveying both the composition’s lyricism, the impassioned vehemence of the slow movement, the cocky playfulness of the finale. The 1943 recording (13 October) is also better and lets many orchestral details come through. Maréchal plays the ad libitum cadenza – his own version. Most subsequent recordings omit it. Maréchal’s version is great, it sounds like it could have been excerpted from Kodaly’s solo cello Sonata, and he plays it with great pasion too. It should be mandatory. The Finale isn’t cued right (the cue has been mistakenly placed in the middle of the slow movement). It starts at 2:56 into track 9.

I haven’t done the same kind of comparison with the two short excerpts of Honegger’s operetta from 1930 “The Adventures of King Pausole” – this is the lighter side of the composer. Recording date not given but research indicates 31 December 1930. Here the reissue is frustrating because there were three original 78rpms on the label Odeon, one collated here with the Overture and a ballet and two with Arias sung by the premiere performer Dorville and Gabrielle Gills (and the “Odeon Operetta Orchestra”), not included. For fillers and a TT of 65 minutes Dutton offers Maurice Jaubert’s Ballade (recorded 2 November 1934) and three excerpts from Gabriel Pierné’s Ramuntcho (28 May 1929), both conducted by their respective composer. Ramuntcho is the incidental music written in 1908 for a play based on a once-famous novel by Pierre Loti from 1897. The novel takes place in the Pays Basque, on the French-Spanish border and gives Pierné a chance to write entertaining Spanish-colored music as had been in vogue in France since Bizet (Don José is from Pays Basque also) and Chabrier. But the third excerpt, “the Convent of Amezqueta”, is beautiful pastoral music that could have been penned by Vaughan Williams. Maurice Jaubert was a famous composer of film music, whose life was tragically cut short at 40 when he was killed on the front on June 19, 1940, on the eave of the cease-fire by which France admitted its crushing defeat to Germany. George Antheil once commented that when a classical music composer writes music for film, the style always creeps into his “serious” music, and it does in Jaubert’s Ballade (but in fact Jaubert was a film music composer who wrote “serious” music), which could easily be some symphonic suite from a film score: entertaining, but not substantial.

Dutton’s product info is frustrating in not indicating explictly the original labels, just the label and matrix numbers. 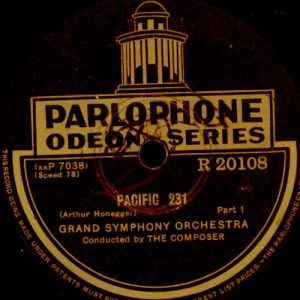 Turns out that, for the Honegger recordings from the 1930s except the excerpts from Pausole, they used British releases on the Parlophone label rather than the French original ones on Odéon

. Maybe that explains why Pausole sounds a little better than the rest. These same Honegger recordings – all or some – were also reissued by Music & Arts, CD-767 (1993), Alpha (802, from 2008), Pearl (“Honegger and Milhaud, Conduct Their Own Music”, GEMM CD 9459, 1993, barcode 727031945925) and EMI on its “Composer in person” series (with pieces of Poulenc, 5 55036 2, barcode 724355503626). I am missing only the Pearl edition to compare. For the others, sources and transfers differ.  Music & Arts uses French Odeon for Pastorale d’été and Pausole, English Odeon for Tempest and American Columbia for Pacific and Rugby, Alpha, in Pacific and Rugby, uses the sources from the library of the French public radio, e.g. the French Odeon releases. Usually Dutton’s transfers have more highs and sound brighter, but the price to pay is the artificially dessicated background in softer passages that points to excessive filtering, pretty awful especially in Pastorale d’été, but also fairly annoying in the Pausole excerpts. in Pacific and Rubgy, Music & Art’s transfers have left more surface noise than Alpha’s, but those of Alpha are slightly more muffled. Music & Arts also botches the side joint in Pacific, though not as conspicuously as Dutton; only Alpha gets it right. In the Cello Concerto and Pastorale d’été, Dutton has a hair less surface noise and added clarity than EMI, but their transfer also runs a touch faster – as far as I can tell EMI is more on the right pitch.

But it is really what is NOT shared between those reissues that is going to be the discrimating factor. Honegger recorded just a little too much of his own orchestral music to fit on a single CD, and all reissues miss something. Music & Arts seems to me the most attractive: it leaves out the Cello Concerto, but it is in favor of the circa 1947/48 recording of the Third Symphony “Liturgique“, and to boot it adds the early (1929) recording of Honegger’s wild early symphonic poem “Le Chant de Nigamon“, not conducted by Honegger but by Rhené-Bâton, and it is the only reissue of the latter that I am aware of. Alpha also has the Liturgique in addition to Pacific and Rugby, but substitutes rare Honegger songs to Music & Art’s Pastorale, Tempest Prelude, Pausole excerpts and Chant du Nigamon. Pearl has only Pacific, Rugby, Pastorale and Tempest, EMI only Pastorale and the Cello Concerto. All those reissues other than Music & Arts and Alpha are also less coherent, complementing their Honegger with works by other composers, Poulenc (EMI), Milhaud (Pearl) or Jaubert and Pierné (Dutton). Finally, between Alpha and Music & Arts, I find the latter’s all-orchestral program more coherent. The best of all worlds then would be to cumulate the Music & Arts and EMI releases, which would entail only the duplication of Pastorale d’été, and of course the loss of the Pierné and Jaubert pieces on Dutton and of Pearl’s Milhaud – but part of the latter can be found elsewhere, especially on Dutton – and of the songs on Alpha.