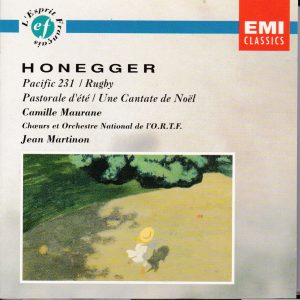 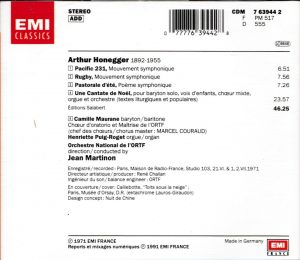 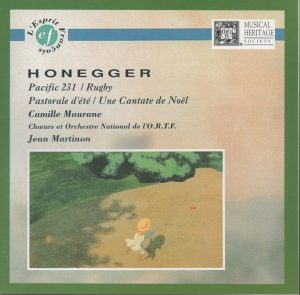 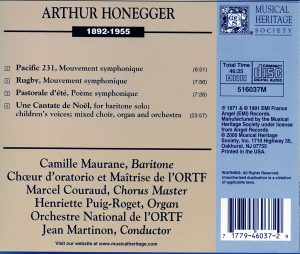 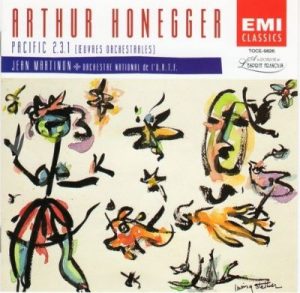 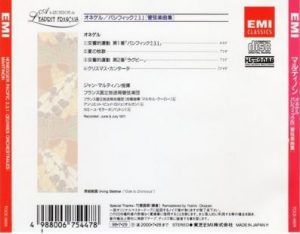 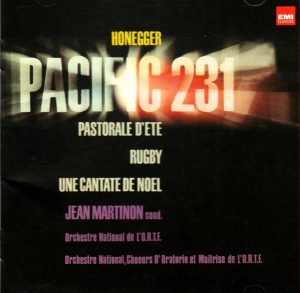 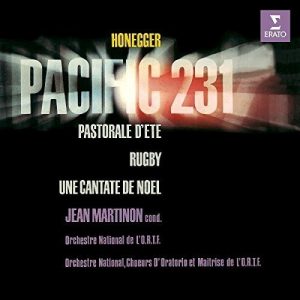 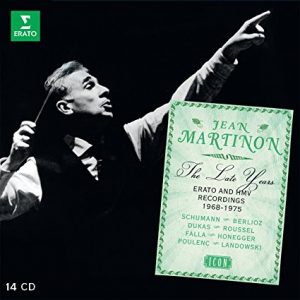 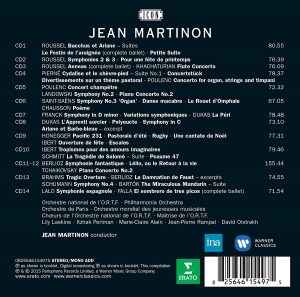 Interpretively superseded by much from before and after
Originally posted on Amazon.com, 27 July 2013

Unlike Ernest Ansermet, Charles Munch, Georges Tzipine or even Louis Fourestier, Jean Martinon isn’t a conductor associated with Honegger. Other than a recording of the short “Pastorale d’été“, made with Orchestre Lamoureux for Philips in the early 1950s, I am not aware that he recorded any other Honegger than this 1971 program with Orchestre National. And if he programed any during his tenure with the Chicago Symphony Orchestra, it hasn’t yet been made public on disc.

He offers a good Christmas Cantata, with a few shortcomings however that prevent it from being on a par with the greater ones, Ansermet’s from 10 years earlier (first CD reissue 1991 on Decca/London “entreprise” 430 350-2), Michel Corboz in 1989 (Erato with La Danse des Morts) and those of Martin Neary (1987, EMI) and Thierry Fischer (2007, Hyperion). Martinon has the advantage of sonics that allow for many orchestral details finally to come through, that were covered by the chorus in Ansermet’s 1961 recording as well as in Baudo’s from 1966 (Supraphon, paired with Jeanne au Bûcher), and still are to an extent in Corboz’ recording. But it is a trade-off: on the other hand there are spots where Martinon’s sopranos don’t come out enough, and the passage starting at 11:29 is very typical: the slightly mischievous oboes come out felicitously (they are hardly audible with Ansermet, and totally inaudible with Baudo and Corboz), but the sopranos’ florid melisma on the words “gloria in excelsis deo” is hardly audible. Ideally you’d get both, of course, and if you really have to choose, it is better to have the sopranos. In the jubilant “laudate dominum omnes gentes” chorus starting at 18:44, Ansermet’s chorus has much more presence and impact (and Ansermet’s pacing is wonderfully energetic and jubilant), and in general in Martinon’s sonics the clarity of instrumental details is obtained thanks to a more recessed, less powerful-sounding chorus. But above all that, Ansermet has the advantage of baritone Pierre Mollet, more youtfhul sounding and tender than Camille Maurane. Maurane is a great singer of course and as accomplished stylistically in “musique française” as Mollet, but 1971 is a bit late in his career (he was sixty by then), and while still remarkably sustained the voice is timbrally dryer. Corboz’ Gilles Cachemaille is also very fine, if not as movingly tender as Pierre Mollet.The anonymous solo child who sings the line “laudate dominum omnes gentes at 16:55 has only one bar to sing, but he is particularly touching (Ansermet has the line sung by the children’s choir). Giving the Christmas Cantata only one cue was really stingy and lazy from EMI. The piece may be in one continuous movement, but it’s easy to distinguish numerous different sections. But in truth, almost every recording does the same, and none do better than three cues (Ansermet, Jurowski).

The rest of Martinon’s Honegger program is interpretively more disappointing. Seeing the drawing that Honegger scribbled at the top of his manuscript score (reproduced in the Eulenburg pocket score) or photos of Pacific 231 locomotives, you expect those machines to be heavyweight and slow to get moving but to be really zipping fast when running full speed – and you’d be absolutely right: I had always thought that a Pacific was a certain brand name, like Porsche or Boeing, and 231 the model number, like 911 or 747. Not at all, a search on Wikipedia shows that 231 is, in French classification, the generic name for all steam locomotives with four leading wheels on two axles, six powered and coupled driving wheels on three axles, and two trailing wheels on one axle (in English classification, based on number of wheels rather than axles, 4 – 6 – 2s), and that 231s are also called Pacifics. And, explaining his piece (not so much an imitation of the sounds of the locomotive as a description in a musical construction of the impressions born from the physical experience), Honegger said that he had chosen for subject the Pacific, “symbol 231, for high-speed heavy train“. But Martinon’s Pacific is none of the above. Its textures are transparent – which is fine, since it lets you enjoy many details of Honegger’s dense orchestration – but also lightweight and almost balletic, which may be interesting as “another view”, but still, seems way out of character. And while slow to move, it never gathers much momentum. The timings tell: the composer recorded it in 1931 and completed his ride in 5:56 (see my review of Music & Arts CD-767), Scherchen in 1956 took it in 6:21 (reissued to CD on Westminster 289 471 245-2), Bernstein in 1962 (then, and still today the best version,  paired with Milhaud: Les Choéphores and Roussel: Symphony No. 3 on Sony Masterworks Heritage MHK 62352 or on Bernstein Century: French Masterpieces, Sony SMK 60695) at 6:00. Martinon: 6:45. Don’t take Martinon’s train if you’re late.

And his rugby match must have been the veterans’ jubilee rather than the final playoff of the Five-Nations Championship. A comparison with Honegger’s own recording, made in 1930 (see link above to Music & Arts edition), or with Piero Coppola’s who made the recording premiere a year before (on Dante’s Collection Piero Coppola, Vol. 3) – both take 7:10 -, or with Scherchen’s in 1954 (7:03), or even with Bernstein in 1962 (7:21) is telling. Martinon trails at 7:55. That said, the 1971 sonics are stupendous, letting you hear all the details of Honegger’s orchestra, and with a touch of glare especially on the brass that is perfectly appropriate.

One thing you can say in favor of Martinon’s Pastorale d’été, other than, again, its great sonics (to the point of spotlighting somewhat artificially the solo flute and clarinet), is how close it is, in its choices of tempi, to the composer’s own recording from 1930 (Music & Arts again) – e.g. relatively pressing, never letting you loose the underlying sense of a 1-2-3-4 beat from the underpinning cellos, and ultimately strong on joy and brilliance (especially in the central section “vif et gai” starting at 3:00, which Martinon animates even more than Honegger) but a little short on atmosphere.

Even in the LP era the rarer “Mouvement symphonique No. 3” (the third pendant of the triptych also represented by Pacific 231 and Rugby) could have fit on the LP. For a CD, the TT of less than 47 minutes is stingy, adding a factor to the, ultimately, lack of true appeal today of this CD. Better versions of all those pieces can be found elsewhere.