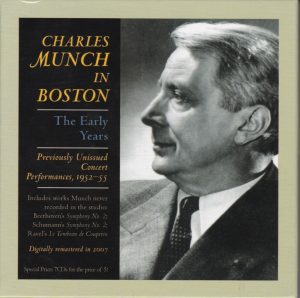 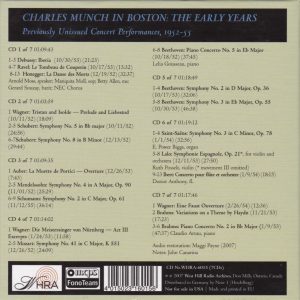 If only for Honegger’s Danse des Morts, this set would be worth the purchase
Originally posted on Amazon.com, 20 March 2013

I’ll return to this set (released in 2007) in due time (which may be in twenty years from now), it offers lots of goodies, the most valuable being the compositions that were not hitherto represented in Munch’s discography, studio or live: incredibly (given Munch’s commitment to Ravel) Le Tombeau de Couperin from 17 October 1953 (although there simultaneously surfaced a live performance with the NBC Symphony Orchestra from a few months later, Guild GHCD 2327, with Debussy’s Ibéria and Roussel’s Bacchus et Ariane Suite No. 2), Wagner’s Faust-Overture (26 February 1954), Meistersinger Act III excerpts (24 June 1953) and Prelude & Liebestod of Tristan & Isolde (11 October 1952 – in 1957, Munch recorded it in the studio, but sung by Eileen Farrell, here it is the purely orchestral version), Schubert’s 5th Symphony (same concert as Wagner), Schumann’s Second Symphony from 12 November 1955, Mozart’s Jupiter (26 December 1952), Lalo’s Symphonie espagnole with Ruth Posselt (11 December 1953), Ibert’s Flute Concerto with Doriot Anthony (apparently not yet “Dwyer” when the performance happened on 9 January 1954. The informative Wikipedia entry doesn’t say when the addition came about, I suppose but am not certain that it is her married name) and Brahms’ Haydn Variations (21 November 1953).

But at this point and without further delaying I just want to say that West Hill Radio Archives’ set is indispensable not just for that, but for its inclusion of Munch’s live 19 December 1952 performance of Arthur Honegger’s La Danse des Morts, CD 1 tracks 8-13.

Now, La Danse des Morts is not an unknown in Munch’s discography. In fact, the version he recorded on 27 and 28 March 1941, in German-occupied Paris, shortly after the world premiere (under the work’s commissioner Paul Sacher, in Basel, 2 March 1940) and Munch’s French premiere (26 January 1941), is one of the conductor’s most famous recordings (see my review of “La France Resistante” on Cascavelle). Munch was, with Sacher and Ernest Ansermet, one of the early champions of Honegger (and so was Serge Koussevitzky, but lamentably there are, to the best of my knowledge, no recorded testimonies of the Russian conductor in the music of Honegger), and although rarely recorded, La Danse des Morts (on a text of the famous French poet, playwright and diplomat Paul Claudel, also the author of the book of Joan at the Stake) is one of the composer’s most powerful and impressive works.

It is in itself, but gained that status also through the extraordinary power of Munch’s wartime recording, with utmost commitment of all involved and especially the choral forces, the moving plangency of baritone Charles Panzera in the Lamento, and above all the extraordinary acting of Narrator Jean-Louis Barrault – France’s Lawrence Olivier, so to speak. There was, with Barrault, a kind of histrionic grandiloquence which was ideally suited to Claudel’s text and Honegger’s music, and that was possible in an era when the radio dominated, but probably wouldn’t be anymore today. I think the reason why La Danse des Morts has so rarely been recorded since is that everybody tempted feels that it is impossible to better Munch’s recording and Barrault’s rendition. Michel Corboz recorded it in 1989 on Erato and Edmon Colomer in 2002 on Calliope, good versions if lacking the extraordinary power and bite of Munch, but that both stumbled on weak narrators, nowhere near the hallucinated prophecies of Barrault.

But Munch’s recording isn’t either without terribly frustrating flaws: because of the antiquated sonics all the orchestral details must be imagined rather than actually heard, the chorus is often incomprehensible, and there are cuts – small ones in the orchestral introduction and a substantial one, involving the speaker’s text, in the fifth movement “The Response of God”.

And this is why WHRA’s publication is so important:

1. It is uncut. At last Munch’s performance of the COMPLETE Danse des Morts.

2. Not just “for their vintage”, the sonics are great, offering remarkable clarity and letting you hear all those orchestral details that were inaudible in the studio recording, and for some even better than in Corboz’ recording from four decades later. It is particularly impressive in the powerful Danse itself, into the first movement “Dialogue” (kudos to WHRA for having cued it specifically, track 9). It is a small but telling detail, that the sardonic woodblock that enters at 1:20 was never heard in the 1941 studio recording. Only in the thickest polyphony of voices are not all the threads clearly heard – small price to pay. And for the first time, hearing the 6th movement, “Hope in the Cross” (beginning of track 13), with its hushed, high-pitched violins and soprano singing Claudel’s mystical text, it strikes me: this is not Honegger, this is, completely, Messiaen (Messiaen, a prisoner of war, was released of his detention camp in Germany too late, in May 1941, to have heard Munch’s Paris performances, and anyway “L’Ascension” and “Les Offrandes Oubliées” predate by a number of years Honegger’s Danse des Morts).

3. And it is, also, a great performance. Speaker Arnold Moss may not have quite the dramatic impact of Barrault, but he’s not far behind, and I can vouch that his French accent is more than acceptable (the greatest tribute I can pay to him is that there are far more moments where he could pass off for genuinely French, than those where Americanisms can be heard), and likewise for the “NEC” Chorus (WHRA doesn’t explain, track listing and recording info is limited to what is shown on the case’s back cover, but it is the New England Conservatory Chorus). Gérard Souzay in the “Lamento” (track 10) and passages of “Hope in the Cross” (track 13) may not have the touching plangency of Panzéra and the voice is dryer, but nobody will be short-changed by the substitution. Soprano Mariquita Moll, in “Hope in the Cross”, is better than Paris’ Odette Turba-Rabier, a more touching and purer voice, less affected style and a fine French accent too. Munch may not be as constantly high-strung as in Paris, but there is added subtlety and flexibility in his gear changes, and when the music requires power, as in the explosions of the final movement, “Affirmation” (here not cued, 7:53 into the last track), Munch has the orchestra strike like the whip of God, making his studio recording, or any other, sound tame in comparison. It is breathtaking.

So my only regret is that in the Lamento, for some reason, Munch has (if my ears don’t deceive me) the beautiful melody attributed by the score to solo violin played by a fuller section. Maybe he feared that the solo violin wouldn’t be heard in Symphony Hall (that it was performed there is an information not provided by WHRA, but retrieved from James H. North’s great Discograpny of the Boston Symphony Orchestra, Scarecrow Press 2008, ISBN-13: 9780810862098). A small proviso in an altogether essential addition to the discography of Munch, of Honegger, of classical music. A more substantial qualm, not for me (since I am a French speaker and have the – expensive – score), but for American audiences: the absence of the text with translation in the booklet (you don’t have them either in the CD reissues of Munch’s studio recording, but they are provided in the modern Erato-Corboz recording; the Colomer-Calliope has only the French text). Still, this Danse des Morts would alone warrant the purchase of the full set – so it is great bonus that it offers far more. Don’t miss it.