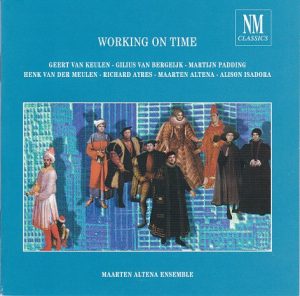 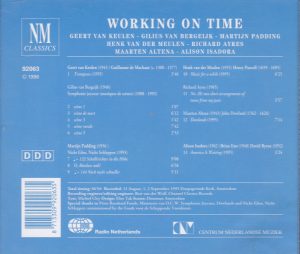 Nice concept, but even better than the concept: the compositions it gave birth to
22 October 2016

“Working on Time”. The title is as clever as it is punning. All these works play with and elaborate on, in one way or the other, the past, e.g. musical history. Some are direct elaborations on time-hallowed compositions – Machaut’s “Ma Fin est mon commencement” in Geert van Keulen’s Trompeau (1995), Purcell’s “Music for a While” in Henk van der Meulen’s same-titled composition (1995), two songs of Dowland in Maarten Altena’s Dowlands (1995). Martijn Paddin’s Nicht Eilen, Nicht Schleppen is a commentary on the huge symphonic forms of Mahler. The past is not so distant in Alison Isadora’s America is Waiting: Isadora is the violinist from the Maarten Altena Ensemble and her piece is an arrangement for the Ensemble’s line up of Brian Eno and David Byrne’s famous and brilliant song from their ground-breaking 1981 album My Life in the Bush of Ghosts. And the past is the composer’s personal recollections in Richard Ayres’ No. 20: two short arrangemetns of tunes from my past, on of the Irish traditional song “The Rocky Road to Dublin”, and the other an unreferenced melody heard by the composer at a party. The one-piece somewhat out of the pattern is Gilius van Bergeijk’s Symphonie joyeuse (“Merry symphony”), written between 1988 and 1992, with some stylistic references to Renaissance music or Bach but to no specifically identified pieces, and whose link with the past is principally to be a symphony in the old meaning of the word, “sounding together”, a “confluence” (as the liner notes put it) of sparse, independent voices.

The risk of course of that kind of concept is to result in music that is mere pastiche, or the kind of “Music in the old style” that was illustrated by many 20th century composer and turns out most of the time to be the excuse to write old music. Schnittke went a step further in his own elaborations on baroque music, which started with his Concerto Grosso No. 1, but his style was then to quote or imitate directly baroque forms then “skid” into anxiety-ridden contemporary music, sort of as the most beautiful woman in the world tearing off her mask and revealing the face of Freddy.

But not so here: even better than the concept are the works that it gave birth to, because each is fully contemporary in its language and and each offers its fascinations. The music of Machaut is almost unrecognizable in Van Keulen’s elaboration, which pits a very melismatic soprano voice singing Machaut’s words so slowly that they sound like a wordless vocalise, and very pointillistic and dance-like interjections from the instrumental ensemble. Van der Meulen’s Purcell elaboration turns it into aggressive progressive rock, filled with violent instrumental whiplashes, with the text (soprano again) first reduced to shards, then fully revealed in its heart-rending beauty. Altena’s arrangement of two Dowland songs is the one that sounds the most like a “traditional” orchestration, but the sonic result is very taking, with (playing by ear) its fiddle playing on whistling harmonics, recorder and contrabass (with a softness of sound that would almost make me confuse with a bass clarinet) over softly tolling cow bells (or gamelan?). The liner notes talk about electric guitar, but I don’t hear it.

I don’t have much info about Gilius van Bergeijk and don’t know what relates him to French and France (titles and texts are in French) and the liner notes don’t tell much about his symphony, but the titles of each movement (“scenes”) and the fact that it was composed over a number of years sugguests that it is the conflation of works written on various occasions, possibly with a theatrical purpose. Despite being described as a symphony it is scored for small ensemble and there is in the first movement what might be heard as stylistic references to Renaissance music, and in the third movement clearly to Bach, with vocal scatting reminiscent of the Swingle Singers. But the highlights are the two slow movements: the second is slow, sparse, soft, mysterious, funeral, with long-held tones, soft tinkering of bell, and hauntingly mysterious, conveying the impression of slowly drifting along the Styx River into the Nether, music for Jim Jarmush’s Dead Man. The second movement is much in the same, soft and sparse vein, with a softly tinkering celesta, evoking the end of Mahler’s 9th Symphony. The last movement is also quite original, starting with the soprano whispering at the threshold of silence (it’s in French, but the words are almost inintelligible – it starts with “il y a du silence”, “there is silence”) over softly pealing drum. Too bad the texts aren’t identified nor reproduced in the booklet. (unlike for the other pieces) – but I think I understand why: a Google search on the few words I could make out reveals that it’s an excerpt from Albert Cohen’s Belle du Seigneur, and I suspect van Bergeijk and/or Emergo didn’t get the rights. It evolves in some spoof of a drill march from the French Royalty or Revolution. I was intrigued enough by Van Bergeijk’s music to immediately order another disc of his, Gilius van Bergeijk vol. 1 on the label X-OR CD 07, barcode 786497170920.

Compilng discographies of Dutch labels logically leads sometimes to the same composers, and it happens that just before this disc I listened to the 3-CD collection of the Dutch New Trombone Collective on Etcetera KTC 1355. The collection offers no great revelation – except for the piece by Martijn Padding, And the trees would sing for tenor and trombone quartet, my first encounter with the composer and his music, very original it its choice of text (the description by a friend of Dylan Thomas of what would have been the opera he discussed with Stravinsky one afternoon of 1952, which never got beyond that discussion) and very taking it its musical setting. Padding’s Nicht Eilen, Nicht Schleppen is also a very original, non-imatitve, non-slavish take on Mahler. He strips the Mahler symphonic outlook of all of its mass and grandeur, strips it “to the bone” as he says himself as in a “Dance macabre”, and retains only, as sung text, some of the tempo and character indications given on the scores, “nicht eilen” (do not rush), “nicht schleppen” (do not drag), “schallrichter in die Höhe” (bells up). The instrumental accompaniment is very rock, jagged and brutal – and I sure hear the electric guitar here. You can hear whiffs of Mahler (especially from the first movement of the 2nd symphony), but distotrted by the instrumentation almost beyond recognition. The second movement is a soft interlude on “Urlicht”, the song sung by the alto in the third symphony, with very sparse instrumental accompaniment, interrupted by spoken voice reciting excerpts of Alma Mahler’s account of the last days of Mahler. I’ll be on the lookout for more music of Padding.

I already knew the music of Richard Ayres – an English composer established in the Netherlands and a student of van Bergeijk – and enjoyed tremendously its no-holds-barred rowdiness and cockiness. His first song, where brass and piercing woodwinds dominate, is exactly that (it strikes me that it’s exactly the effect of a bagpipe band – and if you’ve never heard a bagpipe band, you’ve never heard the cry of a beast from Netherland). The second song is scored for solo fiddle and drum and sounds like a romping jig.

I didn’t know, or if I knew it hadn’t heard since the early 1980s and forgotten all about Eno/Byrne’s America’s Waiting. I listened to it on YouTube for the sake of this CD. It reveals that Isadora’s arrangement is fabulous: she turns what was already powered at 500 volts into 50,000 volts, Byrne/Eno into Pantera, and the anonymous New York ranter into Cruella de Vil. Great piece! Who needs metal rock when you’ve got this?

In compiling discographies of various Dutch or other labels (HatHut), I often crossed the Maarten Altena Ensemble, and had always thought it was a modern Jazz ensemble. Obviously, not only. As Altena himself, trained as a contrabassist and active as much into Jazz as into contemporary-classical, it is comprised of highly versatile musicians. Soprano Jannie Pranger is impressive: not just versatile and hugely theatrical, but when she’s asked to sing lyrically, beautiful soprano voice. More about her on her website. Great disc, TT 66 minutes.