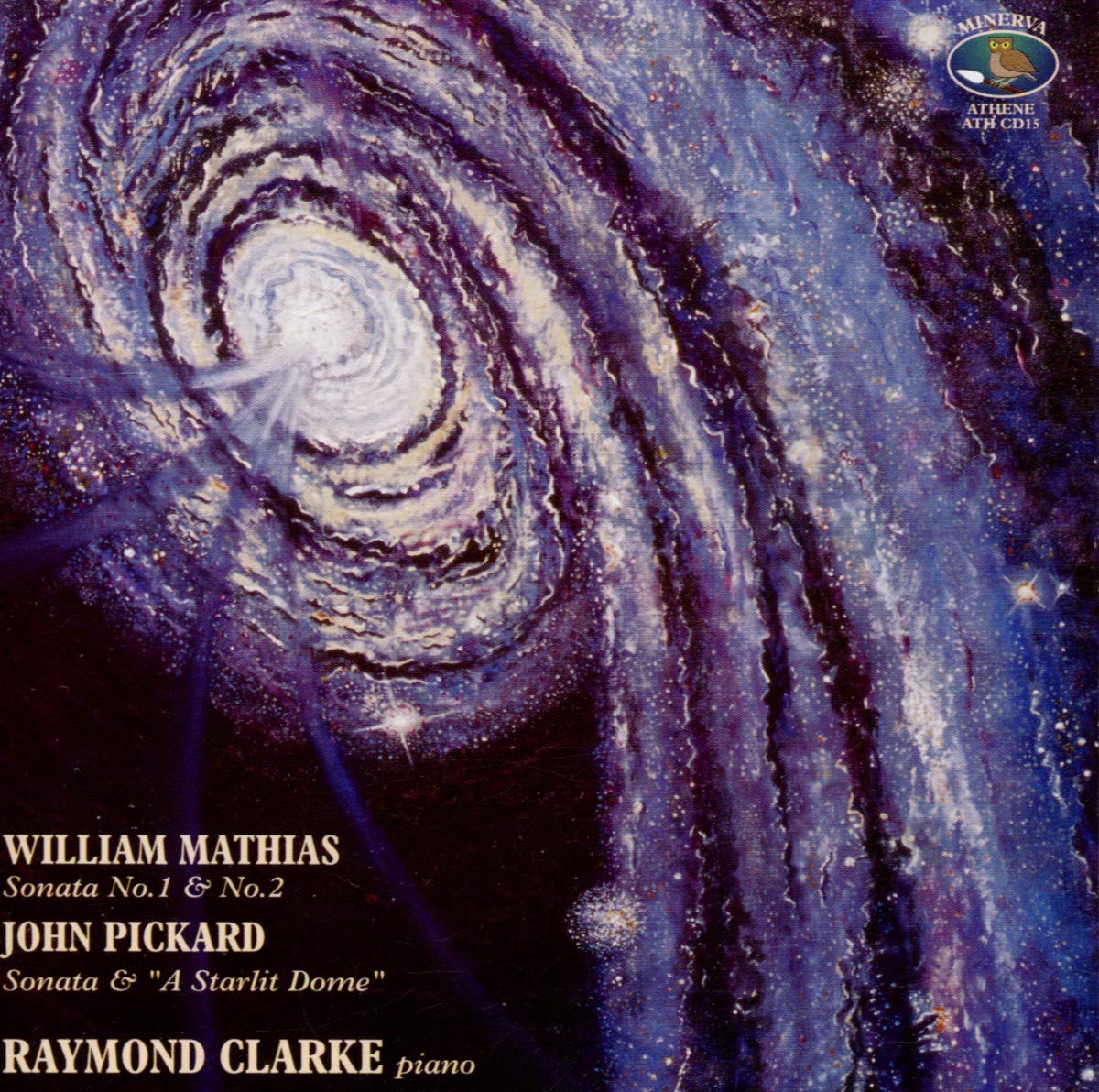 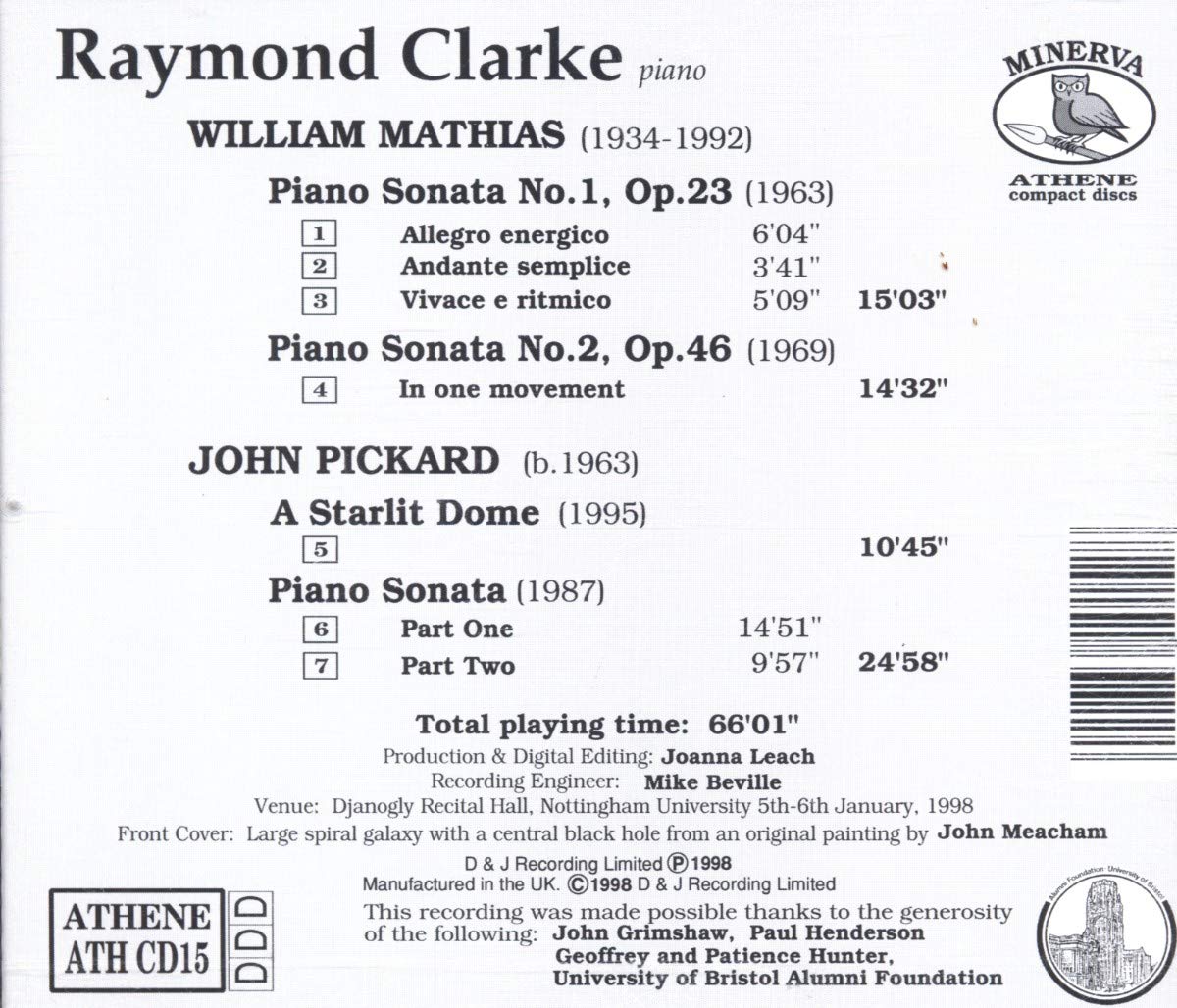 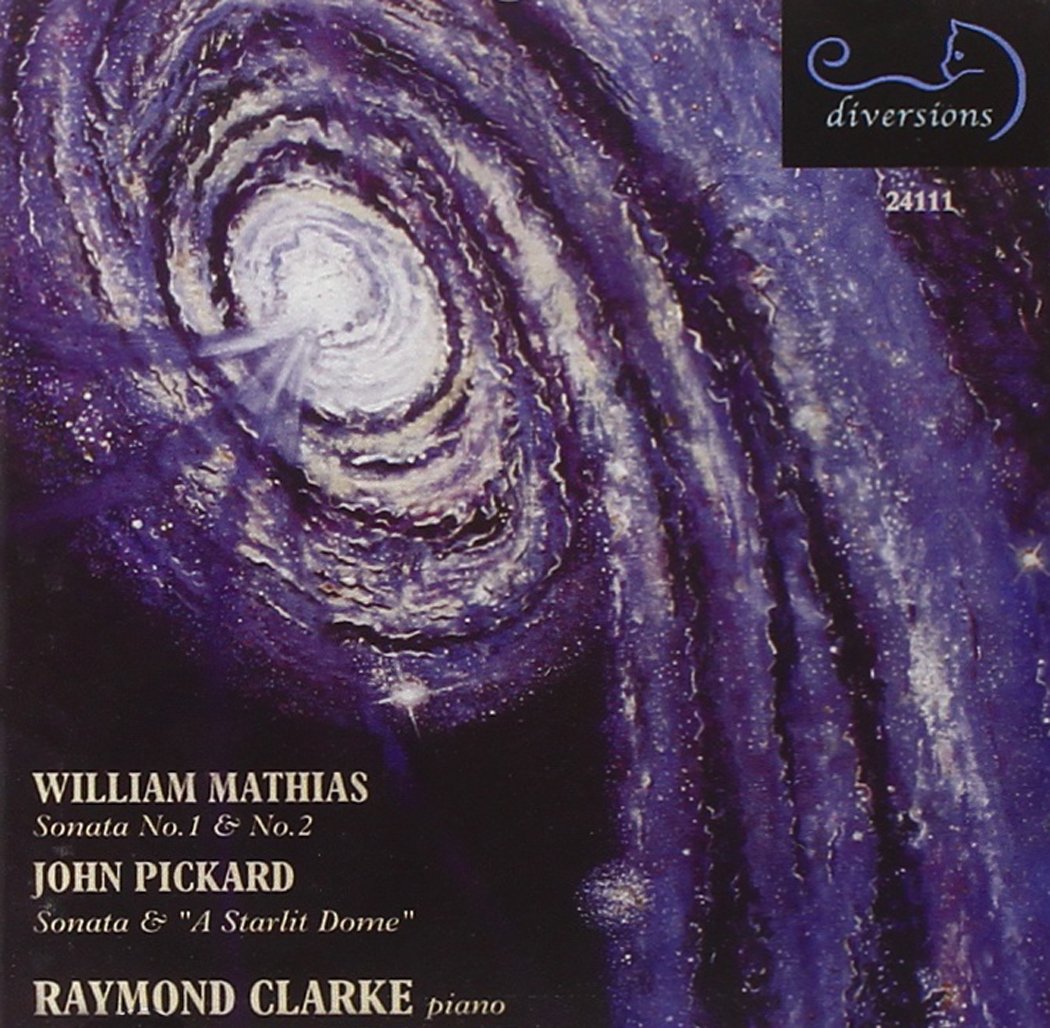 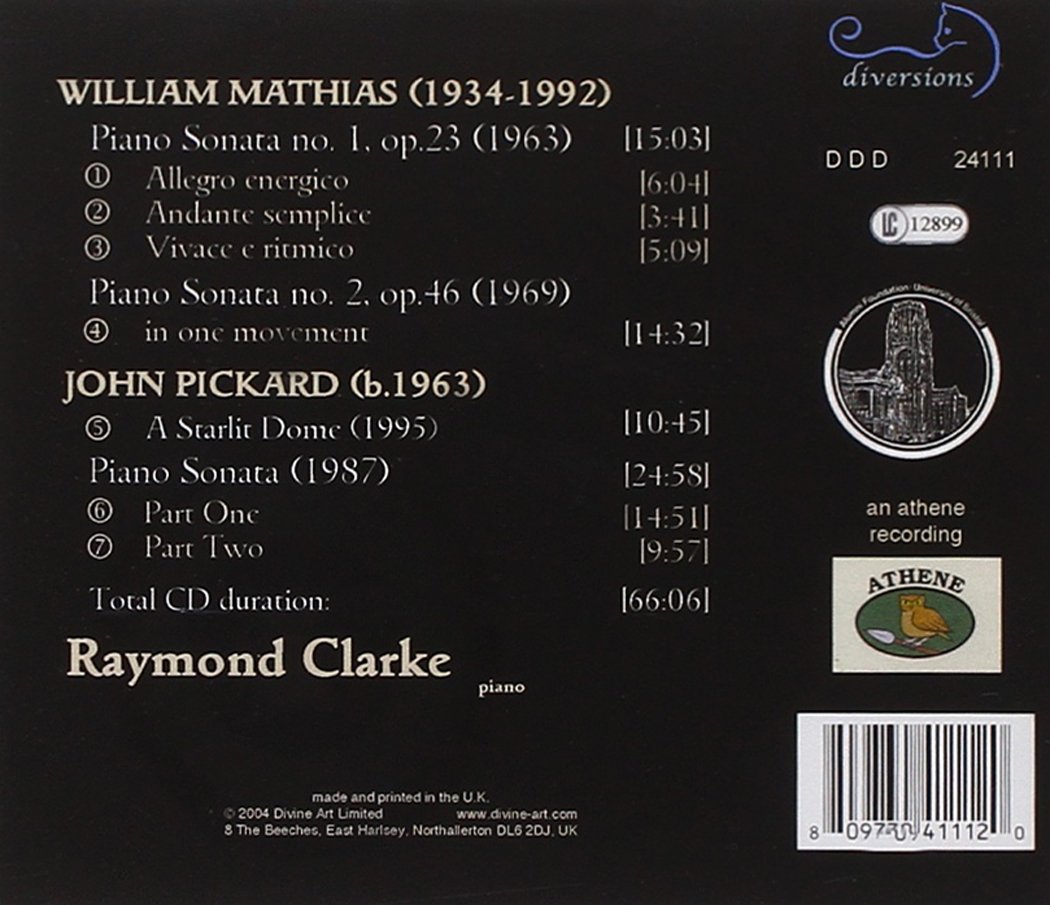 William Mathias is better known (at least to me) as a symphonist, and as the liner notes, written by composer John Pickard, point out, although “himself a fine pianist and although much of his large output features the piano as an ensemble instrument, he actually wrote surprisingly few solo piano works”. The First Sonata, couched in the traditional fast-slow-fast three movements (but with the slow movement seguing without a break into the Finale) was written in 1961, and the Second, in one movement, six years later.

They are hugely impressive works (and I’ve liked them so much that I immediately bought the scores). The first movement of Sonata No. 1 is motoric, pounding, kaleidoscopic in its use of machine-gun-like repeated notes, with more dreamy and resonance-filled passages, the whole sounding like a contemporary and even more powerful and aggressive version of Prokofiev’s 7th Sonata, and evoking as well, but in more violent, the fast movements of Dutilleux’ Sonata. Likewise the Toccata-like Finale, with its boucy syncopations and its pitting chords in long note-values in the low registers against dazzling filigree in the uppermost range, brought to mind Copland’s magnificent Sonata, which pianist (and music critic) Raymond Clarke has also recorded (on

The Divine Art 25016, barcode 809730501623, published in 2003). While not avant-garde, the sonata is also far from conservative harmonically, and Mathias has a knack for exploring harmonic clashes that sound hugely dramatic. In the middle, a slow movement that, in its use of delicate melodies in the upper range filled with appoggiaturas, shares something of Bartok’s nocturnal atmospheres (those found in the “Out of Doors”-Suite or in the slow movement of the Second Piano Concerto), although, according to the liner notes, this reflects “the character of traditional Welsh penilllion singing”. Folk music of all countries, unite!

The second Sonata starts with the same kind of hushed, dreamy and mysterious atmosphere as in the slow movement of the First, that now strikingly if fugitively brought to mind Messiaen’s bird calls. All the elements of the first are still present, the muscular and dashing toccata-like, the dreamy and liquid filigree, but they are integrated in a more compact and united form in which they are directly pitted and contrasted against one another.

It is not easy to write music that will sound new and original at the piano, this king of instruments, explored by so many composers since the early 19th Century that you’d easily think it had, after Messiaen, exhausted its possibilities and ability to surprise. Of course it hasn’t, composers like Stockhausen or Xenakis, following the lead of Ives and Cowell, devised ways of playing – or should I say pounding, or attacking? – the keyboard, using fists, palms, elbows or various devices, that have pushed the instrument even further. Composers like Cowell again or Crumb have by-passed the difficulty by inventing new ways to play the piano, not just from the keyboard, but, in various ways, directly on its strings or, like Cage, by altering its tone through various manipulations. Mathias is entirely “traditional” in his use of the keyboard, and yet I find that he has succeeded in inventing something original, in his very poetic use of the high-register filigree, and because his Sonatas seem to push the virtuosity of Bartok, Prokofiev and Messiaen to its utter limits.

John Pickard is a British composer born in 1963 and a student of Mathias. I don’t know if it is related, but his piano music sounds a lot like Mathias’. A Starlit Dome, a tone-poem for piano from 1995, taking its cue from a line from Yeats’ poem Byzantium, is Pickard’s version of a Nocturne – but, in his words, “an astronomical nocturne”, one inspired by Pickard’s observations as an amateur astronomer of the Great Nebula in Orion. It starts with the same kind of hushed, liquid and dreamy atmospheres found in Mathias, and gradually rises to a Toccata-like rush of muscular and pounding energy.

The same kind of angry pounding informs Pickard’s earlier Sonata, but here it rises to an unleashed state of rage and fury. Pickard writes about the political content of his Sonata, written in 1987 by a 23-year old composer as a cry of protest against Margaret Thatcher and “everything she and her government represented”. The Sonata is couched in two movements, formally original, the first made up of two themes with four variations each, and the second of three invigoratingly brutal toccatas. It opens with stark and forbidding chords (the Copland of the Piano Variations now comes to mind), very percussive, imitating the angry drums of a funeral march. The music is not uniformly angry, violent and pounding and it has its moments of repose and dreaminess (the variation that develops at 8:06 in the first movement reminds me of Ravel’s left-hand concerto, with its brooding and blurred scales in the lowest register underpinning a “right-hand” melody of almost oriental contour), but when it rises to its climaxes of pounding it has little equivalents in the 20th-Century piano literature that I can invoke. Xenakis’ Herma, Alain Louvier’s Etudes for Agressors, maybe? But Pickard is much more melodious than that, even in his pounding climaxes. This is my first encounter with the music of Pickard, and it makes me want to explore more.

I hope that knowing that this impressive and furious work was occasioned by and directed against Margaret Thatcher won’t deter admirers of the “Iron Lady” from listening to it, or they’d be missing something – although it is probably a very bold assumption to think that admirers of Thatcher would have any reason to explore this entry and read this review: somehow, some things seem to go together (or am I being unfairly clichéd here?). But it is something that even Thatcher admirers can recognize, that the magnitude of the fiend is both a factor of and magnified by the greatness of the reactions it produces. Franco produced Picasso’s Guernica, Hitler produced Stravinsky’s Symphony in Three Movements and Bartok’s Music for Strings Percussion and Celesta and some now say that it is as much Stalin as Hitler that produced Shostakovich’s Leningrad Symphony, anti-semitism produced the same’s Babi-Yar Symphony, Hiroshima produced Penderecki’s Threnody. So it is, in a way, a tribute to Thatcher’s stature that resentment against her produced works of such power as Pickard’s Sonata. Resentment against Bush II produced no more than a shoe in the face. 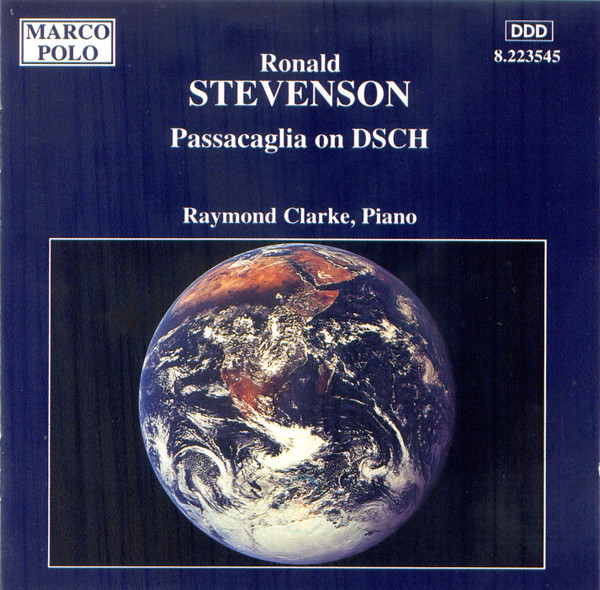 Needless to say, such impressive music calls for a pianist with impressive skills. Raymond Clarke, born in Bournemouth also in 1963 and aged 35 when the recording was made, whom I knew from his recording of Ronald Stevenson‘s mammoth Passacaglia on DSCH on Marco Polo 8.223545, barcode 730099354523  and of Robert Simpson‘s piano music on Hyperion CDA66827 barcode 034571168272,

sounds entirely and impressively on top of it. Pickard’s Piano Sonata was composed for him and dedicated to him, and mentions in Pickard’s liner notes show that he benefited from the advice of Mathias when working on the 2nd Sonata in 1991 (and Mathias obviously left his interpreters very free to do it their own way). “A Starlit Dome” has benefited from another recording, on the Welsh label Sain, by its premiere performer Iwan Llewelyn-Jones, on an intersting CD of piano music by contemporary Welsh composers. Llewelyn-Jones is more meditative, implacable and massive than Clarke, but Clarke is more animated, and ultimately the latter’s better recording and more focused piano brings more power to the music. TT 66 minutes, excellent liner notes. Again, impressive piano music and impressive piano playing.