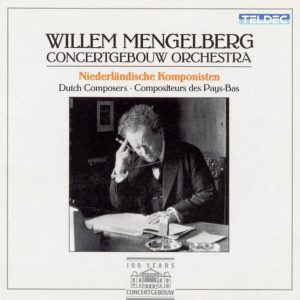 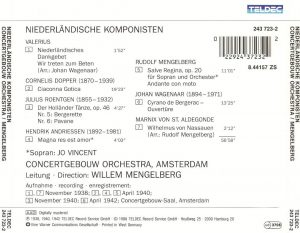 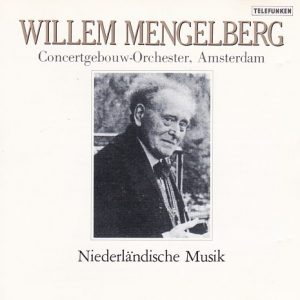 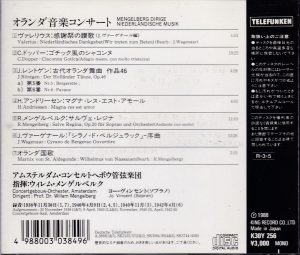 Teldec could have been more helpful by providing the exact sources of these recordings – King Record does, although, in truth, I hadn’t noticed the fine print at the bottom of their back cover until after I had done my own detective work.  These are all studio recordings, all originally published on Telefunken 78 rpms. Dating found on CDs or online is sometimes contradictory, but the best source I’ve found for elucidating these matters is a great online Mengelberg discography (link will open a .pdf document in a new tab).

Valerius/Wagenaar “Niederlängisches Dankgebet” (track 1) and what is credited (but about this see further) as Marnix von St. Aldegonde’s “Wilhelmus von Nassauen” in an arrangement said to be by Rudolf Mengelberg (track 7), were recorded on December 1, 1938 (but the CD and other Mengelberg discographic sources say 30 November) and originally published on Telefunken A 2899 (10”) or NK 1965 (12”).

It took me some research to establish for sure what exactly were the so-called Valerius “Niederländisches Dankgebet” and its arrangement by Johan Wagenaar. Wikipedia gives an answer to the first question, as well as the piece’s original title in Dutch: “Wilt heden nu treten” (We Gather Together): a Christian hymn written by Adrian Valerius in 1597 to celebrate a Dutch victory against Spain, found in his collection of folk poems and melodies “Nederlandtsche gedenck-clanck”. Wikipedia adds that “the German translation of his most familiar song Wilt Heden Nu Treden (known in English as We Gather Together): Wir treten zum Beten or Altniederländisches Dankgebet (Old Dutch Thanksgiving Prayer), became a potent symbol of the ‘Throne and Altar’ alliance of German civil religion until 1918. In the United States, it is popularly associated with Thanksgiving Day and is often sung at family meals and at religious services on that day, having been brought to America by Dutch settlers in New Amsterdam, now New York City”. The Concertgebouw archive shows that the piece had been performed a number of times by the orchestra under various conductors since 1898 (already Mengelberg then), but it must not have been in Wagenaar’s arrangement, since records show a Waagenar arrangement for small orchestra dating from November 1938, see this .pdf document, p. 16/33 (will open in a new tab). Which seems to imply that he made it specifically for the recording, which took place the month after.The piece was apparently dropped from the orchestra’s concert repertoire after 1934, and the last time it was performed was on 10 December 1949, and it was Eduard van Beinum conducting then.