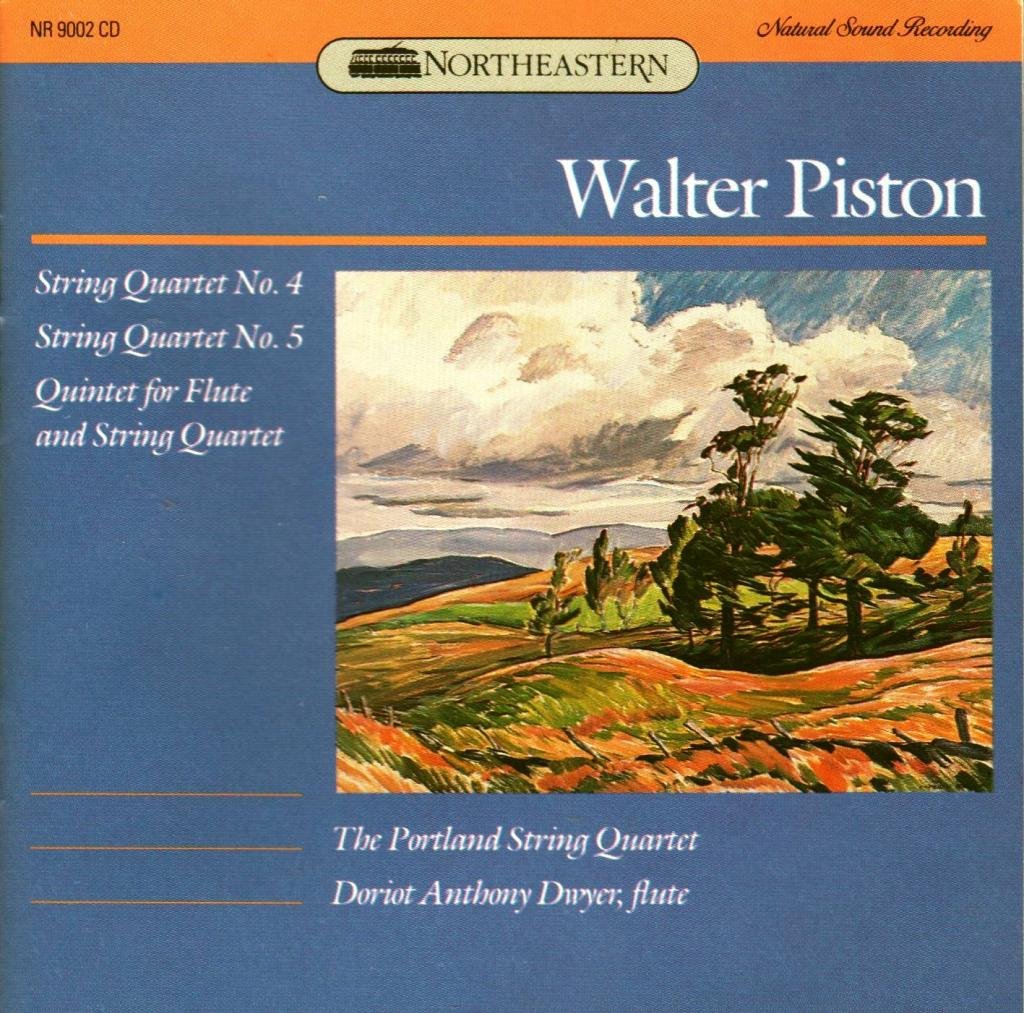 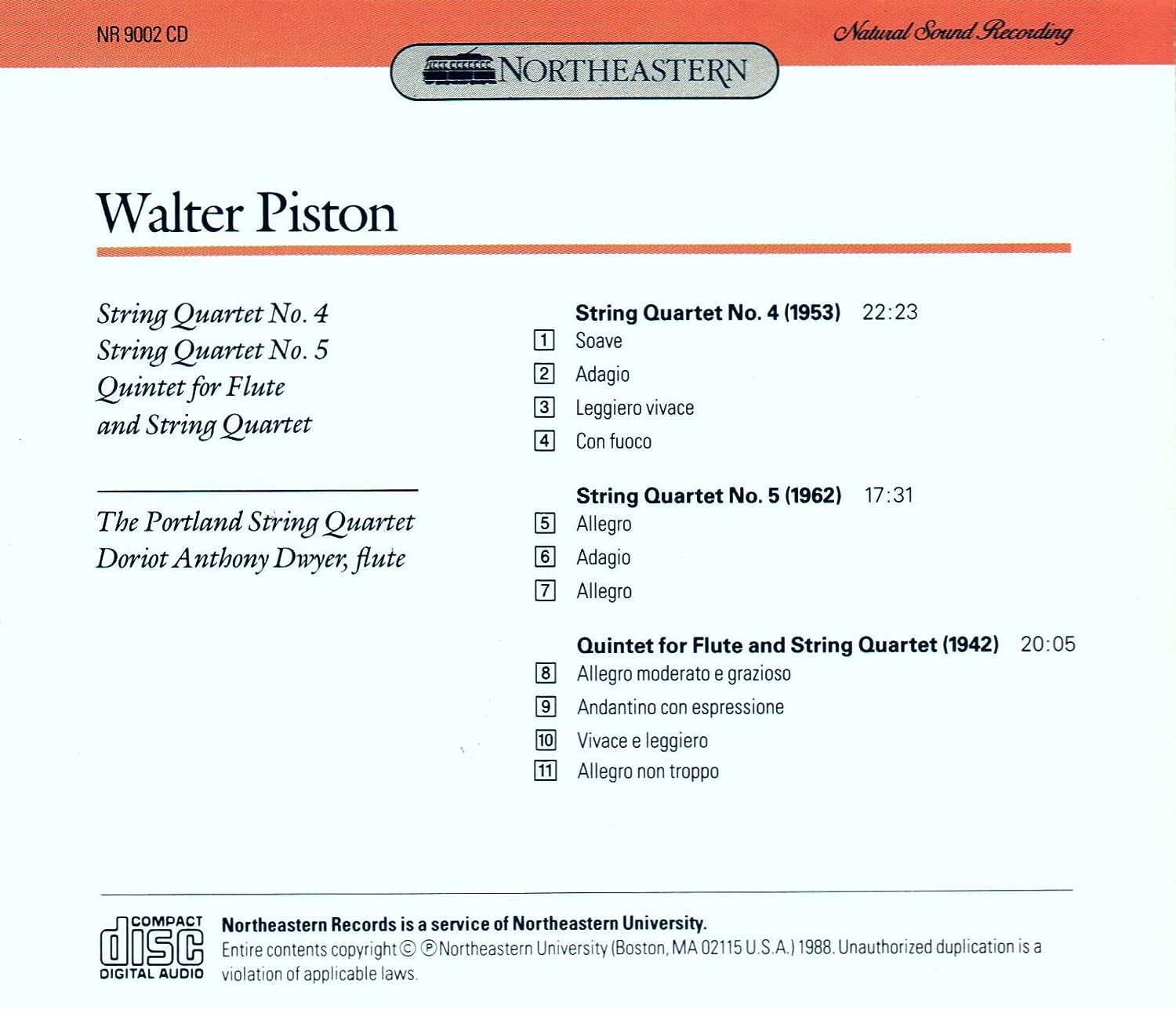 Quartet No. 4 recorded at the Houghton Memorial Chapel, Wellesley College, November 1982
Quartet No. 5 and Flute Quintet recorded at Sanders Theatre, Harvard University, date not provided (circa 1982)

Piston from pastoral to atonal
Originally posted on Amazon.com,  16 January 2009

In the early to mid-1980s Northwestern University did great service to American music by recording the complete String Quartets of Walter Piston, a central figure of American music in the 2nd half of the 20th Century, complemented with the Piano Quintet, the Flute Quintet, the Piano Sonata, Improvisation and Passacaglia for piano. The Quartets and Flute Quintet were first issued on LP (Nos. 1 & 2 on NR 216, 3 & 4 on NR 214, 5 and Flute Quintet on NR 208) then, in reshuffled couplings, on 2 CDs, to which Northeastern added one more, and this is one of those three instalments (the two others are NR 9001 CD with String Quartets Nos. 1-3 and NR 232 CD with the unpublished 1926 Piano Sonata, Improvisation, Passacaglia, Piano Quintet – links will open new tab to my review).

Written in 1942, the Flute Quintet is the earliest piece on the disc. Maybe due to the nature of the solo instrument, it is mostly lyrical and pastoral. The music of Ravel and Roussel comes to mind. There is a more rhythmically robust passage of neo-classical contour at 3:30 in the slow movement Andantino con espressione, and the scherzo is a short, whimsical, fleeting kind of moto perpetuo, and again Roussel comes to mind. I haven’t heard Piston’s ballet music “The Incredible Flutist” in a long time, but I fancy that this movement could be part of it. The finale abain has a Stravinskian robustness (the light-footed, neo-classical Stravinsky of Apollo Musagetes, that is). There is nothing groundbreaking in the music, it is even very traditionally molded, but it is enjoyable.

The 4th String Quartet from 1953 pursues the mood of gentle lyricism in its first movement, with what the liner notes, after scholar and conductor Nicolas Slonimsky, call “pandiatonic” melodic lines and harmonies, e.g. tonal with a chafing edge. But the following adagio is a sombre, brooding meditation of great emotional intensity.

Piston was a master of these superb,intense middle slow movements, as his first three Quartets amply show, and these are really the emotional core of his Quartets. The Scherzo is a whimsical jest much like the scherzo of the Flute Quintet (and short like it), but with an added bite to it. There is much raw energy in the finale.

Where one might have thought that Piston was moving perhaps in new directions, the 5th Quartet indicates rather that he was in fact reverting to the more angular style and rhythmic robustness of his first three works in the genre. Indeed, it is striking how much the first movement of Quartet No. 5 sounds like a sequel to the same in Quartet No. 1, and the slow movement to the same in Quartet No. 2, all the way to the basic time signature and pulse. The Quartet was written in 1962 for the Berlin Festival and premiered by the German Kroll Quartet, and it does sound more “German”.

Its rhtymic vigor, even dance-like fury in the finale, is even evocative of Bartok, while the stern, central adagio – again, as the previous four Quartets, the emotional heart of the work – moves in the direction of atonalism (the same in Quartet No. 2 was marked by a form of “dissonant counterpoint” reminiscent of Ruggles and Carl Seeger) and sounds as if it could have been composed by Krenek.

I have another version of the 5th Quartet played by the Kohon Quartet, on an excellent VoxBox 2-CD set, CDX 5090, “American String Quartets 1900-1950”. The Portland Quartet has more tonal lustre and more dynamism in the faster sections. If your interest is Piston solely, this is the set to get.