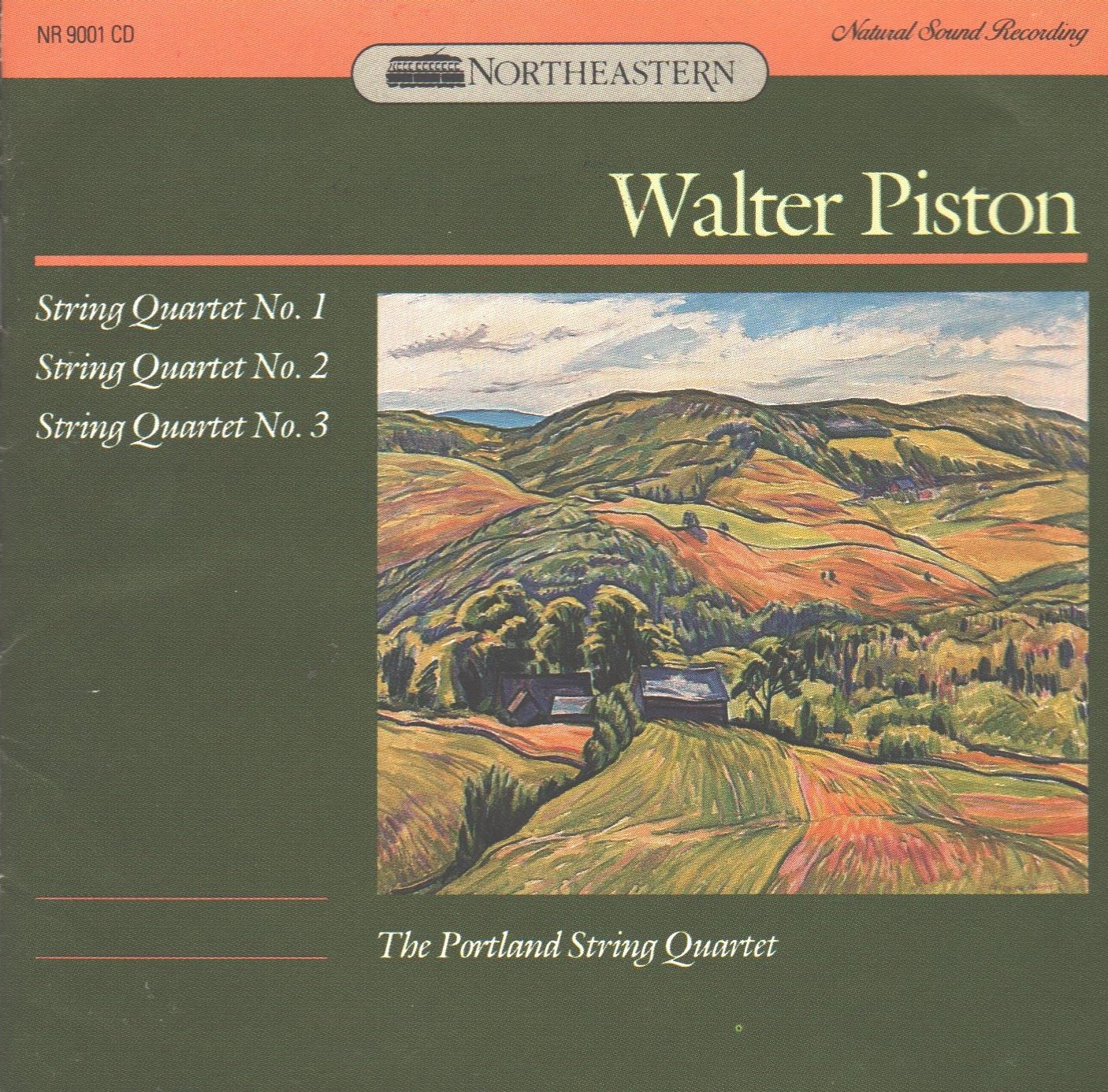 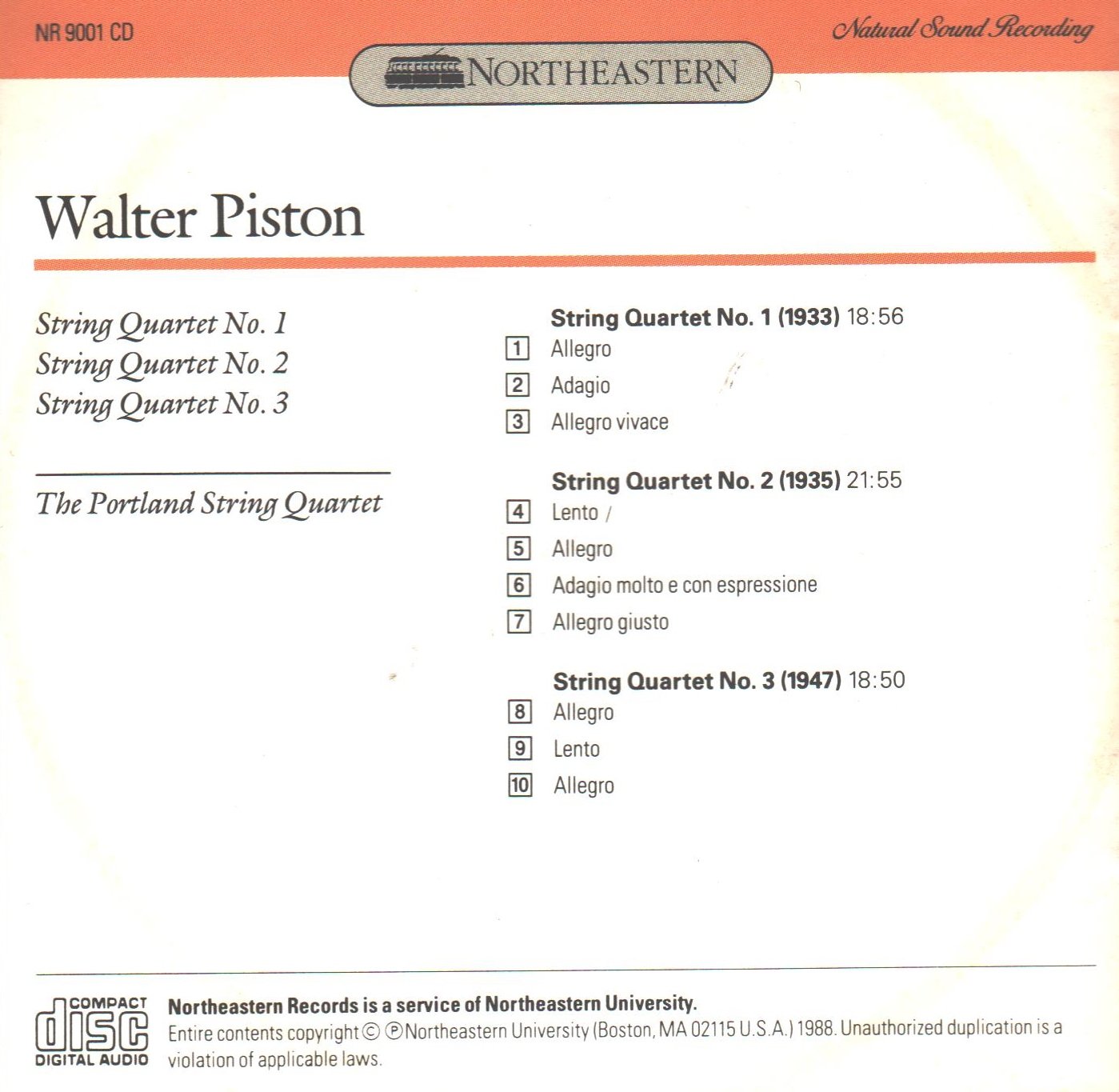 In the early to mid-1980s Northwestern University did great service to American music by recording the complete String Quartets of Walter Piston, a central figure of American music in the 2nd half of the 20th Century, complemented with the Piano Quintet, the Flute Quintet, the Piano Sonata, Improvisation and Passacaglia for piano. The Quartets and Flute Quintet were first issued on LP (Nos. 1 & 2 on NR 216, 3 & 4 on NR 214, 5 and Flute Quintet on NR 208) then, in reshuffled couplings, on 2 CDs, to which Northeastern added one more, and this is one of the three instalments. The two others are NR 9002 CD (with String Quartets Nos. 4 & 5 and Quintet for Flute and String Quartet) and NR 232-CD (Sonata for Piano, Improvisation, Passacaglia, Piano Quintet) – links will open new tab to my reviews.

Piston’s language is decidedly 20th Century and decidedly of his times. His first three quartets bring to mind Hindemith and Bartok, which, in the mid-1930s, was neither avant-garde nor backward-looking. They exude great rhythmic exuberance and bite in the fast, outer movements, and brooding emotional intensity in the slow movements. His style didn’t evolve much. While the 4th Quartet from 1953 has moments of surprisingly pastoral mood, the 5th, written in 1962, reverts to the Bartokian

angularity of his first three. In fact, it is striking how much the opening allegro sounds like a sequel to the same movement of Quartet No.1, and the middle adagio like an afterthought of the same in Quartet No. 2 (see my review of the companion disc).

The First String Quartet was composed in 1933 and its outer movements have a forward-moving and biting rhythmic vigor reminiscent of Hindemith (the liner notes point the the German emigre was a close personal friend of Piston). As such, it is pleasant but not entirely original, although the galloping rhythms in the compact finale are quite irresistible. But the slow-moving, alternately brooding and elegiac middle adagio, with an anguished fugal climax, is the emotional heart of the composition. Ravel (String Quartet) and Roussel (Serenade) passingly came to mind.

The Second Quartet was written two years later and opens with a slow introduction in the same somber, brooding mood as the 1st Quartet’s adagio, rising to an intense climax interrupted by the same kind of vigorous and biting allegro, but here written in even more gnarled and angular melodic phrases, with a fury reminiscent now of Bartok. Follows a stern and brooding adagio,with an elaborate “dissonant counterpoint” reminiscent of Ruggles and Charles Seeger. In its liveliness and almost folk-like melodic contour (but slightly dissonant) the finale is the most “American”-sounding, I find.

Jump twelve years to 1947 and here comes the Third Quartet. Rhythmic vigor again in the outer movements, even squareness in the first, and a dance-like boisterousness in the finale, but crossed by a more gentle and lyrical mood which was already in evidence in the

Flute Quintet from 1942. Again the middle Lento reaches heights of emotional intensity – these central adagios are really the core of Piston’s message.

I hear nothing entirely original in Piston’s Quartet and nothing as uniquely personal as in the Quartets of William Schuman for instance (see my review of his String Quartets No. 2, No. 3, No. 5 performed by the Lydian Quartet on Harmonia Mundi HMU 907114), but they are well-crafted and very enjoyable nonetheless, and the middle movements of the First and Third String Quartets are even better than that.

There is not much competition for this music. There is another recording of the First Quartet, published in 1991, by the Chester String Quartet on Koch International Classics 3-7069-2 H1 (paired with Quincy Porter’s String Quartet No. 3 and Barber’s String Quartet op. 11), barcode 099923706922, which I don’t have. I do have an alternative version of the 5th, by the more than serviceable Kohon Quartet on a VoxBox 2-CD set, CDX 5090 (link to my review), devoted to “American String Quartets 1900-1950” (although three on that set, including Piston’s, were composed later than 1950), and here the Portlands are better: more dynamic and with more tonal lustre. So let’s assume these same qualities are at play and all the other quartets.