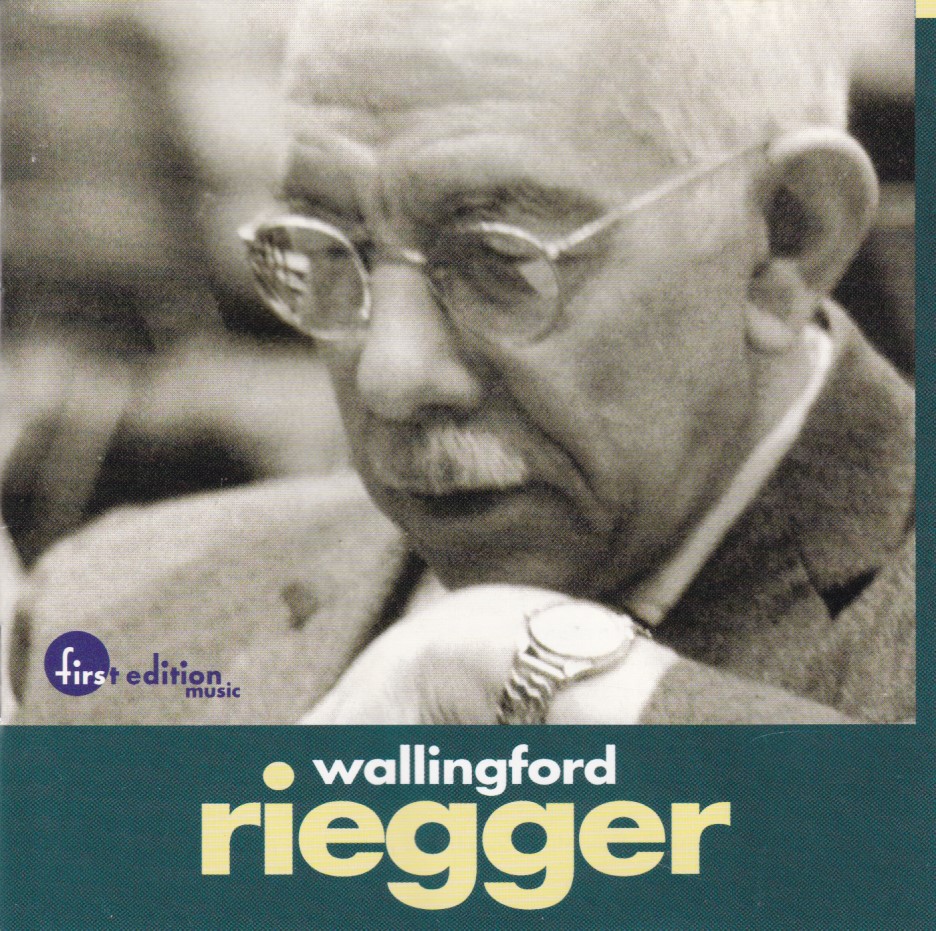 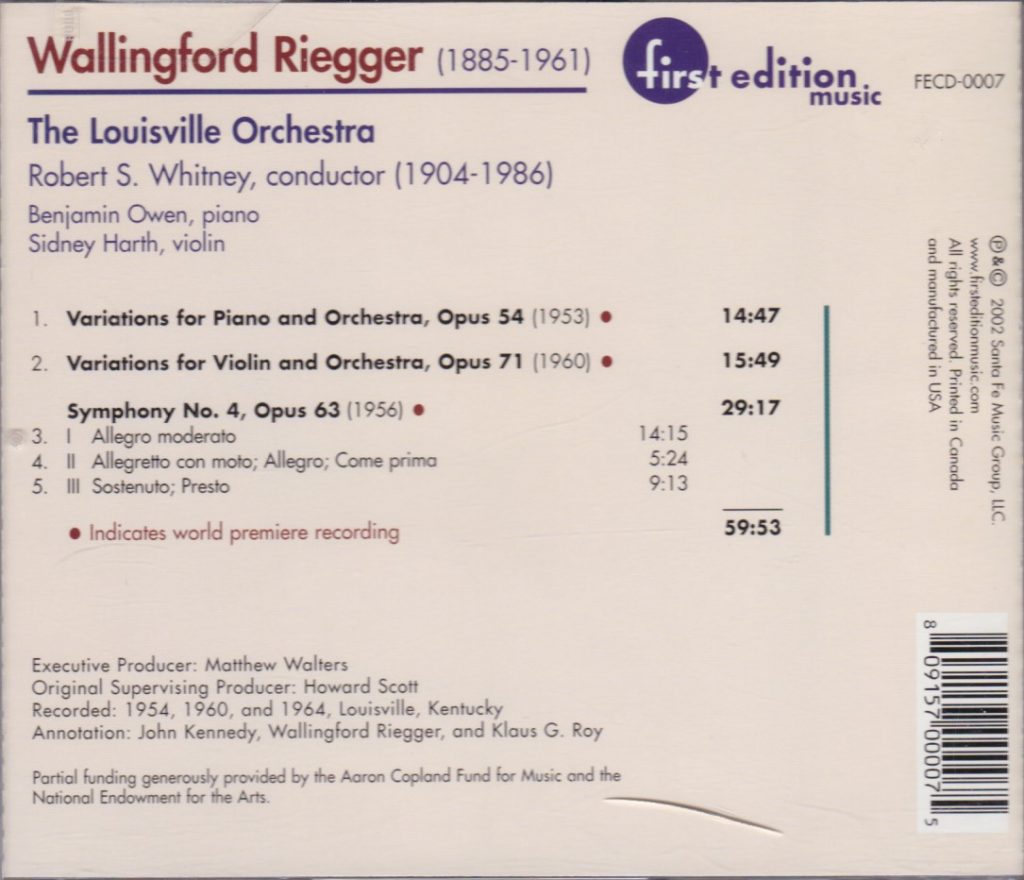 “The vocabularies of Schoenberg and Bartòk meeting Copland and Harris”
Originally posted on Amazon.com, 17 October 2007

I had enormously enjoyed the cross-section of Riegger’s music presented on CRI CD 572 (1990), whose main pieces were the Third Symphony, Music for Orchestra, Concerto for Piano and Woodwind Quintet and Music for Brass Choir, and naturally wanted to investigate more. Wallingford Riegger (1885-1961), one of the lesser known members of the group that in the thirties came to be known as “The American Five” and that included Ives, Cowell, Ruggles and the even more neglected John J. Becker (see The Louisville Orchestra-First Edition Encores and John J. Becker: Soundpieces 1 & 5 / At Dieppe / Concerto Arabesque), was among other things the introducer in the United States of Schoenberg’s twelve-tone system. But he was also an ecclectic, and Riegger himself classified his own music in four categories: “non-dissonant (mostly)”, “impressionist”, “partly dissonant” and “dissonant”.

This First Edition CD collates three Louisville recording premieres, of the Variations for Piano and Orchestra op. 54 from 1953,

the similar Variations for Violin and Orchestra op. 71 from 1959 – two Louisville commissions, recorded shortly after their respective premiere, in mono sound – and the 4th Symphony op. 63 from 1956, recorded in stereo in 1964 (incidentally the disc’s titles date the Violin Variations from 1960, contradicting the production information given in the liner notes. Maybe it is the year of publication). 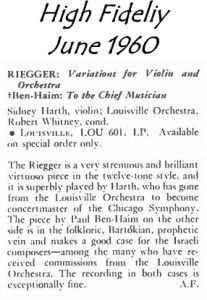 Anyway, based on the relatively superficial impressions borne from listening without the scores, I initially found this disc highly interesting more than highly enjoyable, as it presents Riegger at his most Schoenbergian. Indeed, both sets of Variations, written in fairly strict serial technique, sound strikingly like Schoenberg’s Variations opus 31. Within that style, uniquely Riegger’s own mark I feel are the sardonic humor which most strikingly comes to the fore in the jazzy brass interjections of the Piano variation # 9 at 6:28 and in the final fugue at 11:52 (in which I hear a take off of “When Johnny comes marchin’ home”), and the witty, perky and often sparse, even threadbare chamber-music like orchestration of the Violin Variations: the orchestral tutti is hardly ever heard, even the string tutti. The first variation (0:38) is violin over a line of solo cello, second variation (1:13) has an accompaniment of bassoon, oboe and flute, it is flutes, contrabassoon and tuba in variation 5, and harp chordal interjections in the next one at 5:37. The Violin Variations also end with a fully-fledged violin cadenza, concerto-like.

In these Schoenbergian similitudes lie I feel the compositions’ interest but also perhaps their limitation. Besides Sessions, Carter and Rochberg, how many composers were there in the United States in the fifties who composed according to Schoenberg’s method and idiom? So, now that the stylistic disputes and controversies of the times are a historical footnote, any of these American Schoenberg-inspired works would have at least the value of rarity and originality. On the other hand, not only will the music always sound somewhat derivative, but it is also, as the compositions of its inspirer, stern and demanding. It is certainly dramatic and I will not say that it lacks lyricism – on the contrary, the Violin Variations in particular are very lyrical, but it is a Schoenbergian, atonal lyricism, not immediately seductive – those who know Schoenberg’s Violin Concerto will know what I mean. Appreciation of it is an aquired taste more than an instinctive one, I would say. That said, Riegger displays great imagination in the way he varies his themes. A few years after posting this review, I bought the score of the Violin Variations, and looking at the details of how it is done has enhanced my interest to genuine enjoyment, and even admiration. Sidney Harth plays with awesome authority and beauty of tone. It is something I’ve remarked also from his recording of Edmund Rubbra’s Improvisation for Violin and Orchestra, also with the Louisville Orchestra (British Modern 1): I suspect that Harth is one of the most shamefully unrecognized major violinists of the 2nd half of the 20th Century (he subsequently became the concertmaster of the Chicago Symphony Orchestra). No kidding: in beauty and fullness of tone, this is to my ears in the league of Oistrakh and Stern.

The 4th Symphony is more ecclectic and unpredictable. It starts in a pastoral mood, sounding strikingly like it could have been written alternately by Nielsen or Janacek, with touches of Copland, but soon evolves in more angular gestures, full of canonic developments that recall the late neo-classical Stravinsky of Agon and Symphony in Three Movements or, at times, Schoenberg again, and it veers back and forth in an apparently episodic manner. The second movement, a scherzo in A-B-A form, is based upon material drawn from a dance composed in 1936 for Martha Graham on the Spanish Civil War, hence the Spanish color of its middle section, with the A part based on a quasi-passacaglia syncopated rhythm first played by the basses pizzicato. This reminded me of the music composed by George Antheil in his later days, such as for his ballet “Capital of the World” (Capital of the World / Sym #5 / Archipelago), but Riegger is here far more imaginative and original, with none of the Hollywood triteness that marks and mars Antheil’s composition. The finale returns to the mood of the Variations, with a broad and stern melody of forbidding grandeur, canonically treated, later alternating between subtle woodwind filigree and grandiose brassy perorations, with also a perky march theme at 5:40 and again at 8:05, all derived from the opening melody. The late, turned-serial Stravinsky is the closest similitude I can come up with, but Riegger is very much his own, and one of the symphony’s most engaging features is its rhythmic and syncopated vitality, and the potency of its brassy outburts. In fact, Riegger could have called it a Concerto for Orchestra. Again, this may not be immediately seductive music, but it is rich and rewarding on careful listening. The study score is published by Hal Leonard and sells for 25 $, which is really cheap for an orchestral score of 20th century music. I like Riegger’s music enough that I bought it (barcode is 073999504248). The 1964 stereo recording lets you hear with total clarity every instrumental detail, and the Louisville orchestra proves again what a great orchestra they had become under Whitney’s stewardship, playing with precision, bite and commitment. But the remastering for CD has made an indiscriminate and excessive use of filtering, resulting in an instrumental tone, especially of the strings and in the softer dynamics, that at times sounds disagreeably metallic and frazzled, as in a badly worn tape or as music playing under water (I had remarked the same with First Edition’s reissue of Mennin’s Cello Concerto on Peter Mennin: Syms 5 & 6 / Cello Cto). Other than that the stereo recording has a welcome presence and bloom.

The problem also affects the mono Variations, and there the original sonics were already somewhat distant and lacking spatial bloom, with a hollow perspective in the Piano Variations and more depth in the Violin Variations. But, in the latter, whether from the original sound pickup or the remastering, heard on headphones there is a disagreable feeling of congestion in the first six variations that seems to point to fake stereo, and a strange change of sonic perspective after variation 7, the violin shifting left, or perhaps from (fake?) stereo to mono. The otherwise highly informative production notes (as usual with this label) are silent on this. Another not so welcome custom of the label is that the individual variations are not cued (the same happens in Variations and in Crumb: Variazioni, Echoes of Time and the River). The notes are the original ones from the LPs, by Riegger himself for the Variations and Klaus G. Roy for the Symphony, to which a general presentation and a few specific comments on the three compositions by John Kennedy have been added for the CD reissue. Kennedy makes a conclusive comment that I find extremely perceptive, and right: “Of the `American Five’, Riegger alone had European training, which became manifest in his compositional sensibilities and technique. His music incorporates the free use of serialism and twelve-tone technique in a highly chromatic language of great lyricism. His treatment of motivic development was assisted by masterful and playful counterpoint, and the frequent use of passacaglia, fugue, and canon with great dramatic and emotional effect. He indeed created a new, ultramodern, American music, in which the dictates of serialsim were freely modified with tremendous expressivity and imagination. In Riegger, we hear the vocabularies of Schoenberg and Bartòk meeting Copland and Harris. It is a spectacular intersection that Wallingford Riegger was uniquely equipped to give voice to“.

Since the individual variations aren’t cued, here are the timings. I don’t guarantee those I provide for the Piano Variations – I’m playing by ear, as I don’t have the score. Those for the Violin Variations are exact.

Since listening to this disc and first writing this review, I’ve acquired a number of Riegger scores and explored more of his music, and I am even more convinced of his stature. His early Study in Sonority op. 7, from 1927, isn’t twelve-tone but certainly classifies in his “dissonant” works. Scored for 10 violins or multiple thereof, it is one of the most extraordinary modernist compositions of that decade, worthy of standing alongside anything written by Ives or Varèse. That no recording of it should be available on CD or in any digital form, in an era when the most remote and dusty corners of all repertoires are represented on CD, is disheartening. New Dance op. 18 is a boisterous and syncopated concert overture in Coplandesque style, very exciting, and it too enjoyed a modicum of popularity in the LP era, including a Mercury recording by Howard Hanson in 1953, not CD reissued – the only available recording on CD is a 1958 broadcast recording by Stokowski published by Cala, R. Vaughan Williams: Symphony No.9 in e minor / Alan Hovhaness: Symphony No.2 ”Mysterious Mountain” / Riegger / Creston. No CD of his two String Quartets either – No. 2 op. 43 at least enjoyed two recordings in the LP era (both on Columbia) and the first only one, on 78s, by anonymous artists on the obscure Yaddo label. No kidding! Naxos, Delos, are you asleep? Riegger’s neglect is one of the greatest injustices of the contemporary American music scene.

The CRI disc is probably a better introduction to the music of Riegger, as it presents both a greater variety of styles and some compositions of great value. But this CD makes a fine complement. More centered on the Schoenbergian side of Riegger (but the music, especially in the 4th Symphony, is more than just that), it completes the picture of one of the most original and undervalued 20th-Century American composers.