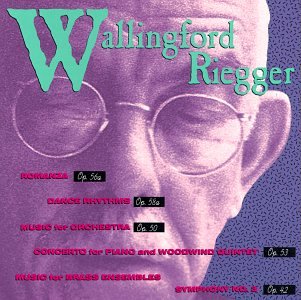 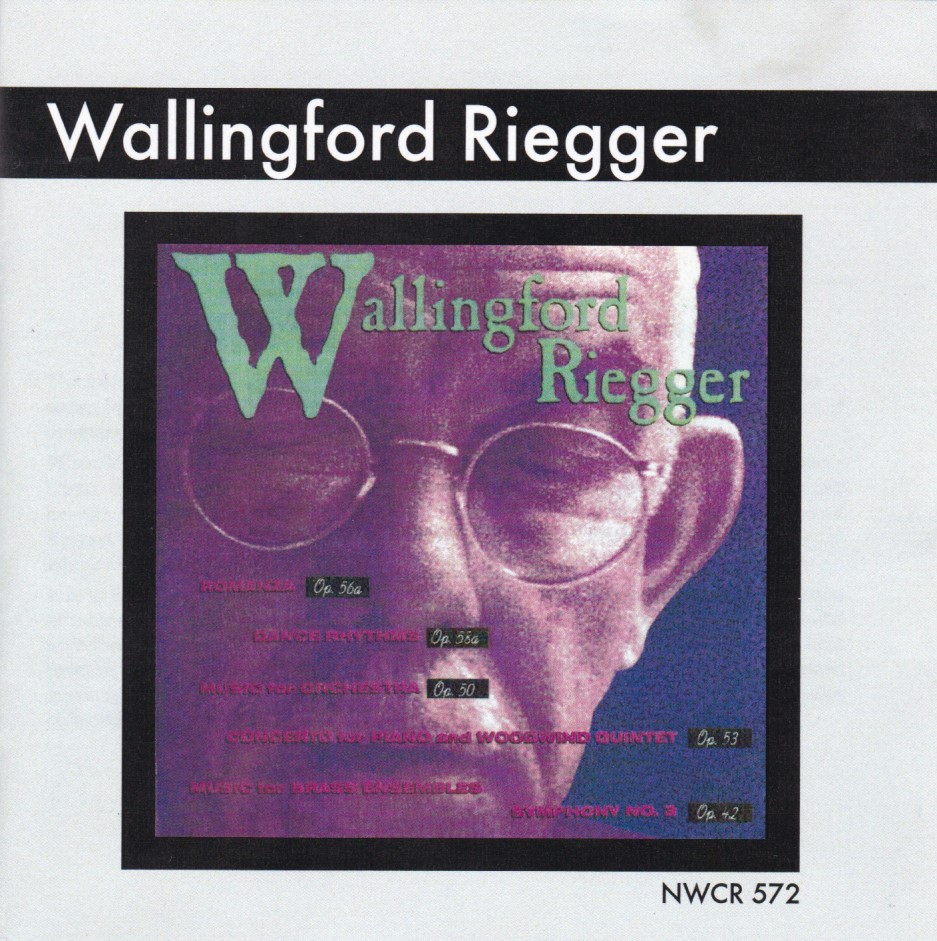 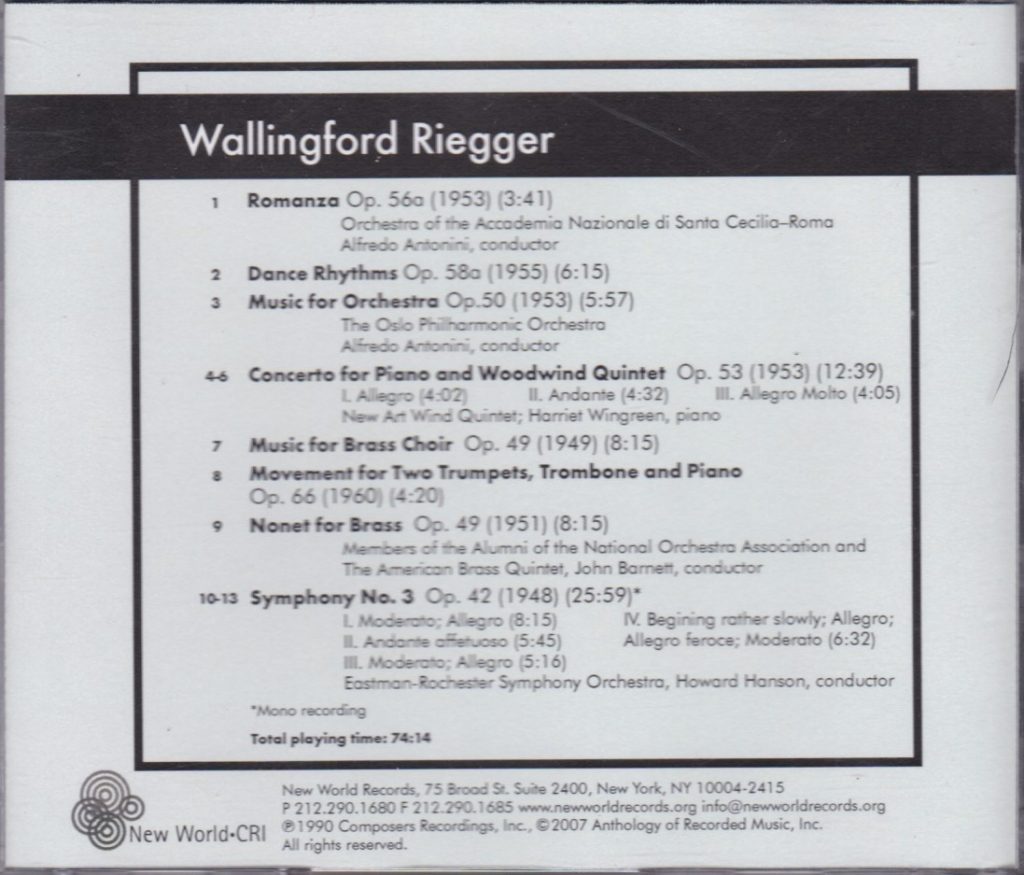 An undervalued by major American modernist
Originally posted on Amazon.com, 21 May 2007

The music of Wallingford Riegger (1885-1961) is difficult to pigeonhole. On the basis of his Barberesque (as in Samuel Barber, not as in “Barbaresque“, link to Wiktionary) “Romanza” Op. 56a from 1953 and Coplandesque “Dance Rhythms” Op. 58a from 1955, one might mistake him for one of those trite and derivative composers of sub-Copland (or even sub-Thomson) “Americana”. Both are “Gebrauchsmusik” (music written for a specific purpose) that have no reason to outlive their occasion (the first was written for a school orchestra and was meant to be not too difficult, the second for a dance company), quickly heard, quickly forgotten.

But then comes the contemporary (1953) “Music for Orchestra” Op. 50, and one is reminded that in the 1920s Riegger was a member of the so-called “American Five”, along with Ives, Cowell, Ruggles and the all-but forgotten figure, John Becker, and later an introductor of the Schoenbergian twelve-tone system in the United States. “Music for Orchestra” is quasi-serialist yet colorful and whimsical but also dramatic piece, as advanced as anything Sessions wrote in those years (some time after writing this review I found the score to Music for Orchestra, and Alfredo Antonini and the Oslo Philharmonic play with acceptable precision, making the distant mono sonics all the more regrettable here). The Third Symphony Op. 42 from 1948 is equally advanced for its days in its musical language, dodecaphonic, fugal, and again hugely dramatic, often of Bergian intensity – Schoenberg’s 5 Pieces Op. 16 also come to mind, but there is more of the “American Epic” and more robust and syncopated rhythms in Riegger’s composition, Bernstein’s Jets and Sharks without the Broadway sheen. I wouldn’t hesitate to call it one of the greatest American symphonies written in the 1940s, and I don’t know many that approach its power and anger (Barber’s Second Symphony, maybe?) – but I am not surprised that it didn’t really establish the standing of Riegger, so advanced and non-immediately seductive is its language. Again I’ve found the score some time after writing this review, and Howard Hanson and the Eastman-Rochester School play it with lots of adrenalin and acceptable precision, making the old and not always clear mono sonics all the more regrettable here (I’ve spotted a few bloopers though, that seem to result more from editing than performing erros, including the downright absence of the three final bars of orchestral surge, which come after a bar of silence, here definitive). This composition is way too great to justify its neglect. Leonard Slatkin, Naxos, anyone, hello?

According to the liner notes, Riegger himself classified his own music in four categories: “non-dissonant (mostly)”, “impressionist”, “partly dissonant” and “dissonant”. 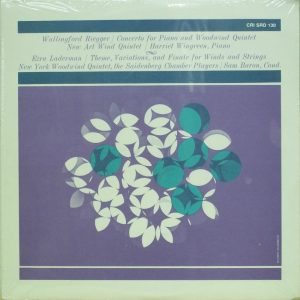 The Concerto for Piano and Woodwind Quintet Op. 53 (from 1953 as the “Music for Orchestra”) is a small masterpiece, a wonderfully witty composition in its somewhat stern manner (but the finale has a great sense of humor), a mixture of atonalism and neo-classicism, somewhere between Berg’s Kammerkonzert and Schoenberg’s First Kammersymphony on the one hand, and Janacek’s Capriccio for Piano and Winds, Nielsen’s Wind Quintet and Bartok’s Piano concertos on the other – some of the playful percussive piano in the high registers in the middle movement and its interplay with the woodwinds even brought Messiaen’s Oiseaux Exotiques to mind… Harriet Wingreen and the New Art Wind Quintet play excellently, and are not significantly inferior to Gilbert Kalish and the New York Woodwind Quintet on Bridge 9068 (1996), except in the Finale where Kalish’s marginally greater urgency and bite are preferable. The early stereo (the LP came out around 1960, but I haven’t been able to find a contemporary review) sounds somewhat artificial in its attribution of the piano to one channel and the winds to the other. The earlier Nonet for Brass Op. 49 (1951) is also rather neo-classical in language and mischievously biting in atmosphere. Riegger is a master at eliciting a great range of colors despite the use of an instrumental group of similar timbre. The composer shows again his appetite for unusual instrumental combinations and sonorities in the short (4:15) “Movement for Two Trumpets, Trombone and Piano” op. 66 written in 1960 and one of his last compositions, contrapuntally elaborate but full of dance-like, jazzy bounce.

The Music for Brass Choir Op. 45 (and not op. 49 as indicated on the disc’s track listing) is an extraordinary work, so forward looking in its use of clusters for the sake of sheer sound color and atmosphere (rather than melody or harmony) as to evoke Ligeti’s Atmospheres. And it was composed in 1949! The mood is ominous and dramatic. It should be a staple of the brass band repertoire.

CRI has gathered together recordings of various origins, whose dates range from 1952 mono for the Symphony (the recording dates aren’t given on the CD, but the Symphony was the recipient of the 1951 Walter Naumburg Recording Award – a year after Schuman’s 3rd by Ormandy and a year before Mennin’s Third by Mitropoulos -, then recorded in April 1952 and originally released as Columbia ML 4902, paired with Mennin’s composition) to stereo 1967 (the works for brass and winds). The 1967 sonics are more than acceptable despite perceptible tape hiss, the symphony comes in acceptable if somewhat clogged mono, but the 1956 recordings of Romanza, Dance Rhythms and Music for Orchestra (originally on LP CRI-117 with works by Jacob Avshalomov and Norman Cazden ) sound very distant; not that is matters so much in the first two, but Music for Orchestra and the Symphony really cry for modern, stereo recordings. The original CD was published in 1990, and the liner notes expressed the hope that the reissue would help spawn a revival of interest in the music of Riegger. I don’t think it has, lamentably, but this disc makes me want to explore more.

Here are a few contemporary reviews of the original CRI LPs: 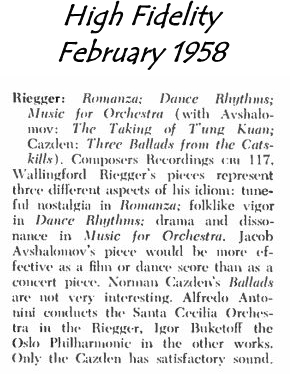 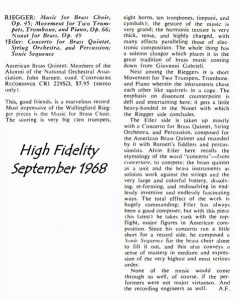 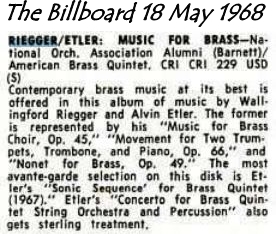 Since the deplorable demise of CRI, New World Records has acquired the label’s invaluable catalog, and I have the CD as a recent New World reissue. I’ve experienced difficulties playing it on old-old generation CD players (it stops, even when I barely move). I’ve experienced similar problems with other NW-reissued CRI CDs (“The Unknown Ives” by Donald Berman), so I am suspecting that New World copying process might be the problem.

And a post-script from January 2014: since listening to this disc I’ve acquired a number of Riegger scores and explored more of his music, and I am even more convinced of his stature. His early Study in Sonority op. 7, from 1927, isn’t twelve-tone but certainly classifies in his “dissonant” works. Scored for 10 violins or multiple thereof, it is one of the most extraordinary modernist compositions of that decade, worthy of standing alongside anything written by Ives or Varèse. That no recording of it should be available on CD or in any digital form, in an era when the most remote and dusty corners of all repertoires are represented on CD, is disheartening. New Dance op. 18 is a boisterous and syncopated concert overture in Coplandesque style, very exciting, and it too enjoyed a modicum of popularity in the LP era, including a Mercury recording by Howard Hanson in 1953, not CD reissued – the only available recording on CD is a 1958 broadcast recording by Stokowski published by Cala, R. Vaughan Williams: Symphony No.9 in e minor / Alan Hovhaness: Symphony No.2 ”Mysterious Mountain” / Riegger / Creston. No CD of his two String Quartets either – No. 2 op. 43 at least enjoyed two recordings in the LP era (both on Columbia) and the first only one, on 78s, by anonymous artists on the obscure Yaddo label. No kidding! Naxos, Delos, are you asleep? Riegger’s neglect is one of the greatest injustices of the contemporary American music scene.