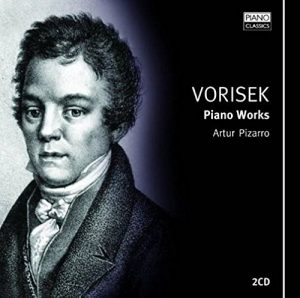 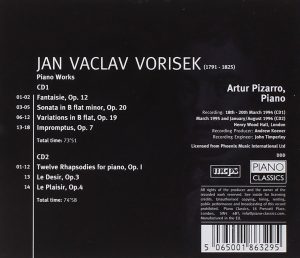 Good that Piano Classics has reissued as a twofer the two discs of Vorisek’s piano music (I think it is pronounced Vodjitchek) played by Artur Pizarro, released by the now defunct Collins Classics in the mid-1990s. See my reviews of the originals CDs for the complete details, 14582 (Fantaisie op. 12, Sonata in B flat minor op. 20, Variations in B flat op. 19, Impromptus op. 7) and 14772 (Twelve Rhapsodies op. 1, Le Désir op. 3, Le Plaisir op. 4). Vorisek is a near-contemporary (and was a friend) of Schubert, and Beethoven was his God. Indeed, his music sounds like a kind of missing link between the two, with adumbrations even of Schumann. The scores of all the compositions featured on this twofer are available from the International Music Scores Library Project (bless again those who uploaded them), and listening with scores has only enhanced by admiration for the music, helping me become aware of beauties that had eluded my attention on first hearing.

Artur Pizarro – a winner of the International Piano Competition in Leeds in 1990 – is an exceptional interpreter of this music. He has, litteraly, revealed the beauties of this music, which had been left burried deep under, if not totally betrayed and unsuspected, by previous performers, such as Radoslav Kvapil on Supraphon (recorded in 1974-75) and Olga Tverskaya on Opus 111 (2001)

Amateurs of the piano music of Beethoven, Schubert and the early Romantic era, don’t miss this.