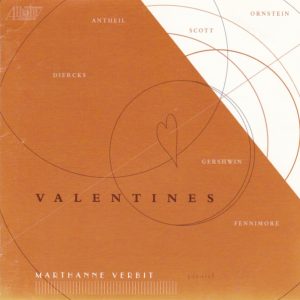 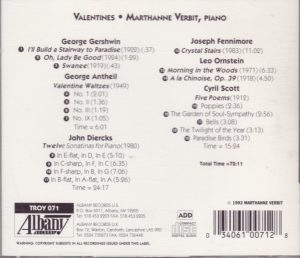 A well-filled disc that doesn’t offer as much as it promises
Originally posted on Amazon.com, 18 April 2007

The well-filled disc (72:11) might seem exciting on the face of it, but unfortunately it doesn’t offer as much as it promises. It brings together compositions by three early modernists – the Americans Leo Ornstein and George Antheil and the English composer Cyril Scott -, three small Gershwin transcriptions, and pieces by two contemporary American composers – John Diercks (b 1927) and Joseph Fennimore (b. 1940) – both composed on commission from the pianist, Marthanne Verbit.

The three Gershwin trifles are, well, typical Gershwin, but trifles. Antheil‘s Valentine Waltzes weren’t meant for publication. They are a very private and intimate affair – “affair”, indeed, as they were composed in 1949 for a married woman with whom the composer was having a secret relation. Don’t expect much: they are simple waltzes, mostly Chopin-inspired with a kind of Satie terseness. Verbit offers here a selection of four, but they are better found as a complete set, which Verbit later recorded on a valuable complete Antheil collection (see my review of George Antheil, Bad Boy of Music – pending transfer to this website, link will open new tab to relevant page at Amazon.com)

Cyril Scott (1879-1970) was one of those very typically early century English breed of eccentric and dilettante. In his 5 Poems from 1912 I hear nothing to fuss about. They are evocative short pieces, but the musical language is early Debussy – hardly original.

Scott is one of those cases of a composer who, having made his (however limited) mark in the early 20th century, has lived so old that he also witnessed a musical world dominated by people such as Boulez, Xenakis, Ligeti, Stockhausen, Nono, Berio – you name ’em. Leo Ornstein (1892-2002) is another and even more striking example. In the late 1910s and early `20s he was possibly the most notorious “modernist” of his days. His early retirement from concertizing and from the public eye sent him into oblivion, until his rediscovery in the ’70s. His “Morning in the Woods” is one of those late piece (1971) and its musical language is surprisingly backward-looking. It is a wistful and evocative tone-poem, full of aquatic ripples (here rather depicting wind in the leaves), harking back to Debussy and French impressionism (Severac, Le Flem come to mind, but maybe only because I have listened to their piano pieces recently).

Among the contemporary composers, Joseph Fennimore‘s 1983 Crystal Stairs is a big Romantic thing full of notes with some jazzy offbeat rhythms. Its style seems to me a not very palatable blend of Rachmaninoff and Gershwin.

John Diercks‘ Twelve Sonatinas from 1980 break no grounds in musical language or instrumental technique – I feel they could have been written by some early Russian or Austro-German modernist like Lourié, Mossolov, Hauer or Stephan Wolpe in the late 1910s or early 20s, or again composers from the “school” of Charles Seeger in the USA in the 1930s – but they are well-crafted and evocative. Moods are varied, sometimes tersely enigmatic, sometimes mysteriously dreamy, sometimes explosive, always with elaborate counterpoint. The 8th pays direct and acknowledged tribute to the music of Scriabin, and in the last one I also hear a reference to a passage in Scriabin’s Fourth Sonata.

And then – Ornstein‘s extraordinary 5-minute “A la Chinoise” from 1918, with its flurry of agitated activity, mostly in the piano’s upper registers, around “Chinese” themes. The piece seems as modern, imaginative, daring and evocative today as it must have some ninety years ago. One understands that young Antheil didn’t come out of the blue – but where did Ornstein come out of?

Still, less than thirty minutes of interesting to fascinating music may be just a little too short to warrant full endorsement of this disc.

Although recording dates aren’t provided, the pieces by Scott and Ornstein were originally recorded for Genesis Records in 1974 (Scott, Genesis GS 1049, see The Official Cyril Scott Website) and 1976 (Genesis GS 1066 – link to Discogs.com). The rest of those two recordings was reissued on a companion Albany CD Troy 070 (link again to Discogs), barcode 034061007029.