An exceptional and definitive tribute to a highly original and valuable composer, a champion of blending acoustic instruments and tape sounds
18 October 2016

This is an exceptional retrospective and tribute to a little-known (outside of the Netherlands) but particularly valuable and attractive composer. Much influenced by the “Musique Concrète” of Pierre Schaeffer, Ton Bruynèl (1934-1998) was, with Dick Raaijmakers and Jan Boerman, one of the three Dutch pioneers of electronic and tape music. His first compositions were principally for tape alone (Reflexes from 1961, CD 1-8, Résonance I 1962 CD 5-6, Collage-Résonance II CD 4-2 and Coda voor K CD 5-4 both from 1963, Mobile 1965 CD 3-7, Décor 1968 CD 6-1 and still in 1971 with Mobile II CD 4-4, 1972 with Elegy CD 3-4, Chicharras in 1975 CD 2-3 and Listening Landscape in 1977 CD 2-5). Collage-Résonance II, Coda voor K and Chicharras incorporate the voice of a speaker, and Elegy re-processes children’s voices and allows for an ad-libitum female voice reading texts from a Greek tombstone dating from 360 BC.

But Bruynèl’s distinctive “thing” rapidly became mixing acoustic instruments and tape (which he called “soundtracks”). One of the reasons was extra-musical: Bruynel soon realized that staring at four loudspeakers for an hour and a half made a very boring concert experience.

I first discovered Bruynèl a little over a year ago through his composition for two pianos eight-hands Rain played by the Dutch Pianists’ Quartet on Attacca Babel, from which I concluded: “here’s a composer worth exploring further”. And there’s no further than here. The compilation gathers 37 compositions of Bruynèl (for 39 tracks – there are two different recordings of Reliëf for organ and soundtracks, and one track is a short presentation of a piece by Bruynèl – in Dutch), including the same recording of Rain that was on the Attacca Babel CD, for a total time of circa 6:30 hours. The majority of his output is included: hereafter I’ve reorganized the works chronologically (and given the performers and recording dates of each when provided) and put in bold type the 16 works that are not on the set – among these, four are either his video opera Non sono un Uccello (completed in 1998, but on which he had been working since 1989, or offshoots thereof), and two are versions of pieces included, for alternative acoustic instruments (Toccare from 1987 version for harpsichord, Inker II from 1996 version from alto clarinet). Some of these recordings had been published before, on LP or CD, some on all-Bruynèl albums, some in recital albums. I haven’t systematically tracked Bruynèl’s discography, but the Bruynèl page at Discogs.com gives a good entry for the LPs. Note that, when a piece is featured on LP, it isn’t always that performance that was used for the retrospective set. In the case of Toccare for piano and soundtrack, featured on the LP Composer’s Voice CV 8003, it may be regretted that the retrospective didn’t include it together with the more recent performance of Robert Nasveld, since it was played by Bruynèl himself (recorded 4 September 1980), and as such it has an invaluable documentary value and fully deserved its place in the present set. Sometimes the info from the LP covers is illegible and I don’t know if it is the same version. In some cases the performers are the same but there are discrepancies in the dating of the LP and CV NEAR. Either they are different recordings by the same performers, or simply transcription inaccuracies – both are possible, I’ve seen cases where the same performers had re-recorded Bruynèl’s work, as Harry Sparnaay and Polo de Haas with Looking Ears, on the CD from Attacca, 2295, “Urgent – Fusion Moderne”, released in 2002, barcode 786497514427. I give the relevant info when available.

Obviously I can’t comment on every piece – but, with only very few exceptions, each is interesting, each is atmospheric, each offers both the best of “musique concrete” and the best of mixing acoustic instruments and reprocessed sounds. Indeed that is, I find, the double forte of Bruynèl: both his sonic imagination in the electronic reprocessing of sounds, and his skill at more than “mixing”: blending, these sounds with those of the acoustic instruments. Bruynèl’s tape invention is exceptionally interesting and often beautiful – this is, really, the best of “musique concrète” and tape music that I’ve heard. On the works for tape alone you get the sounds of the two Pierres, Schaeffer and Henry, even some of their signature sounds (pouring rain and thunder at the end of Listening Landscape CD 2-5) but more structure and coherence I find, whereas with Henry and Schaeffer I oftentimes perceive only collections of sounds as if randomly assembled. Listening Landscape in particular is a superb piece, dreamy, out-of-this-world, poetic.

But even more important is the way the tape sounds both enhance and blend with those of the acoustic instruments. The magnificent sonic invention at work there demultiplies the effect of the piano in Toccare (CD 1-4), Brouillards (CD 3-1) and Rain (CD 4-3) and makes them piano pieces of great originality and sonic invention. Even what sounds like a car furiously honking blends well with the instrument (here the organ) and sounds musical (Dust, CD 1-7 at 4:46): but, score consulted, it is actually the organ that honks there. Chatarra for harpsichord (CD 1-6) develops impressive power, sounding almost like Xenakis, although for a moment, at 5:18, with something like a musical saw in the background, it becomes dangerously close to a spoof of sci-fi music from the 1950s (Bruynèl meant it rather as an ironic requiem “to the hammer and sickle” after the fall of the Berlin Wall).

On its own, Bruynèl’s music for strings, in Translucent II (CD 2-4) or Cours des Nuages (CD 6-6), may not have been earthshaking – it sounds like anxiety-ridden and agonized music in the manner of Karl-Amadeus Hartmann or Alan Pettersson – but the way the strings are surrounded by and blended into processed sounds is impressive and fascinating, and the very notion of “acoustic music on its own”, as if the score for the acoustic instruments could be separated from the soundtrack and lead an autonomous life, loses any pertinence. It’s a sonic continuum.

Bruynèl’s music isn’t always “easy-listening”: Looking Ears for bass clarinet, piano and sound tracks (CD 2-1) is a powerful but thorny piece, its instrumental writing sounds very much like jagged “contemporary music”, but it works perfectly because the jaggedness of the bass clarinet and the piano harping on strings blend perfectly with the eerie pointillism of the sound effects. Signs for Wind Quintet and soundtracks (CD 6-3) is rowdy and cacophonous, but again wind quintet and reprocessed sounds compose a fascinating sonic continuum. In From The Tripod for female choir and soundtracks (CD 2-2), the vocal writing traverses many moods and styles, starting with moans, cries of despair, rhythmic scansion that use the most cutting edge styles of 20th century music, but continues with very tonal passages sounding like Christmas Carols or triumphant celestial calls evoking almost Russian Orthodox music. The work sets to music beautiful poetry by Bert Schierbeek, an habitual collaborator with Bruynèl, sung in French and beautifully translated (because, in poetry particularly, a translation has to be a work of art in itself) by Elly van der Vlugt.

Phases for orchestra and soundtracks (CD 4-1) is a very impressive piece, and I can only imagine what it must be heard live. It sounds very much like Ligeti’s Atmospheres and could have been used all the same by Kubrick in 2001: A Space Odyssey for the passage to the new dimension. I’ve wondered why Ligeti didn’t compose more than he did for tape and electronics, and my answer to that question is because what he did was to have a “real” orchestra produce sounds that emulated those produced by electronics. So in a way Bruynèl goes one step further by blending both. Reliëf for organ and soundtracks, especially in the second version offered on the set by Willem Tanke (CD 4-6), sounds very much the same but with organ substituting to orchestra, developing massive power, something like the sound of icebreaking or continental drift. As in Dust (CD 1-7), it’s hard to tell when the organ stops and when the tape sounds begin.

It’s not surprising that Bruynèl was particularly fond of the organ, which, in the words of Willem Tanke (who was also Bruynèl’ s student in electronic music), he viewed as “a synthesizer avant la lettre”, and his organ pieces are hugely impressive, playing on sound mass, wall of sounds (Kolom, CD 6-4; and I wrote this before reading Bruynèl’s description as “a great pillar of sound for a large space. The work is composed of blocks of sound without crescendos or diminuendos. The blocks constitute an ‘analysis’ of the sound”), slowly drifting tone clusters in the low registers (Arc, CD 5-7). In Imker I for four flutes and soundtracks (CD 6-2), the sound produced by the flute consort very much emulates the organ, enmeshed into a soundtrack sounding like a swarm of mutant bees out of some sci-fi movie.

But the acoustic instruments can also be extremely melodious at times, and in Dialogue I bass clarinet (CD 5-5) the combination with the eerie and haunting tape invention achieves painstakingly beautiful results. There are also some mesmerizingly haunting passages around 8:20 in Listening Lanscape for tape alone (CD 2-5).

The set is an exceptional tribute to Bruynèl not only through the works it collects, but also for the information it provides. It comes with a printed booklet offering a thorough general presentation of the composer, his life and compositional approach. But CD 1 comes with an HTML computer folder. I was afraid it wouldn’t read on Windows 10, but it does without problem, and can even be copied and pasted on the computer. There it gives access to detailed presentations of each piece, lyrics when relevant, more essays on Bruynèl, the catalog of his compositions, 30 photos of Bruynèl and his electronic studio, and even, bless them, the fac-simile of four of his scores: Brouillards, Dust, Looking Ears and Soft Song 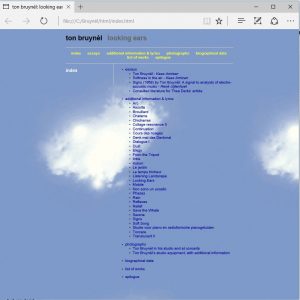 For some reason there are no presentations of Coda voor K (CD 5-4, not even included in his catalog of works, maybe because it is an occasional radiophonic piece), Resonance I for tape (CD 5-6), Décor (subtitled “electronic ballet music”) and Imker I (both on CD 6). Not that it’s going to be an impediment. 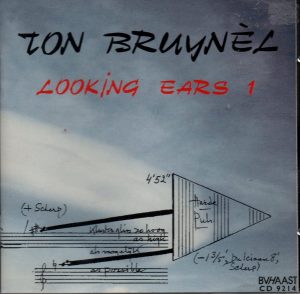 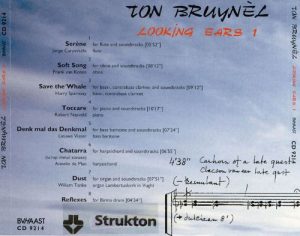 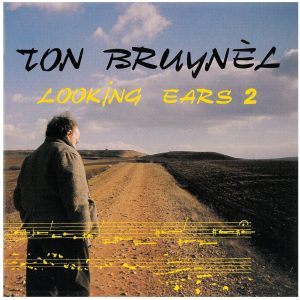 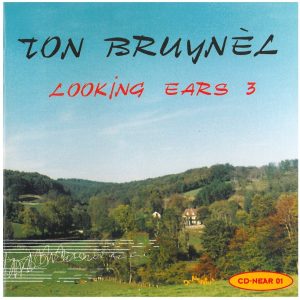 But of course this set offers much more. It is really the ultimate tribute to an original and valuable composer, and a collector’s must-have.

Score of Dust
Three different versions of Dust, including the one on the set by Willem Tanke, on Tanke’s website

NEAR (Nederlands Elektro-Akoestisch Repertoirecentrum) was the Dutch electro-acoustic program established in 1995 by Donemus (Documentatie Nederlandse Muziek), the non-profit documentation and publication center of Dutch music founded in 1947. Complete information (up until 2005) here (this will open a .pdf document in a new tab). It was terminated in 2013 together with the activites of the organization which by then topped Donemus, the Muziek Centrum Nederland (MCN), after the Ministry of Culture cut its funding (sad times). There seem to be some ongoing efforts by some of its ex-leaders to re-establish a similar but smaller foundation, now called DEARrr (Dutch ElectroAcoustic Resources, repertoire and reflection). See this. The last news are from 2014 though, and I don’t know if it came to fruition.