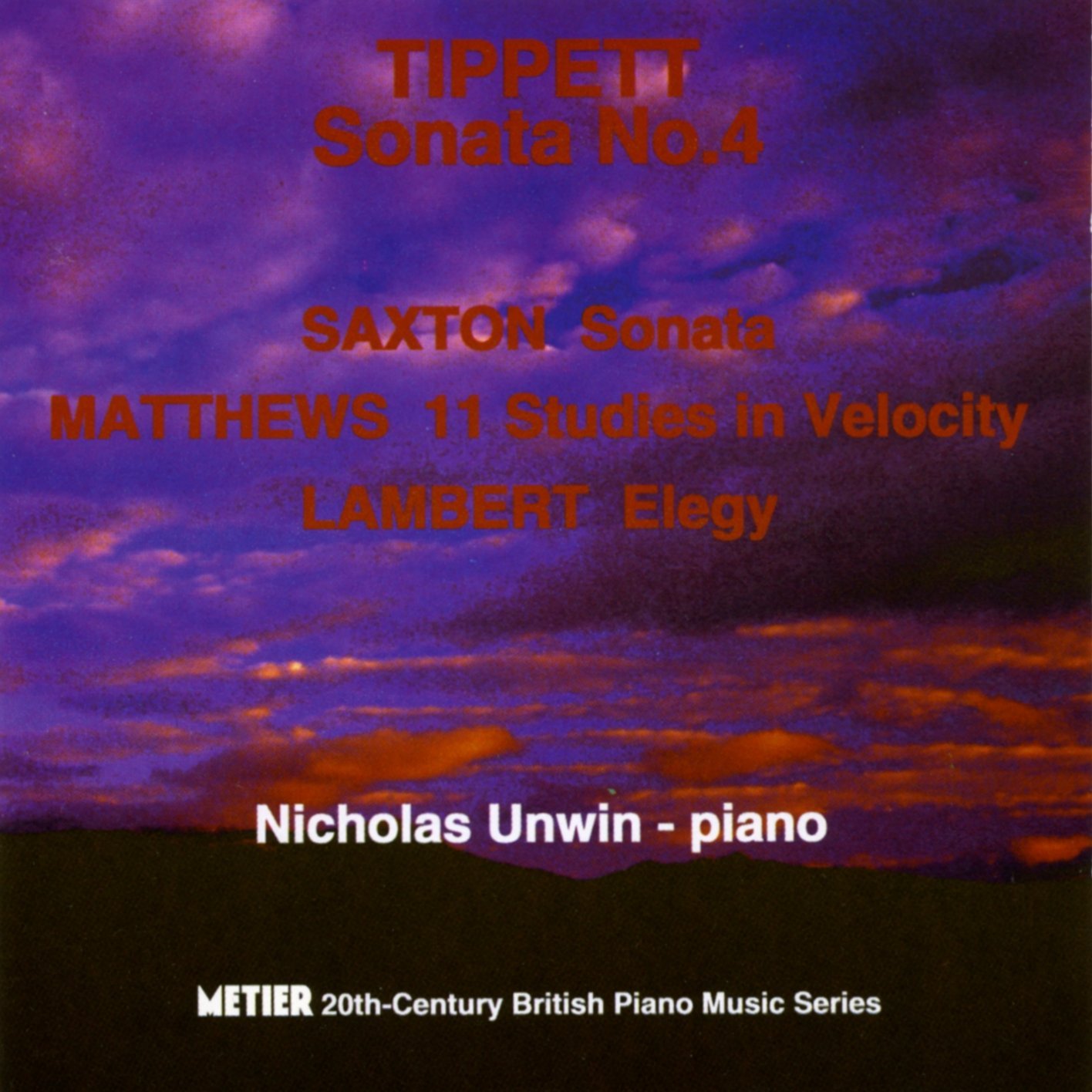 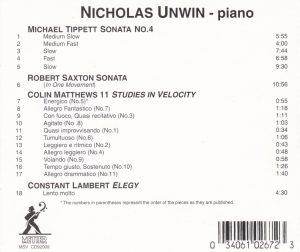 Note: my personal copy comes with the original 034061026723 barcode printed on back cover (see backcover photo above), and a sticker affixed over it on the jewel case with the new barcode 809730200922 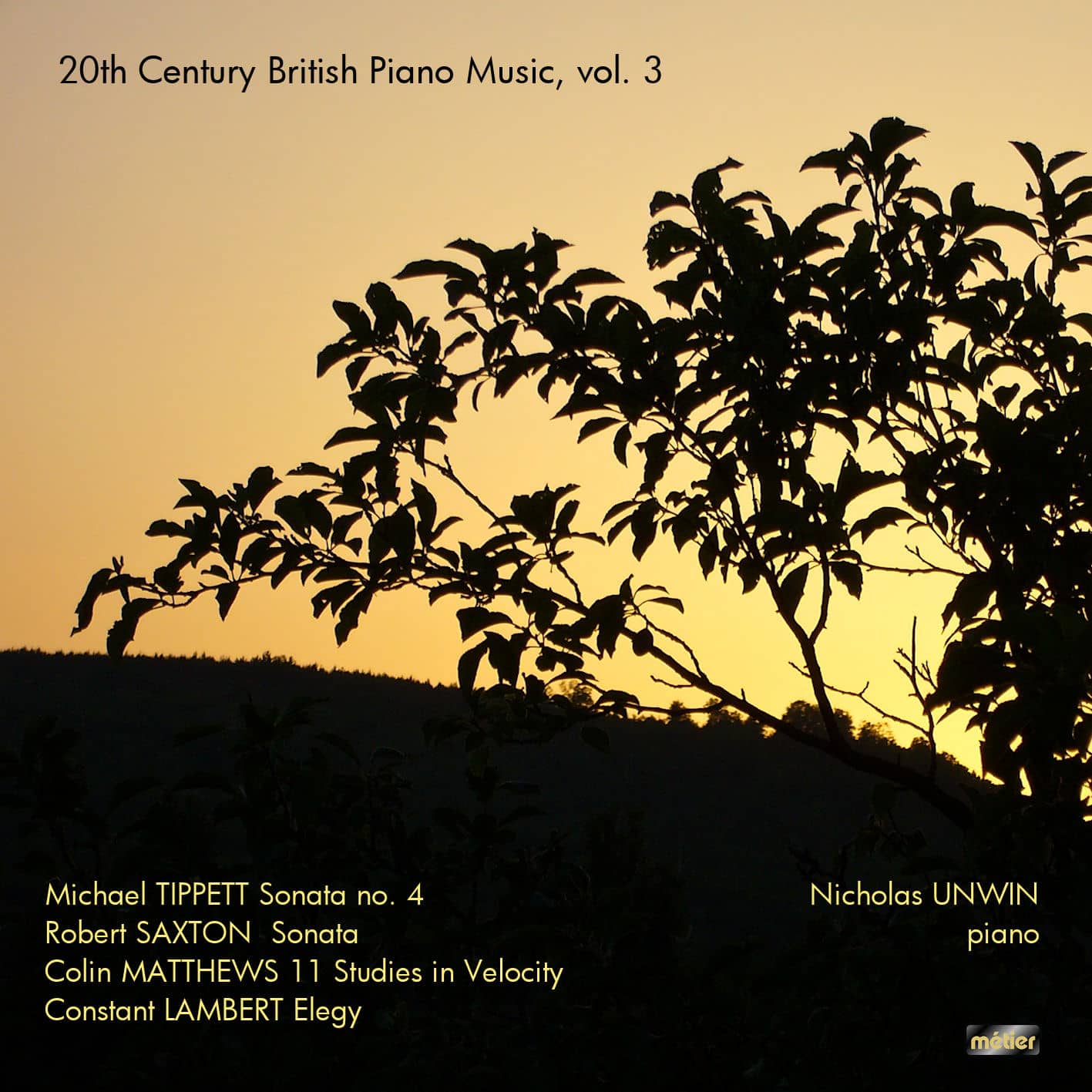 One of the most impressive recitals of contemporary piano music – British or otherwise
Originally posted on Amazon.com,  1 January 2014

I’ve spent many hours with Tippett’s four Piano Sonatas and they constitute a great body of works, not “avant-garde” in the serial manner of Boulez or Nono or Berio, not exploring new ways of playing the time-hallowed instrument like the strand that starts with Cowell and goes through Crumb and Stephen Scott, but still, hugely original, uniquely personal and quite daring even in their own (relatively) traditional language. A gap of 11 years separates the Fourth Sonata, completed in 1984, from its predecessor, and the same one separated the Third from the Second (1962).

The Fourth is couched in five movements – an architecture more readily found in string quartets and symphonies than in piano sonatas – and, as the Third, it may not be as immediately appealing as the first two, but it rewards careful listening. There are moments of great melodic appeal, moments of haunting dreaminess, but those are not the overriding impressions that it conveys. The Fourth is filled with Tippett’s typical decoration, profusion of grace notes or quasi-grace notes, and it has great moments of whimsicality. There is also the fantastic rhythmic imagination, which might make the shape of some phrases feel strangely awkward but, when you are following with a score, always surprises the attention with new and unexpected twists. In the Fourth Tippett also extends a technique already present in the First, writing, on three staves, three different and highly differentiated strands (here especially in the first three movements), so much so that, on paper, it’s hard to see how two hands can play them. If the first movement gives the impression of being episodic, it is: it is constructed of a succession of episodes. The third movement is a slow-fast-slow in a mirror form A-B-C (fast)-B-A and the fourth, a demented boogie-woogie reminiscent of Conlon Nancarrow’s Player Piano, in ever changing meters over obsessive runs of sixteenth-notes, is also in A-B-A form. The annotator Merion Bowen describes the second movement as a fugue, but I’m not sure it is strictly one, it looks and sounds more like a passacaglia, based on a pervading ground in a basic 3/4 rhythm, quarter-note followed by half-note, but it is also an extraordinary etude in dynamics, with Beethovenian jumps from forte or fortissimo (on the quarter-note and its derivations) to piano (on the half-note and its derivations). The composer himself describes the Finale as a theme and four variations, but frankly, had I not been told, I wouldn’t have recognized it a such, so transformed beyond recognition is the theme in the variations; for one of the variations, I am not even sure that I locate it right. I don’t know how much of this can be perceptible by and enjoyable to the “lay” listener without the score (and obviously I am no more), but following and comparing the three competing recordings with the Schott score has provided hours of admirative amazement.

Paul Crossley, who recorded the four Sonatas for CRD in 1984 (link will open new tab to my review), has unique legitimacy in these works, as he was the premiere performer of the Third (which he also commissioned) and Fourth, and Tippett even acknowledged his help and advice in writing both. That said, I have a few issues with his interpretations, and especially, in the Fourth, with his constant rubato, or lack of steadiness in pulse, which obscures the intricacies and subtleties of Tippett’s highly imaginative and “non-square” rhythmic writing. Another drawback of Crossley is that, with no complement and respectively 45 and 49 minutes per CD, he offers a relatively short measure. In 2006 Stephen Osborne also recorded the four Sonatas for Hyperion (with the Piano Concerto and Tippett’s earlier concertante work for piano, Fantasia on a Theme of Handel), a 2-CD set which is clearly now the first choice for these works, not only because of its interpretive excellence but because it complements the Sonatas with the composer’s two compositions for piano and orchestra.

But Nicholas Unwin offers a fine alternative choice, if not as coherent as Hyperion’s all-Tippett offering, as he also recorded the first three sonatas for Chandos in 1996. This Metier recording of the last Sonata was made earlier, in October 1994 or 1995 (the product info is ambiguous, only giving month and not year; the CD is copyrighted 1995, but that would be year of release, and given that the rest of the program was recorded at the end of November, it’s hard to think that everything was edited and issued within a month), part of a series which had three different pianists play Tippett’s Sonatas, paired with contemporary British piano works: Steven Neugarten in the Second, and Graham Caskie in the Third – and for some unknown but regrettable reason, Metier never completed their cycle with the First.

Unwin’s Chandos recording of the first three is an excellent version, yielding little to Osborne’s, and it is also the case with the Fourth here. Unwin is, like Osborne, superior to Crossley in that he plays with great rhythmic precision. Only in the fast passage of the slow movement, starting at 2:59, is he slightly less than entirely precise at the end of his phrases, and there is a small and wonderful decorative passage in “ringing bell” fast repeated notes at 1:57 in the Finale which Osborne plays more clearly because at light-speed and more precisely in time. There is also, first heard at the beginning of the first movement (0:27), a whimsical phrase in which both Crossley and Osborne apply an unmarked staccato, which adds to the whisicality and sounds great; Unwin plays it according to score. Other than that, his playing is very atmospheric, both in power, dreaminess and whimsicality, and his rendition of Tippett’s typical three part writing is, like Obsorne’s, beyond reproach, as well as his clear delineation of the circulation of sixteenth-notes between both hands in the rapid fourth movement. His second movement diplays a clear shaping of the dynamic contrasts, if not as dramatic and intense as Crossley’s. His slow movements (3 and 5) are more flowing than Crossley’s and Oborne’s, and I am mentioning this as fact, not as judgment: slower doesn’t necessarily mean better, I have no preference, and I even think that more flowing may make their overall shape easier to grasp by the listener without score. Incidentally, in Unwin’s recording the fifth movement’s variations start at 1:32, 3:04, 4:23 (that’s the one I’m not sure about), 5:56 and the theme is re-stated at 7:34.

As excellent as is Unwin’s rendition of Tippett’s Sonatas (both on Chandos and here), it isn’t so different from Osborne’s that it would entirely justify to have both recordings in your collection, unless you are a diehard Tippett fan. But the complements add great value to this disc. Robert Saxton‘s one movement Piano Sonata from 1981 is a great work and makes a perfect companion. The liner notes contain a heartfelt tribute of Saxton to Tippett, and I find his Sonata very “Tippettian” indeed, in the hazy dreaminess of its opening, the profusion of trills and grace notes, the passages of two-part writing, the moments of busy and at times furiously pounding digital activity, the singing line emerging from a dense halo of accompanying voices, the study in resonance.

Colin Matthews‘ Eleven Studies in Velociy are also hugely impressive pieces, also reminiscent of Tippett in some of their rhythmic disjunctness and mercurial capriciousness. But maybe I’m being over-extensive in calling the inspiration “Tippettian”, and am using the word “Tippett” only as a synonym for “brilliant and fantastic pianistic and musical imagination and inventiveness”. Each study is short, ranging from 35 seconds to less than two, for a total time of 12 minutes. They can be played in any order but must end with the last two, a Nocturne with cascading runs in the highest register over an ominous bass line, and a breathless and breathtaking Toccata unleashing a torrent of repeated notes ascending from low to high register. Metier has left a fifteen second blank after the last Study, and you really need it to let your pulse come back to normal (there is also a 20 second blank between Tippett and Saxton, which feels even longer, as Unwin lets Tippett’s Sonata end in the long fading resonance of the last chord). Unwin is impressively virtuosic in both the Saxton and the Matthews composition.

Constant Lambert‘s short Elegy from 1938 makes a fitting epilogue. It alternates between stark grandeur and a more melancholy and brooding mood, traverses harmonically elusive regions and makes you understand that Tippett, when he was composing his first Piano Sonata in 1937, didn’t come from nowhere. TT 62:25, with such a brilliant recital you’d have wished for more. Than is one of the most impressive recitals of 20th-century piano music – British or otherwise.