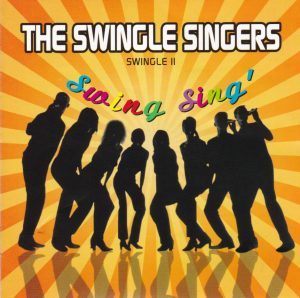 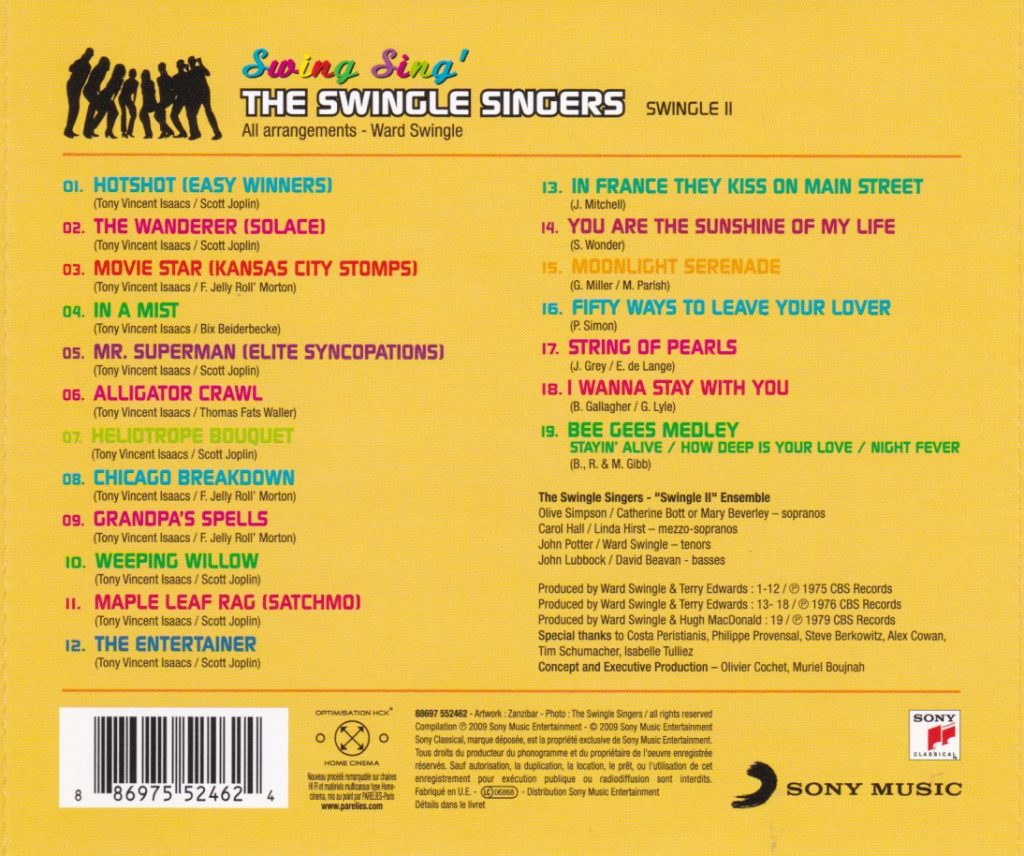 How much you might enjoy this disc probably depends on how much you enjoy the ragtimes of Scott Joplin, the jazz of Jelly Roll Morton, Fats Waller and Bix Beiderbecke and the 1970s pop music of Stevie Wonder, Joni Mitchell, Paul Simon, Gallagher & Lyle, and the BeeGees (and the crooning of Frank Sinatra / Glenn Miller). Or not. I’m no fan of pop/rock from the 1970s, but still I enjoyed that more than the rag and jazz.

In fact the CD culls the partial or total contents of four LPs published by CBS in the 1970s with the group then known as Swingle II, which was the name assumed in their recordings for CBS/Columbia by the vocal octet re-formed by Ward Swingle in London, after the “original”, Paris-based Swingle Singers had disbanded in 1973 (by then only four members remained from the ensemble founded by Swingle in 1962) . Later the group became the Swingles, the New Swingle Singers, and then again the Swingle Singers.

While the original Swingles had concentrated mainly on vocalizing the instrumental music of the great classical music composers – first Bach (Jazz Sebastian Bach), then Haendel, Vivaldi, Telemann and moving on chronologically to Mozart, Beethoven and the Romantics (see my reviews of Anyone For Mozart, Bach, Handel, Vivaldi? , Swingling Telemann and Getting Romantic – the new, London group started tackling the pops, the rags and jazz standards as well as the popular movie soundtracks, and this compilation is a good testimony of that new facet of their music making under the continued stewardship of Ward Swingle (who provides all the arrangements).

“Rags and All That Jazz“ from 1975 (UK edition CBS 80947, US edition Columbia Masterworks PC 34194) is here reissued complete (tracks 1 to 10), with arrangements of Joplin and early Jazz, to which six pop music numbers out of the 10 tracks from “Lovin’ You – Words and Music vol. II“

In principle, it is good to have those 1970s tracks back. Almost all the recordings of the Paris-based Swingle Singers have been reissued (and I’ve reviewed most of those reissues – see my Swingle Singers discography part I for the links), as well as those made by the later Swingle Singers, from the late 1980s on, when they set up their own label Swing, and also recorded for Virgin (see my review of A Cappella Amadeus and Bach Hits Back). On the other hand, their “middle” period, when they recorded mainly for Columbia/CBS (and in the early 1980s for Moss Music Group) is not well represented on CD – in fact it is, to the best of my knowledge, represented only by this reissue. CBS/Sony has done a pitiful job at giving a new lease on CD life to its Swingle heritage. I wonder if there is any relation with the fact that apparently the transfers here were done not from tapes, master- or else, but direct from the LPs: the surfaces are very silent but you do hear the typical swish in the few seconds of silence left at the end of each track. Might CBS/Sony have lost the original tapes of their Swingle recordings?

Whatever that may be, I don’t find the Swingles as effective and convincing here as when they vocalise the classical hits. It is not so much a matter of musical genre – although some of the rags of Joplin and the jazz of Jelly Roll Morton do sound excessively simplistic and repetitive to me: they are infused with a kind of contrived joy and a mood that tries hard at being spirited but leaves me cold, and I feel much more genuine joy in Bach. But more fundamentally, there is something of a paradox when the Swingles do what Jon Hendricks (the lyricist from the famous Lambert-Hendricks-Ross Jazz trio, see my review of Sing a Song of Basie) more or less invented, or at least brought to a state of perfection: doing jazz vocalese, e.g. putting words on what originated as instrumental music.

Much of that is lost when the instrumental music – the ragtimes of Joplin or the jazz standards of Jelly Roll Morton – are sung with newly-written words (which, despite the absence of any information about it in the liner notes, is what the arrangements of the album “Rags and all that Jazz” and the two additional songs after Scott Joplin from “Words and Music volume 1” were about; the lyrics were all written by Tony Vincent Isaacs), or when they cover pop songs and hits of the day. There, the Swingles sound “only” like an excellent vocal octet, rather than unique. In some of the songs the vocal virtuosity is awesome (as on track 9, the fast-tongued “Grandpa’s Spells” of Jelly Roll’ Morton). But however excellent, they are but one among others here (it’s interesting to compare their take on Paul Simon’s “Fifty Ways to Leave your Lover” with the King’s Singers’, on The King’s Singers: Good Vibrations – and I prefer the latter, because its percussion is purely vocal, and the vocals have more clarity and vividness), followers rather than path-breakers. And the fact that Sony didn’t even bother to print the lyrics in the booklet (they were provided in the original LPs) further impedes whatever enjoyment may be derived from the reissue – because, after all, unlike the earlier Swingle Singers, the enjoyment here is supposed to come from the words as much as from the music.

So you are left with just how much you enjoy those specific forms, the ragtime, the early jazz, or the 1970s pop music. I find that the pop songs have more verve, excitement and rhythm – and they have some scatting too; in fact, Glenn Miller’s “String of Pearls” is sung here purely scat – strange then that the song’s lyricist, Eddie de Lange, should be credited along with composer Jerry Grey). The Bee Gees Medley is fun, to make one regret that Sony didn’t reissue the complete “No Time to Talk” album.

The liner notes are informative enough on the Swingle Singers, but not at all on the pieces here arranged and performed. For ignoramuses like me in matters of popular music, crediting “String of Pearls” only to “J.Grey / E. de Lange”, or “I Wanna Stay with You” to “B. Gallagher / G. Lyle” isn’t very telling. In fact, I had never heard of any of them. Fortunately, the internet now provides just about instant universal knowledge. And did YOU remember Gallagher and Lyle? After their chart-making album “Breakaway” in 1976, from which the immortal “I Wanna Stay With You” selected by the Swingle II is excerpted, “their mellow sound was only briefly in vogue, and elusive further success prompted their split in 1979” says the invaluable people’s processed online encyclopedia. So the Swingles were there perfectly in the nick of time. For Bach, fortunately, we have eternity.