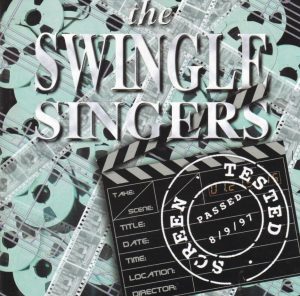 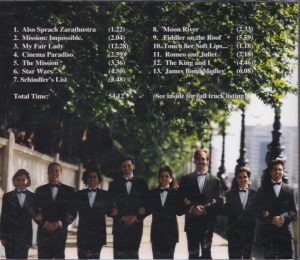 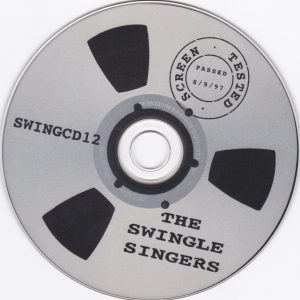 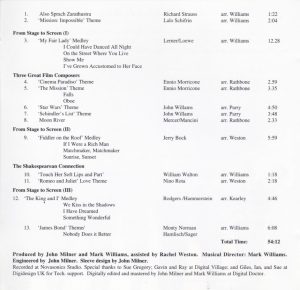 The Swingle’s cinema – but they could have chosen more familiar themes
Originally posted on Amazon.uk, 18 May 2011

The original, Paris-based Swingle Singers founded by the American Ward Swingle (born in Mobile, Alabama) started out, in 1963, scatting (and jazzyfying through the adjunction of a drum and double-bass section) the instrumental music of the great classical music composers, Bach, then Mozart, Haendel, Vivaldi, Telemann  and other baroque composers, the Romantics and the early 20th-Century Spanish composers. Their forays out of that turf were rare, and took the form of an album of Christmas music , one devoted to the popular hits of American vernacular music, with medleys of Country Dances and patriotic songs, Negro Spirituals, Songs of Stephen Foster and Porgy and Bess. Their last album was an ambitious composition by the French jazzman and critic André Hodeir, ironically titled “Bitter Ending” (not reissued to CD). The group disbanded in 1972. See my Swingle Singers chronological and critical discography, Part I, for the complete list of the French Swingles’ albums.

It is when Swingle, now moved to London, re-formed a new group in 1973, first dubbed Swingle II (then The New Swingle Singers and the Swingles) that he started tackling more systematically the hits of ragtime and jazz, pop music, popular song and ballads, and film music. If I am not mistaken their first essays in the latter genre were contained in their 1974 album “Words and Music“: “The Way We Were”, after the famous Academy Award winning song for the 1973 Sidney Pollack movie co-staring Barbara Streisand and Robert Redford, and the Academy Award winning song “Windmills on Your Mind” from the 1968 Norman Jewison film “The Thomas Crown Affair” (Steve McQueen and Faye Dunaway). These have not been reissued on CD, and in fact the Swingles’ 1973-late 1980s period is very badly represented on CD (only one compilation by Sony, “Swing Sing“). In various later albums they did Chariots of Fire (in the LP titled “Instrumentals” from 1986, Polydor POLD 5206, not reissued to CD), Star Trek, The Pink Panther, Superman (CD “Notability“, 1993, SWINGCD 7), Henry Mancini’s Moon River (from Breakfast at Tiffany’s with Audrey Hepburn in 1961), Walt Disney’s “Someday My Prince Will Come (both on the CD “New World“, SWINCCD 10, 1995). The two latter CDs, self-produced and (like this one) published on the Swingle’s own label, Swing, have had only limited circulation.

So here we get a CD full of it – including a remake of Moon River (track 8). The disc is, as usual, entertaining and enjoyable – more, evidently, when you are familiar with the original film themes, which, given my own illiteracy in that domain, amounts to less than half the tracks: Strauss’ Zarathustra theme from Kubrick’s 2001 A Space Odyssey evidently, Mission Impossible, Star Wars (my kids loved it, but how could the arrangement have left out the theme of Darth Vader?), Fiddler on the Roof and the James Bond Medley (which uses not only the famous Monty Norman theme, but also the James Bond song from “The Spy Who Loved Me”, 1977). Well, for one, I can’t be blamed: track 10, “Touch Her Soft Lips”, comes from William Walton’s score for Lawrence Olivier’s 1944 version of Shakespeare’s Henry V (Olivier’s directorial debut, incidentally): and how many are going to be familiar with that? But then it might be not just me. I can think of many more famous film themes (I mean: more film themes that are more famous) that the Swingle Singers could and should have sung and that would have been likely to ring more bells: Rota/Fellini’s La Strada, anything by Bernard Herrmann/Hitchcock or Enio Morricone/Sergio Leone, Sound of Music, Singin’ in the Rain, the Wizard of Oz, Deliverance, Doctor Zhivago, Jaws… and the famous and trumpeting 20th Century Fox theme.

Another limitation I find is when the Swingle Singers sing actual lyrics, rather than scat the instrumental music, as in My Fair Lady, Moon River, Fiddler on the Roof (sorry, but whoever sings it, bass Mark Williams or David Porter Thomas, is no match, really, to Topol’s original), The King and I. When they do that, they just sound like an excellent a cappella group singing songs – one among many others – rather than as unique as when they scat Bach. But, evidently, no film score is ever going to sound as unique as Bach.

TT 54:12. The CD shows up occasionally on eBay. The listing on the Amazons is for the Japanese edition.