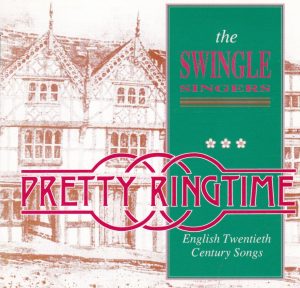 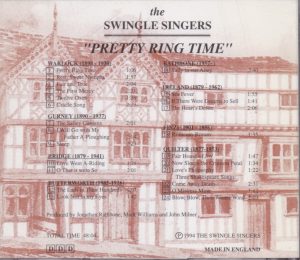 The Swingle Singers when they try to be just any British a cappella madrigal ensemble
Originally posted on Amazon.com, 10 October 2012

The Swingle Singers, the vocal octet of former session jazz singers founded in Paris and in 1962 by Alabama-born Ward Swingle, made an instant success with their first album, Jazz Sébastien Bach (1963), in which Swingle well-nigh invented the style that made the ensemble so famous: scatting and jazzyfying the great instrumental hits of Classical music. I’ve contended in my other reviews that what made that style so engrossing and exciting is that the Swingles raised to the level of high art what we all do inadvertently, without even thinking about it, walking on the street, gardening, washing the dishes, mowing the lawn – and, famously, under the shower: humming or whistling our favorite tunes – the Swingles being to that what a Picasso is to your three-year old’s drawings. And I’ve also claimed that, by so doing, they only returned instrumental music to its very origin and essence: the human voice, since, presumably, the Bachs, Mozarts and Vivaldis all hummed their tunes to themselves before committing them to the music sheet.

The original Swingle Singers from the 1960s more or less specialized in those great hits of Classical instrumental music (no works originally written for the voice) and when they strayed from that rule (as in their 1968 Christmas album “Christmastime” or their collection of American vernacular music from 1969, “American Look“), still they purely scatted even those compositions that were originally songs, turning them, so to speak, into “instrumental vocal music”. I’ve documented the Paris Swingles on my – I hope – very thorough chronological and critical discography, Part I.

It is only after the Paris-based group had disbanded (in 1973) and Swingle had re-formed a new group, now based in London, with the name Swingle II (later The New Swingle Singers, The Swingles and then returned to the original title Swingle Singers), that they started tackling more systematically the hits from pop music and rock, jazz and ragtimes, Broadway, film music, together with actually singing the lyrics (with scatted accompaniment) from the original songs or even, in some cases, specifically written for their arrangements of what were originally instrumental pieces (the ragtimes), in a manner obviously inspired by what had been brought to a state of instant perfection by the famous jazz vocal trio Lambert-Hendricks and Ross, the so-called Jazz vocalese. That middle period of the Swingles (mostly on what was then CBS in the 1970s, but also EMI and, in the early 1980s, Polydor) is not well documented on CD: there is only one compilation from the CBS albums, “Swing Sing“. For a complete view, see my discography, Part II. Likewise, the few CDs from the Swingle Singers’ own label Swing from the 1980s are hard to find at reasonable prices and, because they didn’t have a barcode, some are not even listed on your customary commercial website. But the Swingle Singers pursued this new style of theirs to this day and it is well documented on their numerous CDs from the 1990s and after, even if, here again, those published on their own label that were not later reissued by other labels (like Virgin Classics or Primarily A Cappella) are also hard to find. In their Bach and Mozart recordings from the late 1980s/early 1990s, they now mixed arrangements of instrumental pieces and vocal pieces, excerpts from Bach cantatas, chorales or masses, arias from Mozart operas (see my reviews of Virgin Classic’s “A Cappella Mozart” and “Bach Hits Back“). They did a Beatles album, an Irving Berlin collection, and filled their various albums with old and new arrangements of the pop, rock and jazz hits.

But in the present disc, “Pretty Ring Time”, recorded in July and August 1994 and published as Swing CD 9, they complete the full circle, now tackling early 20th Century British art song (although many are folk-inspired) – with a collection of 23 songs of Warlock, Gurney, Bridge, Ireland, Finzi, Quilter (tenor and arranger Jonathan Rathbone adds one of his own). It isn’t the first time that the Swingles sung that kind of repertoire: in 1977 they recorded for RCA a collection of “English and French Part-Songs” (not reissued on CD) with included works of Vaughan Williams, Stanford and Britten, but those were all, originally, chorus works.

I have to say that I don’t find the Swingles as effective and enjoyable here as in their original style of scatting instrumental music. Sure, the arrangements and realizations are sweet and silky, elegant, pretty, entertaining, pitch-perfect, and the Swingles here superbly illustrate the long tradition of “a cappella” English madrigalists. But that’s precisely where lies the limitation: they sound like an excellent ensemble of English “a cappella” madgrigalists – no more, no less excellent than a host of excellent ensembles of English “a cappella” madrigalists. The songs are enjoyable, sweet and silky, elegant, pretty, but they have nothing to lift one’s heart and feet as Bach’s Badinerie or Mozart’s Turkish March as sung by the Swingles, or to send one directly and instantly to heaven as Bach’s Air in G, Largo from the harpsichord Concerto or the slow movement from Mozart’s 21st Piano Concerto. Agreeable, and almost instantly forgettable. TT is also a stingy and frustrating (but customary with the ensemble) 48-minutes. This disc belongs to those Swing CDs that are hard to find, but the sheet music publisher Peters International sells some copies, presumably because they are also the publishers of the sheet music of the arrangements sung by the Swingle Singers.

Music lovers more familiar than myself with the original songs might find more enjoyment here than I did.