The Swingle Singers: “Notability – An A Cappella Anthology”. Swing CD 6 (1993) no barcode 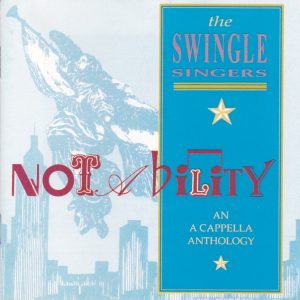 Swing CD7: hard-to-find CD from the Swingle Singers, and some rare repertoire too
Originally posted on Amazon.com, 10 October 2012

This is a rare CD. Recorded in 1993 and published on the Swingle Singers’ own label, Swing CD7, it was, unlike others, never picked up and reissued by another label with a wider circulation, like Virgin or even Primarily A Cappella. The publisher Peters International sells some copies (obviously because they are the publishers of the sheet music of the arrangements sung by The Swingle Singers), but listing them in the “music instruments” department will certainly not help the Swingle Singers fans find them.

There was an unusually long gap between the group’s previous CD, “If It’s Music, We’ll Sing It“, Swing CD 6 (mostly a sampler of previous or contemporary Swingle CD albums published on their own label or by Virgin Classics) and this one, three years, and something dramatic must have happened with and within the group because only two members remained, alto Heather Cairncross and tenor (and often arrranger) Jonathan Rathbone (however Tom Cunniffe, the Swingle Singers’ discographer and biographer, mentions no such “crisis” in that period of the ensemble’s history – link will open a new tab to the relevant page on Cunniffe’s Jazzhistoryonline). Individual members had always changed, but more progressively. Still, it is a tribute to the collective skills of the ensemble and perhaps of the guiding hand of its founder Ward Swingle, that the members may change, but the sound remains the same.

The CD features the mixture, become customary with the Swingle Singers from the mid-1980s onwards, of classical music (two Rossini overtures, songs of Schubert and Schumann), Jazz and Broadway standards (four songs of Irving Berlin, Rogers & Hart’s “My Funny Valentine”, Duke Ellington’s “It Don’t Mean a Thing (If It Ain’t Got That Swing)”, popular and vernacular songs (Stephen Foster medley), pop music (the Beatles’ “Penny Lane”), sentimental popular songs and ballads (“My Foolish Heart”, a song by Victor Young with lyrics by Ned Washington, first introduced in the 1949 film of the same name, Randy Newman’s “I Think it’s Going to Rain Today”), traditional or imitation of it (the spiritual “My Lord What A Mornin'”, the Japanese “Ha Ru Ka Na To Mo Ni”), film or TV music (Star Trek, Superman, Pink Panther).

One notable feature of the CD is that most of these arrangements make here their first recorded appearance, and many, their only one. The Swingle Singers had recorded a complete Irving Berlin disc in 1988, “Nothing But Blue Skies“, including the four songs reprised on Notability (Puttin’ on the Ritz, How Deep is the Ocean, It’s a Lovely Day Today / Isn’t This a Lovely Day, Count Your Blessings), but their Beatles tribute was later, in 1999, “Ticket to Ride: A Beatles Tribute” (Swing CD 15, reissued on Primarily A Cappella 4315), and included a new recording of Penny Lane: the two versions are nearly undistinguishable, with a slight preference for the later one, due to its fuller and more vivid sonic perspective. They would also reprise the Pink Panther theme in their 1997 “Live!” album (Swing CD 11), My Funny Valentine, It Don’t Mean a Thing and My Foolish Heart in “Mood Swings”, Swing CD18, in 2002.

The rest of the material gets here its (so far) only recording: Star Trek and Theme from Superman (with the Pink Panther they would have been good candiates for the 1997 “Screen Tested” album devoted to film music, Swing CD 12), the two Rossini Overtures, the Schubert and Schumann songs, Randy Newman’s “I Think It’s Going to Rain Today”, the Stephen Foster Medley, “My Lord What a Mornin'” and “Ha ru ka na to mo ni” (not even live in Japan in 2000, Swing CD17).

As always, the Swingles’ liner notes and track listings are irritatingly uninformative about the sources of the songs. At least, here, they give the names of composers and lyricists, but still: any idea what the Japanese “Ha Ru Ka Na To Mo Ni” by an “Isobe” is? Well, I did find one answer on Google: “Yoshi Isobe: Haruka Naru Tomoni/ Chigasaki Mixed Choir, Tokyo Motet Choir” (it’s on You Tube and it sounds awful). Notice how the “RU” from Naru was missing from the title on the Swingles disc. The music is sweet and saccharine, simplistic and uninteresting, suitable for untrained amateur choruses, I wonder what took the Swingle Singers to arrange and record it.

I’m not so enthusiastic with their Jazz, Broadway and pop arrangements either. The Swingles sing them with their customary elegance and silkiness, and seem to be having fun in the lively numbers, but many of these songs sound to me like sentimental or entertaining fluff. Sorry, but neither Irving Berlin nor Randy Newman measures up to the heights of excitement and depths of emotion of the Swingles’ Bach or Mozart or Vivaldi arrangements.

And I’m not sure that the Octet’s sleek elegance always helps either. Their Berlin “Puttin’ on the Ritz” is fun and the Stephen Foster medley sometimes is as well (especially in the more lively songs like “O Susanna!”, and when the richness of the arrangement transcends the originals), but their take on Ellington’s “It Don’t Mean a Thing”, while elegant and entertaining, simply lacks the wild punch of Ellington in any of his recordings – this is Oxford/Eton Jazz. Likewise, you love or you don’t love Randy Newman’s ballad – many seem to find it one of the greatest song ever, to me it is sentimental mush – but one thing is sure: it needs the raspy voice and drooping and burdened delivery of Newman himself.

Also, I’m not so fond of the Swingle Singers when they sing – I mean, when they sing lyrics with vocal accompaniment, rather than doing what Ward Swingle invented in the seminal 1963 Bach album: scatting instrumental music. When singing the lyrics of the songs of Foster, Berlin, Rogers & Hart (especially the sentimental ones), the Swingles just sound like any other excellent A Capella ensemble, rather than uniquely Swingle.

So, other than the film music – Pink Panther especially is a winner – the most entertaining and fun I find are the two Rossinis, the Overtures to the Barber of Seville and the Thieving Magpie – they are dazzling. The German Lieder are OK (German accents aren’t faultless), especially Schubert’s Erlkönig, with a turbulent scatting accompaniment, and the various characters divided between four different singers (including the narrator); the vibrato-less soprano nicely emulates a kid, but here again the Swingles’ men are elegant rather than menacing (Death) or torn with anxiety (Father), and the two of them are no match for Fischer-Dieskau alone. And whatever the collective talents of the Swingles’ singers, the soloists in charge of the lyrics in the two enrapturing Schumann songs are talented amateurs compared to your favorite Lieder Sänger or Sängerin. Oh well: Rome ruled the world based on the collective discipline of its armies, not the individual exploits of its military.

The disc opens with a short adaptation of the Star Trek theme, with words of the Swingles’ own making: “London, the final frontier. These are the voyages of the Star group Swingle. Its mission: to explore strange new sounds, to seek out new sounds and new arrangements, to boldly sing what no man has sung before”. A fitting mission statement.

TT 62:36, much more generous that usually with the ensemble.