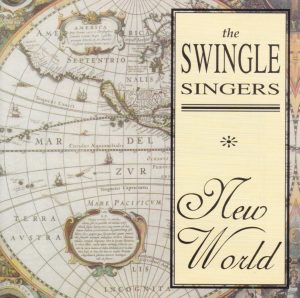 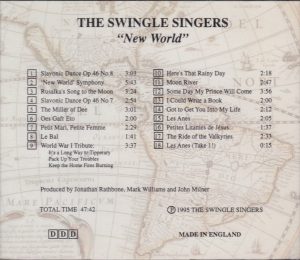 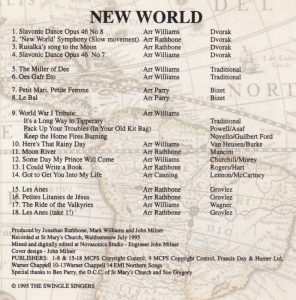 Lovely recital by the Swingle Singers from 1995
Originally posted on Amazon.com, 14 October 2012

Hard-to-find recital by the Swingle Singers, recorded in July 1995, because it was published on the ensemble’s own label, SWINGCD 10 and, unlike other similar recordings, never reissued and given bigger circulation by other labels like Virgin Classics or Primarily A Cappella. The music publisher Peters International seems to be still selling some copies, presumably because they are also the publishers of the sheet music of those arrangements for vocal octet.

I haven’t found all the CDs of the Swingle Singers from the 1990s and 2000s entirely successful, especially those in which they sing arrangements of whatever successes of pop music of to- or yester-day, standards of Broadway or Jazz, folk-music, because there they sound just like an excellent A Cappella vocal octet rather than like the unique Swingle Singers. What Ward Swingle invented back in 1962 was a way of scatting, or rather “dee-duming” instrumental music (since nothing was improvised), first applied to the “greatest hits” of Classical music, then to Christmas music and American vernacular. It was similar but different from what the Hendricks-Lambert-Ross trio had brought to a state of perfection in the late 1950s, inventing lyrics to emulate the instrumental sounds of the standards of Big Band jazz (the so called Jazz vocalese), which was Frenchified by Mimi Perrin’s Double Six of Paris in the early 1960s (of which Swingle wa briefly a member before establishing his own group). But in the 1970s the newly formed English Swingle singers (first called Swingle II) became more “mainstream”, tackling songs from pop music, Broadway, Jazz, popular – and singing the lyrics, rather than dee-duming them -, or even “vocalesing” Jazz instrumental music or Ragtimes in the manner of Jon Henricks (who even wrote lyrics for one of the Swingle singers’ albums). It was OK when the dee-duming rhythmic underpinning remained (usually in the more dynamic songs), but in all the sentimental and crooning ballads, as pretty as was the collective sound of the vocal octet, the Swingles sounded just like any other pretty vocal octet. Add also – sorry fans of popular music – that the source material, as entertaining as it was, was rarely as masterly and sublime as the greatest hits of Bach and Mozart.

Nonetheless, this one offers a fine mixture, customary with the Swingle Singers since the early 1980s, of purely dee-dumed classical hits (including the Largo from Dvorak’s New World Symphony, giving the disc its title, and two Slavonic Dances, and Wagner’s Ride of the Valkyries, and arrangements of piano pieces of Bizet and Gabriel Grovlez), popular song (“Here’s That Rainy Day”, originally by Jimmy van Heusen with lyrics by Johnny Burke, covered by many jazz and pop singers; Henry Mancini’s “Moon River” on lyrics by John Mercer, sung by Audrey Hepburn in the 1961 film “Breakfast at Tiffany’s” and covered by many artists since), pop music (the Beatle’s “Gotta Get You Into My life” – the Swingles had done a number of Beatles arrangements before and four years later they recorded a full disc of them, “Ticket to Ride: A Beatles Tribute”, but this is their only recording of that particular song), Broadway (Rogers and Hart “I Could Write a Book” from their 1940 musical “Pal Joey”), traditional and vernacular (“Miller of Dee”, “Oes gafr eto”, a medley of patriotic songs from World War I including “It’s A Long Way to Tipperary”), film music (“Someday My Prince Will Come”). See the uploaded photo for the detailed track listing.

As usual with the Swingle Singers’ records, the credits are so minimal, just listing last name of composer and, when relevant, lyricist, as to be very uninformative, and some amount of Internet research had to be done to establish the exact sources of what they sing. The two Bizet pieces, “Husband and Wife” and “The Bal”, are the last two numbers from his suite for two pianos “Jeux d’Enfants”. The Grovlez pieces are taken from his collection of piano pieces “L’Almanach aux Images”. Gabriel Grovlez is described in his Wikipedia entry as “an eminent French composer and conductor” – I must be the first time I even hear about him, but apparently the collection is a standard of UK 9th-grade piano teaching; each of the pieces is headed in the score by the poem by the French symbolist poet Tristan Klingsor that inspired it [returning to that Wikipedia entry ten years later, upon repost on discophage.com, it seems that Grovlez is no more an “eminent” composer and conductor]. The Swingle’s arrangement of “Petites Litanies de Jesus” sets back one verse from the poem, “Souriez-moi” (“Smile to me”) – probably meaningless if you haven’t read the rest of the poem (two four-verse stanzas, a kid’s humble plea to Jesus) but very appropriate when you have: the music says the rest. The arrangement of “Les Ânes”, the Asses, integral with braying, is hilarious – so much so that the CD ends with a repeat track, “take 1!”, in which the singers can’t help but crack in laughter. What the CD calls “Oes gafr eto” is in fact “Counting the Goats” aka the Welsh folk song “Cyfri’r Geifr”, which the track listing titles from its first line. If the Wikipedia entry is to be believed, the CD is also wrong to credit “A Long Way to Tipperary” to “traditional”: it is a British music hall song written in 1912 by Jack Judge.

It’s a lovely recital, a good introduction to the variegated styles of the Swingle Singers and one whose value is compounded by the fact that of all these arrangements except “Moon River” and “Some Day My Prince Will Come”, it is the only recording they made. Only drawback is a TT of 47:41. With such good things, you want 30 minutes more.