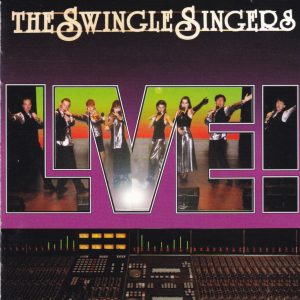 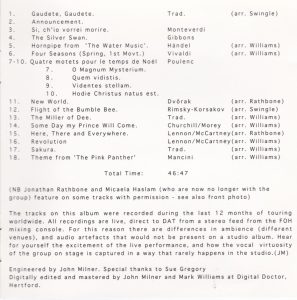 Hard-to-find, a mixture of classical and “pops”, of old and new and sometimes new in the old, agreeable as always, not indispensable
Review written in 2011, not posted at the time on Amazon.com, the CD not being listed

A number of CDs of the Swingle Singers were self-produced and published on their own label, Swing, with very limited circulation (I bought this one direct on their website). Some were licensed to other labels – Virgin Classics for those recorded in the late 1980s and early 1990s, Primarily A Cappella for those recorded at the turn of the millennium – and thus given wider circulation. Among those NOT reissued by other labels, very few are listed on this website [Amazon.com], and one wonders through what miracle those that are listed, have been. This one isn’t, neither here nor on the European sister companies, and I am writing this review just as a principle.

“The tracks on this album were recorded during the last 12 months of touring worldwide” say the liner notes. The recital is short (46:47) and it mixes new material and old standards. I haven’t found any trace that the ensemble previously recorded Monteverdi’s madrigal Si, ch’io vorrei morire (from the Fourth Book of Madrigals) and Poulenc’s Quatre motets pour le temps de Noël, the two Beatles songs (and, incomprehensibly, they didn’t even reprise “Here, There and Everywhere” on their Beatles album from 1999; there is little to choose between the two recordings of “Revolution”) and the Japanese traditional song Sakura.

The group, then called “Swingle II”, did record Ward Swingle’s arrangement of the the Hornpipe from Händel’s Water Music on their CBS “Baroque” album from 1976 (also unreissued to CD – link will open new page to my review), but this one here is a new arrangement by bass Mark Williams. Likewise, the first movement of Vivaldi’s Spring (which they recorded complete in 1972 – but it was, then, the French Swingle Singers, on their album The Joy of Singing) is also a new arrangement by the same Mark Williams, here substituting the voices to the original “real” bass and drum accompanying section. I prefer the earlier version, with its more dynamic approach (here it is more sensuous and languid), its “real” rhythmic section, its more voluble trilling, and its more “sensurround” sonic perspective – plus, it had the two remaining movements. But it doesn’t mean that the new one isn’t enjoyable in its own right.

On the other hand they did tackle the opening Gaudete Gaudete in their 1986 Christmas album for Polydor (a track reissued to CD in the 1987 Christmas album published by the ensemble on its own label, Swing CD 3), Gibbons’ The Silver Swan (from his 1612 First Set of Madrigals and Motets of 5 parts) in the 1974 CBS album “Love Songs for Madrigals and Madriguys”, un-reissued on CD. They were known as “Swingle II” back then and the lineup was, evidently, entirely different. Only one member, tenor Jonathan Rathbone, remained from the 1986 Polydor Christmas recording.

The slow movement from Dvorak’s New World Symphony, the traditional song “Miller of Dee” and Walt Disney’s (it’s actually credited to Churchill and Morley) “Someday my Prince Will Come” first came on the 1995 “New World” CD (SWINGCD 10, as difficult to find as this one). Rimsky’s “Flight of the Bumble Bee” is an old Swingle standard, first appeared on the 1980 “Folio” album published by EMI (Moss Music Group in the US); on CD it comes also on the “Live in New York ‘82” recital (Swing CD R01) and the “Reflection/Live at Ronnie Scott’s” compilation (Swing CD 1/2). Gerwhwin’s “Fascinating Rhythm” was also an old companion, first appeared on the LP album Skyliner (1979, EMI / Moss Music Group), then on the two CDs mentioned just above, and it is featured again on the 40th Anniversary retrospective, published by Primarily A Cappella in 2004, PAC 4530. The theme from Pink Panther first appeared on “Notability” (Swing CD7, 1993, hard-to-find).

Despite its short timing, the CD can be recommended to those who don’t have access to all the unreissued LPs and hard-to-find Swing CDs mentioned in the review – if they can find this equally hard-to-find CD! To me, ultimately, the recital is interesting mainly for offering the Swingles’ take on the Monteverdi, Gibbons and Poulenc (and, other than Gibbons, their only one, and even Gibbons is the only one on CD), although it is not in this repertoire – originally written a cappella – that the ensemble is most unique: here , they sound like any (good) a cappella ensemble. About the pieces that can be found only on this disc, I’m not sure that the inclusion of their only recording of the Beatles’ “Here, There and Everywhere”,  Mark Williams’ arrangement of Handel’s Hornpipe and first movement of Vivaldi’s Spring, and the traditional Sakura, makes the disc entirely indispensable. Overall the recital is entertaining, as always with the ensemble, but (as often with the ensemble) frustratingly short. With all that said, now that I have it, I’m keeping it.