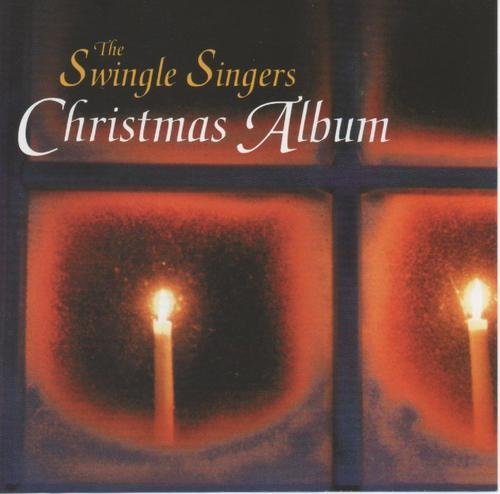 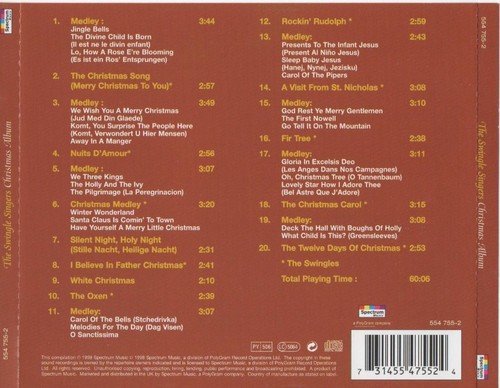 If you are a fan of the Swingle Singers and/or of A Cappella Christmas songs, this is IMPORTANT. The listing of this entry on Amazon.uk was so unspecific – no cover photo, no track listing, just “Swingle Singers Xmas Collectn” and the label Spectrum – that I thought it was a reissue of The Story of Christmas (link will open new tab to entry on discogs.com), the ensemble’s 1994 Christmas album first published on their own label, Swing CD 8 and reissued on Primarily A Cappella 6250. Since I am a fan of the Swingle Singers (rather than of Christmas songs) and didn’t have this album and this entry sold cheaper than the other ones, I decided to go for it.

LP POLD Polydor 5206: by then they were a new ensemble, based in London, and called “The Swingles”. Founder Ward Swingle had stepped down from singing, although he still acted as arranger and adviser.

Now why this is important is that even the great Swingle Singers discography, by Thomas Cunniffe from Jazzhistoryonline, didn’t know about this partial reissue. There was a subsequent partial reissue of some of the tracks from Polydor’s “Christmas”, on the Swingle Singer’s own label, Swing CD 3, in 1987, but with an amount of re-recording because of changes in the ensemble’s individual members (for the details of that complicated story go to Cunniffe’s online discography), and anyway even that Swing CD is very hard to find and rarely comes up for sale.

Other than that discographer’s concern, arguably of limited interest musically, the importance of this CD is not only that it reissues recordings of the Swingle Singers that were otherwise unavailable, but also offers 61 minutes of Swingle Singers’ Christmas music. It is not only a much better deal than the stingy 31 minutes from the 1968 Christmastime digipak CD reissue from Universal (see my review), but it is also illustrative of the ensemble’s two subsequent styles: the songs purely “dee-dumed”, with no lyrics sung, in 1968, which was really the trademark of the unique style invented by founder Ward Swingle in his seminal 1963 Jazz Sebastian Bach album; and, by 1986, become a more “mainstream” a cappella vocal ensemble, with lyrics sung, and in some tracks an accompaniment of sleigh bells (track 8, 16), which is fine, but also of synthesizers/electric keyboards producing various sounds from sirupy strings to vibraphone, and pop music drums (tracks 2, 4) – which makes ME cringe: if I want corny pop music, I buy corny pop music, not the Swingle Singers’ Christmas albums. And I never buy corny pop music, especially on Christmas. But the purely a cappella tracks (6, 8, 10, 14, 16, 18, 20) are fine. “Rockin’ Rudolph” (track 12) starts purely a cappella and then adds piano and electric bass guitar, but then, it is sung in Gospel style, the Swingle’s imitation of a Harlem church, and is immensely fun. There is no perceptible difference of sonics between 1968 and 1986.

61 minutes hardly fills a CD, so it’s a shame that Spectrum didn’t reissue the complete contents of Polydor’s Christmas. The four missing tracks are “Sleigh Ride”, “Gaudete Gaudete”, “The Snowman” and Irving Berlin’s “White Christmas” (but the earlier version, without lyrics, from the 1968 album “Christmastime”, is there). But it’s better than nothing. Other Christmas recordings by the Swingle Singers are the 1978 “Swingle Bells” o

EMI-Columbia SCX 6603 (UK) / Moss Music Group MMG 1124 (US), a program exactly overlapping the one from “Christmastime”, but with an entirely different  (and more “pop-music”) instrumental ensemble and words sung, and (to the best of my and Jazzhistoryonline’s knowledge) never reissued on CD (see entry on discogs.com); the Swing CD/Primarily A Cappella “Story of Christmas” linked above ;  The Swingle Singers …Unwrapped (link to entry on Discogs.com), a Christmas album in all but name, from 2004, first on Swing CD 20