Back in 2014 I was having an exchange of e-mails with the great Mahler discographer, Peter Fülöp, the man who owns in one form or another every single Mahler recording that was ever made, save about six (see my review of his magisterial 2010 Mahler discography). And, because I had provided him some info about some Vanguard CD reissues, he told me about an early recording which he had seen references to, but in forty years of research had never been able to establish if it had actually ever been in existence: an early Vanguard 78rpm, for which the only indication he had was “Wunderhorn: M.Paull, K.Hieber Vanguard 3“. He asked me if I knew anything about it. Well, how was I going to know anything about it if in forty years of research the ultimate Mahler specialist has not been able to establish that this disc ever existed?

By the way Vanguard: These is an unanswered question about a Vanguard 78 rpm records:

Well, other than references in various early discographies which were not enough to establish the actual existence of the record, an hour of Internet research produced this:

Yes, I’ve got your answers, and more. There is no information that is not accessible in the age of the Internet. The recording of Mary Paull and Kenneth Hieber of “Wer hat dies’ Liedlein erdacht”, Vanguard 3, is certainly listed in the 1952 edition of World Encyclopedia of Recorded Music (WERM), as paired with Franz: Zwei welke Rosen. What puzzles me a bit is that David Hall also references that disc in The Record Book – International Edition 1948 , p. 794, but under the song “Hans und Grete”, not “Wer hat dies Liedlein…” Other Internet sources confirm “Wer hat dies Liedlein…” and say 1948: http://www.musicalconcepts.net/legacy/mahler/introduction.php [postscript April 2021: the page is gone]. So it is possible that Hall didn’t actually have the recording yet and mis-referenced it (he doesn’t specifically comment on it in his commentary).

But the proof of the existence of that recording (and its actual date of release) is provided by a review in the Morning Herald, Hagerstown, Maryland, 28 March 1947 (!!!):

So: dating 1947 and existence of the recording assured.

WERM is an invaluable source for all recordings published between 1925 and 1950, and if you don’t have it it can be downloaded free from:

In fact, looking at WERM, I see that you are missing three more

Here are two snapshots of the WERM entry (also appended). 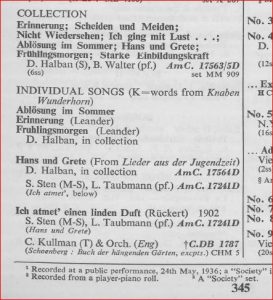 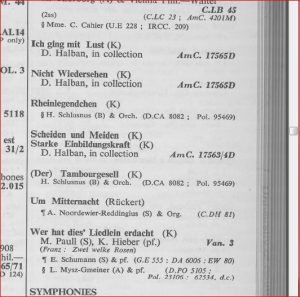 Other than the pleasure of solving a riddle that the greatest Mahler specialist on earth hadn’t been able to solve in 40 years, this little anecdote provides, I find, a telling illustration of the new research possibilities offered by the Internet. Not entirely a wonder that Fülöp hadn’t been able to solve the mystery in all his years of research. Had the question been asked to me in the “ante-internetum” era, it would have been impossible to find the answer. I would never had access to the US libraries where I should have spent hours and hours of research through the fine print of the specialized press in the hope of finding a reference to the recording; had I had access to the libraries, it would not even have been worth the effort to spend those hours, hundreds and maybe thousands, leafing through page after page, and just for one song of Mahler on an obscure 78rpm disc; and even if it had been important enough to do so (it wasn’t), nobody would have ever thought to look, of all places, in the Morning Herald of Hagerstown, Maryland. And I have many other similar anecdotes of the findings that the Internet makes possible. In many such cases, I’ve often reflected: “how would I have found that info before the invention of the Internet?” And the answer is always: “I wouldn’t even have started searching”.

But the anecdote also goes some way in explaining a riddle that makes many economists of today scratch their head: the internet, a major technological breakthrough, does not translate, unlike earlier scientific and technical revolutions, into noticeable productivity growth. In the case of this little anecdote, it is obvious why: the internet hasn’t enabled me to find faster the answer to a riddle that I would have taken longer to solve in the pre-internet era; it has encouraged me to spend time to solve the riddle, time that I wouldn’t even have begun to devote to that research before the internet. If productivity is the ratio output/time, in this case the internet translated in a huge productivity loss. And the observation can be generalized: with the internet, I find myself spending much more time doing research than I would have earlier, only because, now, it can be done.

Anyway, bless those who scanned page after page and uploaded all those issues of the Morning Herald of Hagerstown, and bless the computer geeks who made those .pdf copies searchable