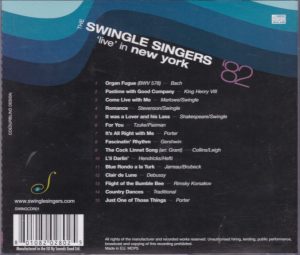 A mixture of classical, folk/traditional, pop & jazz/Broadway. Too short for its worth
Originally posted on Amazon.com, 16 April 2011, revised for republication (18 January 2019)

The Swingle Singer’s early, Paris-based years (1963-1973) are well documented on CD – almost all their albums have been reissued (and that includes a belated reissue of their seminal recording of Berio’s Sinfonia (original version in 4 movements) made for CBS with the New York Philharmonic under the conductor’s baton, from 2013), exceptions being their penultimate album, Michel Zbar’s “Swingle Novae”, half a side of an obscure Inédits de l’ORTF LP, and their last, “Bitter Ending” (how ironic!), a composition by the French jazz composer and critic André Hodeir. Their “late” period (ushered in in April 1984 with their re-recording of Berio’s Sinfonia – but now the work completed of its fifth movement – under Boulez for Erato and Ward Swingle’s last participation as a singer, but really taking off with the establishment of their own label Swing in 1989, and their Mozart album on Virgin Classics in 1991) is also abundantly documented on C, Deven if most of the albums published on the Swingle Singers’ own label Swing that were NOT licensed and reissued later by labels like Virgin, Signum or Primarily A Capella, are sometimes hard to find.

But the “middle” period, after the original, Paris-based group had disbanded and founder/arranger Ward Swingle had moved to London and re-formed a new group, called alternately Swingle II, the New Swingle Singers or The Swingles, before reinstating the name Swingle Singers, has not been well-served on CD. CBS and EMI/Moss Music Group, the two labels they principally recorded for, have not done a good job with reissues. Only the Sony CD, “Swing Sing” is a reissue of the LPs “Rags and All that Jazz” (CBS 1976, reissued complete) and “Lovin’ You: Words and Music vol. 2” (CBS 1976, 7 tracks out of 10), with two additional tracks from the six of “Words and Music” (CBS 1974) and one (the BeeGees Medley) from “No Time To Talk” (CBS 1979).

So it’s good to have this “Live 1982 in New York” CD, it helps bridge the gap between the original Swingles and the later ones from the 1990s onwards. Ward Swingle was still a member of the group (he retired in 1984, although he retained the position of musical adviser and sometimes arranger) and on the cover photo he is starting to look, well, maybe not like the grand pop’ of the rest (and the rest look like they’ve just come out of adolescence), but certainly as their dad. But it certainly isn’t something you hear, although, playing by ear (specific credits are not given), it isn’t Swingle who takes the solo part the long solo part in Stevenson’s Romance and the shorter one in Shakespeare’s song (tracks 4 & 5). Gallant of him to have let the spotlight to the youngsters. Apparently the CD was released as late as 2006 (that’s the date that also appears on the group’s own website) on the ensemble’s own label, as SwingCD R01. It was first published in the form of a self-produced cassette tape, no label number.

Other than their 1968 Christmas album (Christmastime) and their collaboration with André Hodeir, the French Swingles had more or less specialized in Classical, or Jazzified classical. Even their encounter with The Modern Jazz Quartet in “Place Vendome” was Bach-inspired. Only in their album “American Look” had they strayed in the direction of popular music, singing arrangements of Negro Spirituals, country music, patriotic songs, Stephen Foster and Gershwin. The new, London Swingles became more systematic about it, taking on the jazz standards old and new, the ragtimes, Broadway, the pop music hits of the day and famous film themes. So here, in 1982, culled from two nights, on 15th and 16th October, at the Village Gate in New York, you get a mixture of Classical, folk/traditional (“Country Dances“, track 14), pop (Judy Tzuke’s, hem… unforgettable “For You” from the 1979 album “Stay with me till Dawn“, link will open new tab to CD’s entry on discogs.com) and Jazz/Broadway: Cole Porter’s “It’s All Right With Me” (the arrangement has great verve) and “Just One of Those Things“, Gershwin’s “Fascinatin’ Rhythm” (Swingle’s brilliant arrangement for voices of the Big Band arrangement made by Bill Russo for the Stan Kenton band of the George and Ira Gershwin song, with new “vocalese” lyrics by Jon Hendricks expanding on those of Ira – no kidding!), Count Basie’s “Lil’ Darlin’” (again in Jon Hendrick’s “vocalese” lyrics, from the 1958 epoch-making album (no kidding this time) “Sing Along With Basie“, Al Jarreau’s “Blue Rondo a la Turk“, from the album “Breakin’ Away“, after a composition of Dave Brubeck. On track 9, “The Cock Linnet Song” (after the 1919 song “My Old Man” by Fred W. Leigh and Charles Collins), bass Simon Grant engages in a tour-de-force, whistling the melody and humming the accompaniment at the same time.

The Classical selections are Bach’s Fugue BWV 578 (first tackled in the soundtrack to the Italian B-series film “Operazione San Pietro“, it became one of the group’s favorite standards – I’ve located 5 different recordings of it, including the one sung with personnel entirely changed and in a denser arrangement in their Virgin Bach Hits Back CD, a song of King Henry VIII, Rimsky’s Flight of the Bumble Bee (also a favorite of theirs in those years, found also in the “Folio” and “Reflections” albums) and Debussy’s Clair de Lune, that sounds in the arrangement like it could be titled “rêverie”. There are also three original compositions of Ward Swingle, entertaining and jazzy, after poems from respectively Marlowe (“Come live with me and be my love” – and the Swingles conspicuously do NOT rime the verses “And if these pleasures may thee move / Come live with me and be my love“), Stevenson’s Romance (and a check on Google confirms that this is indeed Robert Louis) and Shakespeare’s “It was a Lover and his Lass“, and his brilliant medley of American Country Dances.

One thing in the 1982 recital that anticipates a later development in the Swingle Singers’ approach to arrangement is that, except for a piano underpinning in Porter’s “Lil’ Darlin’” and at the end of Al Jarreau’s “Blue Rondo a la Turk”, they are sung entirely a cappella. The Paris ensemble had dee-dummed the classics, underpinned by a jazz rhythmic section (double-bass and drums). The early London Swingles had replaced the jazz section by a pop accompaniment, preferring electric keyboard and bass-guitar, thereby “popsifying” the classics (to lovely results in the “Madrigals / Love Songs for Madrigals and Madriguys” album). Starting in the late 1980s they became an entirely a cappella ensemble. Not that they dispensed with the rhythmic underpinning: they now “dee-dummed” and “shu-shued” it (pushing the approach to its apex on Signum Classic’s jaw-dropping “Beauty and the Beatbox” (2007). in the 1980s they weren’t consistent about it: the live 1987 recital at Ronnie Scotts, reissued on The Compilation Album, comes with instrumental accompaniment; but the 1985 “Reflections”, also partly reissued on the same Compilation Album, is almost entirely a cappella.

Another styltistic development that was typical of the London Swingles as opposed to the Paris Swingles: lyrics of the songs are sung  In Paris, arrangements of songs (in the “Christmastime” and “American Look” albums especially) were dee-dummed. In London, other than when they tackled classical instrumental music (especially on the CBS “Baroque” album), they sung the lyrics, even adding new ones in “vocalese” style (contributed by Tony Vincent Isaacs) when they covered the piano music of Scott Joplin, Bix Beiderbecke, Jelly Roll Morton and Fats Waller in the album “Rags And All That Jazz”. In 1982 at The Village Voice, typically, only the classical pieces are (brilliantly) dee-dummed, all the others, because they are arrangements of songs or poems, are sung. However brilliant some of those arrangements and performances are, I find the Swingle Singers less original when they do that, sounding more like an fine a cappella group – something like the King’s Singers, when the King’s Singers tackle the pops – rather than like the unique Swingle Singers. Nonetheless all the arrangements display extraordinary verve, beat and swing, and the live circumstances (applause at the end of each song) make the group’s customary razor-sharp precision of pitch and ensemble all the more remarkable.