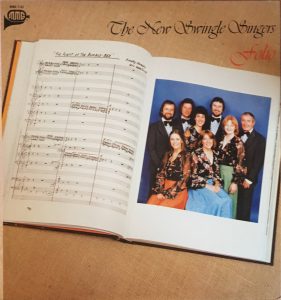 Published under the title “Swing the Classics” on Aves INT 161.532 (Germany) see Discogs.com for more details

More lovely arrangements of hits of Classical music by the Swingle Singers, another LP badly in need of CD reissue
Originally posted on Amazon.com, 21 October 2012

The record companies for which the Swingle Singers recorded in the 1970s – CBS/Columbia, RCA and EMI – have done a shamefully pitiful job at reissuing their back catalog on CD (see my comprehensive discography, Part II), and this album, Folio, which closed that period in 1980, is one of the most lamentable casualties. It was published in Europe as EMI-Columbia SCX 6631 (see entry on Discogs.com for more photos) and licensed in the US by Moss Music Group, MMG 1125 (Discogs.com), also on the German label Aves under the title “Swing the Classics” (Discogs.com). The group wasn’t anymore the original, Paris-based octet formed in 1962 by Ward Swingle (born in Mobile, Alabama). It disbanded in 1972 and Swingle reformed a new group in London with young British singers, called (depending on the labels) Swingle II (on CBS/Columbia and RCA) and The New Swingle Singers (EMI). Ten albums were released between 1974 and this one (not counting Berio’s A-Ronne, Cries of London), of which only a compilation (from the CBS releases) on one CD was reissued by Sony, “Swing Sing” (and if my ears serve dubbed directly from the LPs rather than from original tapes): see my review of the CD for the details and sources. But that wasn’t the Swingles’ most interesting repertoire either.

The changes between the Paris-based Swingles and Swingle II had been more sweeping than just one of home base. In 1962 Swingle had invented a unique approach, scatting – or rather, since nothing was improvised, “dee-duming” – instrumental music, and so (as I’ve contended in my reviews of the early Swingle Singers albums) returning instrumental music to its very essence: the human voice, elevating to the status of high art what we all do, inadvertently, casually, without thinking about it, while walking the dog, vacuuming, ironing, washing the dishes, showering: humming our favorite tunes.

But the London Swingles now embraced a new repertoire made standards of jazz, Broadway, hits of film music or the lasting or ephemeral pop music successes of the day. They also sung arrangements mainly of songs rather than instrumental music, AND now sung the lyrics as well. In the case of “Rags And All That Jazz” on CBS and the 1979 “Skyliner” (EMI-Moss Music Group), they even went a step further and did what the Hendricks-Lambert-Ross trio had brought to a state of perfection in the late 1950s and what Mimi Perrin had frenchified with her Double Six de Paris in the early 1960s (of which Swingle had briefly been a member): they devised new lyrics to emulate the sounds of what was originally purely instrumental (the so-called “vocalese”). Something new was gained of course (their album of late 15th-to-early-17th century madrigals, “Love Songs for Madrigals and Madriguys“, with a discreet pop music underpinning, is lovely, see my review), but the Swingles also lost what had made the unique originality of the Paris group. Also – sorry fans of ragtimes, Broadway and pop music – but it is doubtful that Stevie Wonder’s “You Are The Sunshine of My Life”, Gallagher & Lyle’s “I Wanna Stay With You” and even the ragtimes of Joplin offer the same abiding musical rewards as Bach’s Badinerie or Air on the G-String.

So Folio was a great album, because it returned to the Swingle Singers’ basics : dee-duming the instrumental hits of Classical music. The repertoire is great and significant, all firsts for the Swingle Singers except for Mozart’s Eine kleine Nachtmusik (already recorded – complete, here they sing only the two last movements – by the Paris Swingles in their 1965 “Swinging Mozart” album), and although some became standards often reprised by them (Rimsky-Korsakov’s Flight of the Bumble Bee, Debussy’s Clair de Lune, Mozart’s Eine kleine Nachtmusik), most others get here their only recording (Debussy’s Rêverie, Scarlatti’s Sonata, Chopin’s Prelude, Bizet’s Intermezzo, Fauré’s Pavane, Beethoven’s To Elise, Saint-Saens’ The Swan).

The arrangements are great too, from lovely (Debussy, Bizet, Fauré) to dazzling (Rimsky, Chopin, Beethoven). Exclusive classical music fans (I am) more intolerant than I am might raise an eyebrow at the pop music instrumental accompaniment. I think it works perfectly well. As with the original Swingle Singers jazzifying of Bach (which, I contended, was less about jazzifying Bach than bringing out the inherent jazziness of Bach), it draws interesting and unsuspected links between Classical music and pop: Flight of The Bumble Bee with pop rhythmic accompaniment makes it sound as if it could be music written by Henry Mancini for “Peter Gunn” or Lalo Shifrin for “Mission: impossible”. Beethoven’s Für Elise should have been a hit for a teen-age pop group. Debussy’s Rêverie with pop drums bass guitar and vibraphone becomes cocktail lounge music (well… if music so lovely was played in cocktail lounge patrons would stop talking and start listening, and the group would be fired). The Sonata of Scarlatti is turned into dance music. Debussy’s Clair de Lune and La Fille aux Cheveux de Lin are purely A Cappella.

Small detail: there is something bizarre in one of the soprano’s voice in Bizet at 1:34 and again in Fauré at 1:33 (my transfers to mp3), making it sound almost like a music saw, can’t tell if it is an effect of the recording, or because she’s humming at a very high pitch with mouth closed and it distorts her voice. It is likely to bother only the punctilious exclusive Classical music loves referred to above.

Note also that the arrangements are shared between Ward Swingle and an arranger called “F. Demorest”. Swingle’s wife was violinist Françoise Demorest.

As with all the Swingle Singers’ LPs (and many of their CDs too!), the TT is frustratingly short (34 minutes), because with such good stuff you never want it to stop. It took me longer to write this review – not that it bothered me to listen again. I don’t understand how this album didn’t make it back then into the pop charts. It must have been badly marketed. Hope the ignorant and Alzheimer-stricken executives at EMI wake up and realize that the 50th anniversary of the Swingle Singers’ first album comes up next year, and finally do what they got to do: reissue this album, and pair it with the other one they have on their catalog, Skyliner (see link above), the Swingle’s homage to big band jazz.