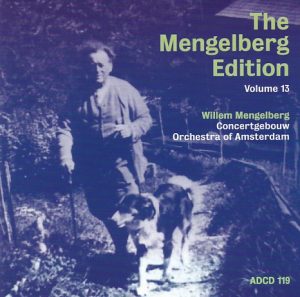 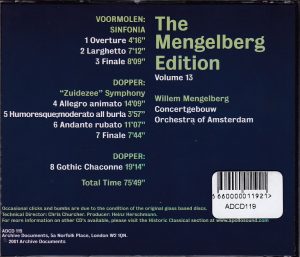 For fans of historical recordings and great conductors of the past, any recorded testimony of Mengelberg is invaluable, any recorded testimony of Mengelberg in “contemporary” (from his time) music is even more (and among those, the recording of the world premiere of Bartok’s Violin Concerto with Szoltan Szekely in 1939 is a treasure deserving to be kept in Fort Knox), and any recorded testimony of Mengelberg in obscure Dutch music of his time is not just invaluable but invaluably rare. Among those for which we have recordings, very few have stepped above the status of local glories (and even then, only with connoisseurs of the off-the-beaten track): Julius Röntgen (1855-1932) and Johan Wagenaar (1862-1941) might qualify (the latter, thanks to the advocacy of Riccardo Chailly when he was one of the successors of Mengelberg at the helm of the Amsterdam Concertgebouw Orchestra), and maybe also Hendrik Andriessen, although he seems to be now much overshadowed by his son Louis. Speaking of Chailly’s advocacy of local Dutch composers, one is surprised not to find any Diepenbrock in Mengelberg’s live discography. Only the fortunes and misfortunes of live recordings and their preservation: a check on the Concertgebouw Orchestra’s great online archive, shows that, from 1899 to 1942, Mengelberg conducted 84 concerts with compositions of Diepenbrock, and that he performed most of his works for orchestra, with or without voice.

But Cornelis Dopper (1870-1939), Rudolf Mengelberg (1892-1959) – Willem’s nephew (or grand nephew, sources differ), and a composer, musicologist, and for a while chief executive of the Concertgebouw – or Alexander Voormolen (1895-1980) are now rather forgotten, even in their own country (even though Chandos made a bid at the rediscovery of Dopper and Voormolen in the early years of the third millennium, see my review of their Voormolen CD), making this release on Archive Documents’ Mengelberg Edition all the more welcome, and a valuable complement to Teldec’s similar release of studio recordings of “Niederlänsische Komponisten” in their Mengelberg Edition, sharing only Dopper’s Ciaconna.

From old copies of the Mengelberg Society’s Newsletter (#23) found online, it appears that the two live recordings here probably derive from a broadcast given by the Dutch radio AVRO on July 17, 1976. They were originally released on LP by Past Masters:

“I suppose that PM-l6 owes to the Mengelberg series that AVRO broadcast in July, 1976 (NEWSLETTER, #18). Although not as good as that of the Philips/Beethoven set, the sound is enjoyably adequate& of a generally wide dynamic range. (…)
LEO MACK (PAST MASTERS). “. . . you might be happy to learn that we are sending a copy of PM.16 to Alexander Voormolen . . . Miss Heemskerk will also receive a copy.” Miss Heemskerk, who is the principal of.the Mengelberg Foundation, Amsterdam, played 1st violin in the COA under M. for about 4 decades, & was a close friend of the Mengelbergs.”

The sonics are acceptable given the vintage and sources – these were preserved on glass-derived acetates back then, so do expect your share of cracks and blops –, better in the Dopper Symphony than in Voormolen’s Sinfonia, where the two channels sound artificially unbalanced. But still, this may not be the best way to form an opinion about the works’ worth. Alexander Voormolen was a composition student of Ravel and Roussel and said that he found Roussel’s music more “universal”, but his Sinfonia seems confirms the impression derived from the Chandos CD: light-hearted and fluffy in the lighter and fluffier style of Auric or Sauguet rather than Roussel in the two framing movements, surrounding a Larghetto in a romantic and lyrical vein that sounds under the dual influence of Franck and Bruckner. There’s a slow, brooding introduction in the first movement (which recurs halfway through) which tends to show that Voormolen was capable of something else, but it seems to be a streak that he didn’t pursue very much.

Cornelis Dopper was made infamously famous for being the target of the sneers of his “colleague” and more avant-garde Matthijs Vermeulen after a performance in 1918 of the same 7th Symphony that his featured here, who shouted “long live Sousa!”, with the implication, of course, that Dopper’s music wasn’t any better than Sousa’s marches (which at least goes on to show that the latter were well known in early 20th century Netherlands).

This may be explained by the second movement, “Humoresque”, which sounds like a hodge-podge of salon-like Kreisler in symphonic form, square dance, neo-Baroque music that you may have heard in a film shot 20 or 30 years later, all rising to a loud coda in the form of an orchestral bacchanale. The first movement is also hard to pinpoint, it seems to shoot in many directions, some heroic-bombastic in a manner that seems to point to both Strauss and the same kind of film music as the Humoreske, some very heart-on-sleeve romantic, and it sounds long-drawn, but it shows also an apparent freedom of form that’s not exactly backward-looking. But it’s very unfair for the Andante, a beautiful movement in late-romantic style. There are many fine things in the Finale, including fugal movements introduced by timpani, and it ends in a grandiose boisterousness which I find way more ambitious than a march of Sousa. And what you can say in favor of Dopper is that his Symphony doesn’t sound less advanced than Voormolen’s Sinfonia from more than 20 years later.

But it’s the Gothic Chaconne, Ciaconna Gotica, from 1920, that’s the truly great piece here, and it’s no surprise that it was Dopper’s most popular piece. Starting in a brooding and somber atmosphere that recalls Vaughan Williams’ Tallis Fantasia, it traverses many moods, always with great orchestral invention, all those more so as it obsessively varies, in the course of its nearly 20 minutes, a very simple theme. The score is available online from the International Music Scores Library Project (link will open a .pdf document in a new tab).

That said, these works call for stereo – and indeed, the two Dopper pieces have been recorded, by Kees Bakels and the Netherlands Radio Symphony Orchestra on NM Classics 92060, paired with Peter Van Anrooy’s Piet Hein Rhapsodie (1995), barcode 8713309920604. This Archive Documents document is more for the fans of Mengelberg.

The label may be thanked for bringing back this rare material from Mengelberg, but Archive Documents aren’t helpful by not providing the recording dates. The only indication they give is that the Voormolen Sinfonia is its world premiere, which, thanks to the great online archive of the Concertgebouw Orchestra, permits to date it from 31 October 1940. Mengelberg gave two performances of Dopper’s Symphony on 8 and 22 December 1940, both in Amsterdam, and it must be the first that is given here, since it resurfaced with that dating in a semi-private edition on CD-R. Mengelberg gave a number of performances of the Ciaconna between 1938 and 1942, and one of them at least must have been recorded, since the Dvorak Violin Concerto with Maria Neuss from the same concert (25 March 1943) has been widely circulated, but this one appears to be the studio recording he made for Telefunken on 9 or 12 (sources differ) April 1940, and that is also on the Teldec CD mentioned above. The sonics of Archive Documents are more tubby than those of Teldec. TT 75 minutes, no complaint here.