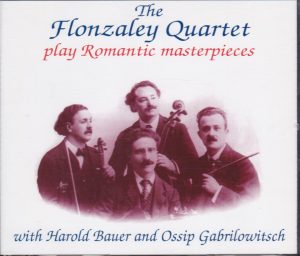 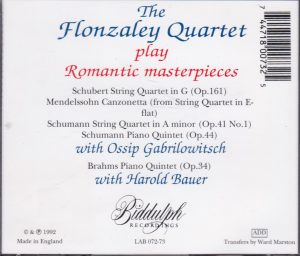 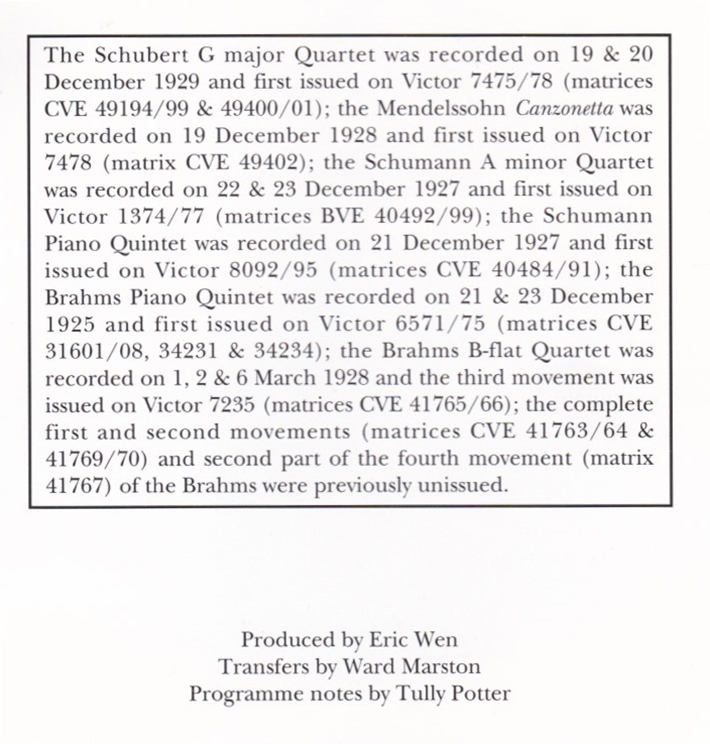 To me the most outstanding item in thi valuable set (in excellent sound, with great instrumental clarity) is the Schumann piano quintet with Ossip Gabrilowitsch. It has a forward momentum that no other subsequent version that I know (Serkin-Budapest, Rubinstein-Guarneri, Bernstein-Juilliard, Entremont-Berg, Zacharias-Cherubini among them) even approaches. In the first movement the Flonzaley’s initial tempo is brisk, and moreover, unlike all the others I mentioned, they never slam the breaks and linger when the lyrical second theme comes in and where Schumann doesn’t instruct to do so. These people had understood a lesson that seems to have been forgotten since : the lyricism of a musical phrase should be expressed and will be all the more poignant within a given (and rather swift) tempo, and not by slowing down, coaxing the phrase and trying to rub it in (Bernstein, alas, is the worst in that respect, though his scherzo has a fabulous drive). The “funeral march” has all the wanted weight and the scherzo and finale again display the same kind of forward drive – all of which also makes me wonder what Leslie Gerber hears that he qualifies “gently romantic”. This is rather “passionately romantic”.

The Brahms quintet (with Harold Bauer) is good also, though not nearly as good and (especially in the finale) as profound as the Serkin-Bush from a few years later. As for the rest -Schumann’s first, Brahms’ third (shorn of most of its finale) and Schubert 15th quartets (the latter heavily cut, except in the Scherzo, but it is stylishly done, so that without the score and/or good knowledge of the music you won’t notice it, except perhaps in the finale where the conflations are more awkward) – be prepared for an interpretive style that, at times, sounds its age: often plangent tone and some expressive devices that sound “old-time”, some degree of portamento, “gemütlichkeit” rather than drama. In the original version of this review I wrote that Schubert’s Quartet suffered the most from that approach. Returning to it some years later (2012), after listening to the subsequent but still early recordings of the Kolisch Quartet (1934) and Busch Quartet (1938), I don’t find so. Sure there are some expressive turns that sound passé (like the big slow-down on the first movement’s second subject at 2:01 and the pedestrian gait adopted there), but overall and outside a few spots I find the Flonzaleys remarkably up to the composition’s drama and pathos, and sometimes (as the central trio in the Scherzo) less “old-world” expressively than the Kolisch and Busch Quartets, remarkably “straight” and not trying to milk the sentimentality.

Biddulph deserves be thanked for bringing back these historical interpretations to our attention.