I was first alterted to the existence of an early recording of Honegger’s Pacific 231 by a short mention in the composer’s biography by Harry Halbreich (original French edition Editions Fayard 1992, barcode 9782213028378, page 117). The mention, based on the composer’s own diary, came in the chronological survey of the year 1925, but it was very puzzling. Halbreich just writes “on the 18th [that’s February], Pacific 231 is recorded on disc“, and doesn’t give any other indication: performers, label…. He couldn’t have been referring to the composer’s own recording on Odéon, because that one dates (depending on the sources) from 1929 or 1930 (see my review of Music & Arts’ edition on CD-767, with links to other reissues), nor to the earlier one made under the direction of Piero Coppola (15 November 1927, see my review of the reissue on Dante Lys 373).

Yet these are the only two recordings that are mentioned in the World Encyclopedia of Recorded Music (WERM). Not entirely probative however: since WERM documented only the electrical recordings, Halbreich’s mystery Pacific could have been an early acoustic recording. That I found no mention of it in the earlier biographies and discographies of Honegger that I was able to consult wasn’t determining either. Even in the early 1950s biographers and discographers were likely to have forgotten, or not be interested in, a historical acoustic recording of Pacific. I left the mystery unsolved, even doubting Halbreich’s claim and the existence of that recording. 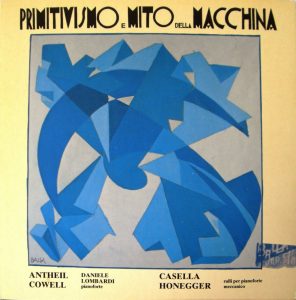 It’s only when I looked more closely at the contents of an Italian LP from 1986, “Primitivismo e Mito della Macchina” , EDI PAN PRC S20-34 , that I chanced again on that mystery recording and understood why I wasn’t finding any mention of it: it wasn’t even an acoustic recording, but a piano roll, Pleyela PM C.A. 12 ! (the Pleyela was a player-piano/pianola, see this Wikipedia entry; the LP – not issued on CD unfortunately – contains that, plus rolls of Alfredo Casella and modern performances of piano works of Antheil and Cowell by composer-pianist Daniele Lombardi). But I still didn’t know for sure who performed: likely to have been the composer himself, but at that point I had no certainty. 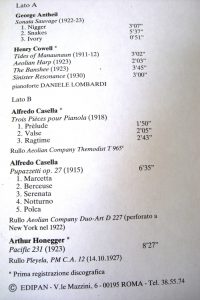 There was also a detail that didn’t stick: on the LP the recording is ascribed to 14 October 1927, which a. seems very late for a piano roll and b. doesn’t conform to Halbreich’s mention.

So I got in touch with the person mentioned in the liner notes as the owner of that roll, Mr Antonio Latanza, former head of the National Museum of Musical Instruments in Rome (fortunately he had a Facebook account!), and through his auspices with Mr Pietro Zappalà of the Department of Musicology of the Pavia University in Cremona (more about its collections here), who kindly provided the requested information. I’ll share it here.

“Although we have still to process a part of Latanza’s legacy of piano rolls, I was able to find out today the desided roll. It is a Pleyela, produced by the EMP company (Edition Musicale Perforée). 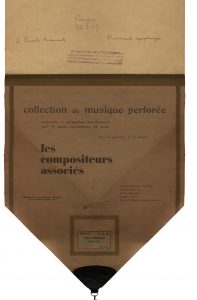 On the label of the roll (I attach here a reproduction of the beginning of the roll), besides the author and the title, on the right edge below there is also “par l’Auteur”, which should mean that the roll has been perforated by Honegger himself. I am not specialist of Pleyela or EMP rolls, but it seems to be not a reproducing roll, but a metronomic one [i.e. done simply by calculating mathematically the position and the size of the holes], which should exclude the idea of a direct performance by any pianist, included Honegger. If it is true (but I am not competent and can’t assure), the “par l’Auteur” could imply that Honegger supervised the perforation of the master roll.

Again I can’t be sure about the recording/releasing date of the roll, both because I am not such a specialist, and also because in our library we miss specific literature on Pleyela and EMP. Nevertheless at the very end of the roll (see attached image) I see clearly the date of 1923 (“Paris-Winterthur-Zürich 1923”), which could be – and probably is – only a statement about the date of creation of the musical work. But on the opposite side of the roll there is a date, done with a rubber stamp, which can easily be read by mirroring the image: “27 OCT 1927″. In my – very little – experience with Italian rolls, that date should be the release date for the single item of the roll (our item in this case), which doesn’t exclude that the title in itself could have been first published even earlier (but surely not later than 14.10.1927)”.

So this is what I know as of now of this very first and very special recording of Pacific 231. Not “recorded on disc” as Halbreich claimed, but on perforated roll… Possibly not actually “performed” by Honegger, but at least…. “manufactured” under his supervision.  And probably done, as Halbreich claimed, in February 1925, with Mr Latanza’s particular copy issued in October 1927… To make sure of that last point I’d need to go the the French National Library and consult their old copies of “Revue Pleyel“, which was published between 1923 and 1927, and hopefully carried adds for the company’s Pleyela rolls (for more on Revue Pleyel, see here). Well, I’ll keep that for later.

And now, thanks again to Professor Zappalà and much gratitude to him, here is a special bonus: he’s been able, with no player piano but using only scanning and software conversion (and credits are due here, “scanner and conversion software provided by the technicians of the AMMI-lab [https://sites.google.com/view/ammi-lab/home], the technical laboratory of the AMMI Association [http://www.ammi-italia.com/]“), to numerize the Pleyela Piano roll as an mp3 file… and here it is, for the Honeggerite’s enjoyment.