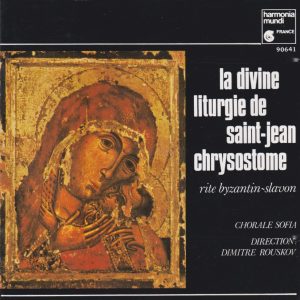 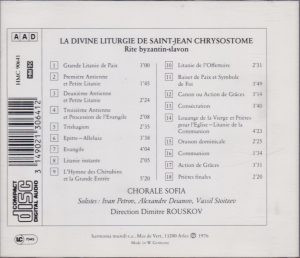 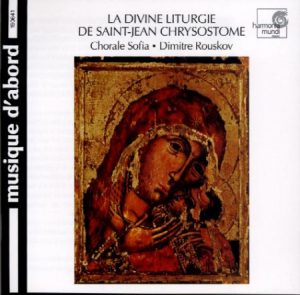 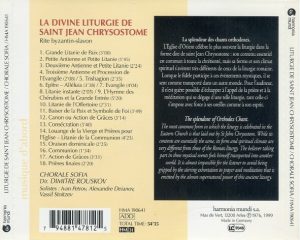 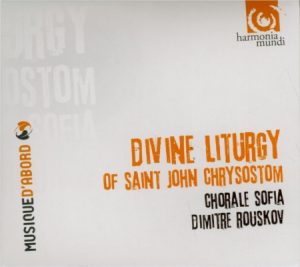 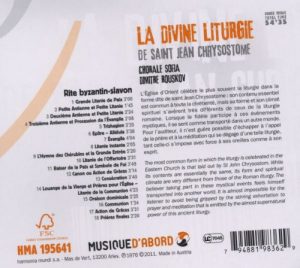 As a totally NON-specialist, or even connoisseur, of Orthodox chant, I’m not sure how to review this CD. I was working on a discography of the early CD releases of Harmonia Mundi and chanced on this one, it sold cheap, I thought I’d try it. The Divine Liturgy of Saint John Chrysostom is, gratitude to Wikipedia the fount of universal knowledge two clicks away, “the most celebrated Divine Liturgy in the Byzantine Rite. It is named after the anaphora with the same name which is its core part and it is attributed to Saint John Chrysostom, Archbishop of Constantinople in the 5th century.” To my ears, it is the orthodox equivalent of Gregorian chant – a capella psalmodies on limited interval leaps, oftentimes simple minor seconds, up, back down, back up, back down – with the men’s voice in simple but sensuous harmonic gatherings, led by your typical Slavic basso profundo (and, here, not just any anonymous Bulgarian chorister: no less than Ivan Petrov) . Sometimes, rarely, it is more elaborate melodically than that, as in the “Laud to the Virgin” (track 14) or the Sunday Orison (track 15). The Chorale Sofia, recorded in 1975, sounds as good as I can imagine. On iTunes, the Choir is credited as “the Benedictine Monks Of Chevetogne/Chorale Sofia”. Those Benedictine Monks appear nowhere on the CD itself, so I don’t know where iTunes got that from. Checking on it, it looks very much like fake news. Thanks Wikipedia again, “Chevetogne Abbey, also known as the Monastery of the Holy Cross, is a Roman Catholic Benedictine monastery dedicated to Christian unity located in the Belgian village of Chevetogne in the municipality of Ciney, province of Namur, halfway between Brussels and Luxembourg. Currently, the monastery has 27 monks.” Checking further, I know where the conflation comes from. Harmonia Mundi has another recording of “Chants of the Slavonie Liturgy”, sung by the Choir of the Monks of Chevetogne, that I don’t think was ever published on their flagship series but came out directly on “Musique d’abord” in 1988, 190567, barcode 3149025038203. It was reissued in a 4-CD set, “Liturgies orthodoxes”, HMA 290601.04, barcode 3149025045737, in 1990, together with the St. John’s Liturgy and two others of the same ilk. Benedictine monks chanting Orthodox liturgy, isn’t that cause for excommunication? 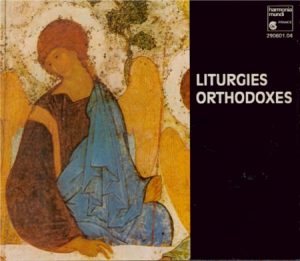 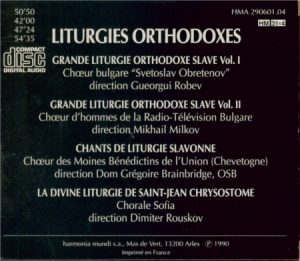 There’s a measure of background hum that you hear mainly when the voices become silent, and it sounds more like church ambiance than tape hiss. TT 55 minutes, the original CD edition came with no texts (and I don’t suppose the budget reissue has them either – in fact, I know it doesn’t, because that edition is well documented on Discogs.com), which is a major letdown. There’s more variety and fun in the recordings of Russian popular songs by the Jaroff Don Cossacq’s Choir on DG – but obviously you don’t go to the Alexander Nevsky Orthodox Cathedral in Sofia to participate in the Divine Liturgy of Saint John Chrysostom, for fun.