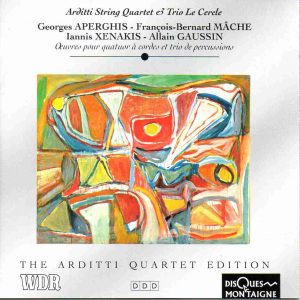 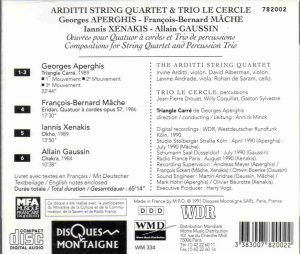 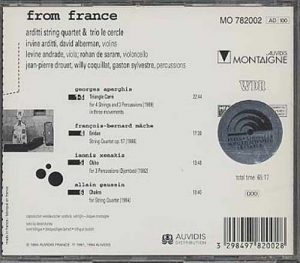 From the disc’s cover you’d think this was a CD of contemporary French (including two Greeks established in France, Iannis Xenakis and Georges Aperghis) string quartets played by the Arditti String Quartet, but it’s not so simple: the compositions of François-Bernard Mâche and Allain Gaussin are that indeed, but “Triangle Carré” (Square Triangle) of Aperghis is in fact a Septet for string quartet and percussion trio, and Xenakis’ Okho is a piece for percussion alone. Trio Le Cercle, founded in 1974, is comprised of Jean-Pierre Drouet (noted French percussionist and, with Sylvio Gualda, one of the great champions of the percussion music of Xenakis, and also a frequent collaborator in the music theatre of Aperghis), Gaston Sylvestre (also a frequent collaborator of Aperghis) and Willy Coquillat.

Xenakis’ Okho is written for three djembes, the West-African, hand-struck goblet drum. It is surprisingly simple in its pulse for a Xenakis piece, and plays more on the limited variety of timbres resulting from different kinds of attacks. Although the rhythms within the pulse progressively become more complex, that very regularity evokes the kind of “primitivist” style that was in vogue in some circles in the 1920s.

All the three other works for or with string quartet are typical of the European non-serialist avant-garde of the late 20th century, compositions interested not in melody but in the exploration of sound and sonic effects, and even, with Aperghis (one of the main figures in French and European Music Theatre / Théâtre Musical), in theatrics. His “Triangle Carré”, written in 1989 and the longest piece on the CD, explores the confrontations and conciliations between the two ensembles, the “Square” (or string quartet) and the “Triangle” or percussion trio. Whether, as the liner notes describe, the “Triangle” is supposed to be aggressively dominating and the string quartet cowered into submission, or the two groups working in tandem as in the third movement, what I hear are many sonic effects – some of them very funny, wich is a trademark of Aperghis’ Music Theatre, as at 1:40 track 1, where someone seems to be avidly chewing like a dog on some piece of leather or cardboard – and the description of the piece in the liner notes doesn’t really contradict the aural impression. The second movement has the three percussions shout or mumble jibberish over short, aggressive or hushed interjections of the string quartet, and the effect is continued in the next movement, together with more ritualistic chanting but always on mere phonemes with no meaning, over, predominantly, very hushed, distant and mysterious sounds from both the string quartet and percussion ensemble. There is a certain fascination to be derived from that collection of sounds and effect, but wouldn’t blame the haters of the avant-garde who’d find it all totally senseless, a wanton collection of noises rather than music. Aperghis is more accessible and appealing when he uses the voice (see my reviews of Récitations for solo voice and Sextuor – L’Origine Des Espèces).

François-Bernard Mâche, a founder with Pierre Schaeffer of the Groupe de Recherches Musicales (the electronic studio of the French public radio) and one of the pioneers of mixing acoustic instruments and tape is, in my opinion, one of the most original French composers and one who doesn’t enjoy the public recognition he deserves (although he’s certainly had his share of commissions and official honors in France), maybe because he is an independent, one who never subjected to the iron rule of Boulez’ serialism and post-serialism. He’s also an ethno-musicologist, and one of the most fascinating sides of his production is when he models his music on the electronically distorted phonemes of the spoken voice, as, for instance, in Kengir for voice and sampler (see my review of François-Bernard Mâche: Kengir – Phénix – Brûlis – Figures – Aulodie, link to be added). It’s an aspect of his output that links him to Aperghis.

Eridan is part of a cycle of four pieces all bearing the names of one of the underground rivers to inferno in Greek mythology, two being for piano-8 hands (Styx and Léthé, great pieces, see my reviews of Dutch Pianists’ Quartet: Works for Two Pianos Eight Hands and Mâche: Music for Pianos / Ohana: Soron-Ngo, links soon to be posted), and one piano and percussion, Achéron, yet unrecorded. Eridan is supposed to be the stylized transpositionof specific birdsongs, but you don’t really hear it. It has moments of great violence and agitation, jagged and aggressive, it is filled with sonic effects, rains of pizzicati, strings glissandi sometimes playing on hushed harmonics, bows striking the strings, yelps. However fascinating each effect, as a whole it may dangerously sound, though, like a series of disjunct episodes just pasted together.

Allain Gaussin is the most obscure of the four composers gathered on the disc, yet it is his quartet, Chakra, from 1984, that I prefer. As the liner notes put it, it is a composition that “expresses one of the fundamental preoccupations of today’s music [when did “today” turn into “yesterday”? With my first white hair, I guess…]: the exploration of sound material itself, which it does by employing seldom used or new modes of playing”.

So, as in Mâche’s Eridan, you can expect all that those who hate the avant-garde hate in the avant-garde:”ugly” sounds, non-melody, strings screeching undee the bows, rains of explosive pizzicatti, moments of pounding aggressiveness, diverging glissandi. It all sounds immensely atmospheric, hugely powerful, almost frightening at times.