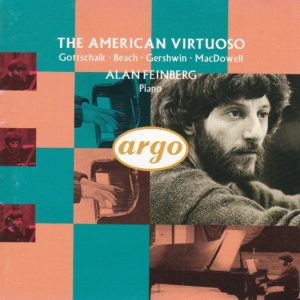 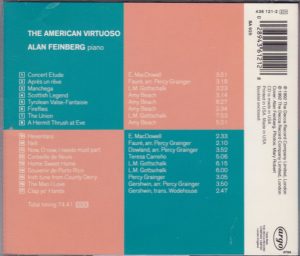 This disc was the second in a series of four recorded by Alan Feinberg for Argo in the early 1990s, the three other instalments being “The American Romantic” (Argo 430 330-2, 1990), “The American Innovator” (436 925-2, 1993) and Fascinatin’ Rhythm (444 457-2, 1995). My great enjoyment of “The American Innovator” (see my review) led me to buy this one – although I must confess that the cheap prices demanded for it on my customary online shop were a decisive incentive as well. Well, I do not regret having not paid much for it, as I do not find it as rewarding as the one devoted to 20th century music.

The liner notes, based on an interview with Feinberg, try to make a case for these pieces and contend that there is more to them than what meets the ear, e.g. more than being just derivative virtuoso trifles written by American Romantics. Feinberg sets much store on the Grainger transcriptions, calling them “the most sophisticated notational accounting I’ve ever seen of late-romantic musical style“, “almost look[ing] like complicated serial music, with each pitch having a different dynamic, each measure a different metronome mark, along with explicitly -defined rubatos and complex pedaling instructions“. Well, if things are as Feinberg puts them (but I suspect he is ovestating the case a bit), then lots of work went in for unremarkable results: Grainger’s transcription sound like good salon trifles, the kind of which might be played in the parlor or the tea room without interrupting the conversations, and the same may be said of much of the material presented on the disc. Overall, the music is in the style of Chopin, Liszt, Mendelssohn and Grieg – but without these composers twists and turns of phrase that make them unmistakably unique. Pace the liner notes, “derivative” is the word.

Still, if you don’t exaggerate the works’ value, some of them are enjoyable. Gottschalk‘s pieces in particular are fun. The Union starts in the style of a Liszt Etude then goes on as a series of Lisztian variations on “The Union” and other military songs. The Variations on “Home, Sweet Home” have a moving, homely wistfulness – emerging through an awful lot of notes. “Manchega” is a boisterous and merry moto perpetuo that will lift you out of your seat – Alkan comes to mind. “Souvenir de Puerto Rico” has a jazzy South-American bounce. Not surprisingly, these last two pieces are (with the Gershwin transcriptions) those that stray most from the European models. MacDowell‘s Hexentanz and Amy Beach‘s Fireflies are two dazzling and evocative etudes in the style of Liszt and Chopin, except that Beach’s really sounds as if she had plagiarized Chopin’s Etude op 25/6 (and I haven’t done a thorough research to find which Liszt Etude MacDowell had plagiarized). Beach’s “Hermit Trush at Eve” is a fascinating, atmospheric tone poem full of impressionist piano ripples.

Still, I won’t rush to buy the third pendant of this triptych, The American Romantic.

Note that there is another edition of this same disc, Argo D 101530. Judging from the companion CD “Fascinatin’ Rhythm”, in which a similar edition exists that is the one that I happen to have, it must be a promotional edition, with no barcode. I haven’t found a backcover photo online.