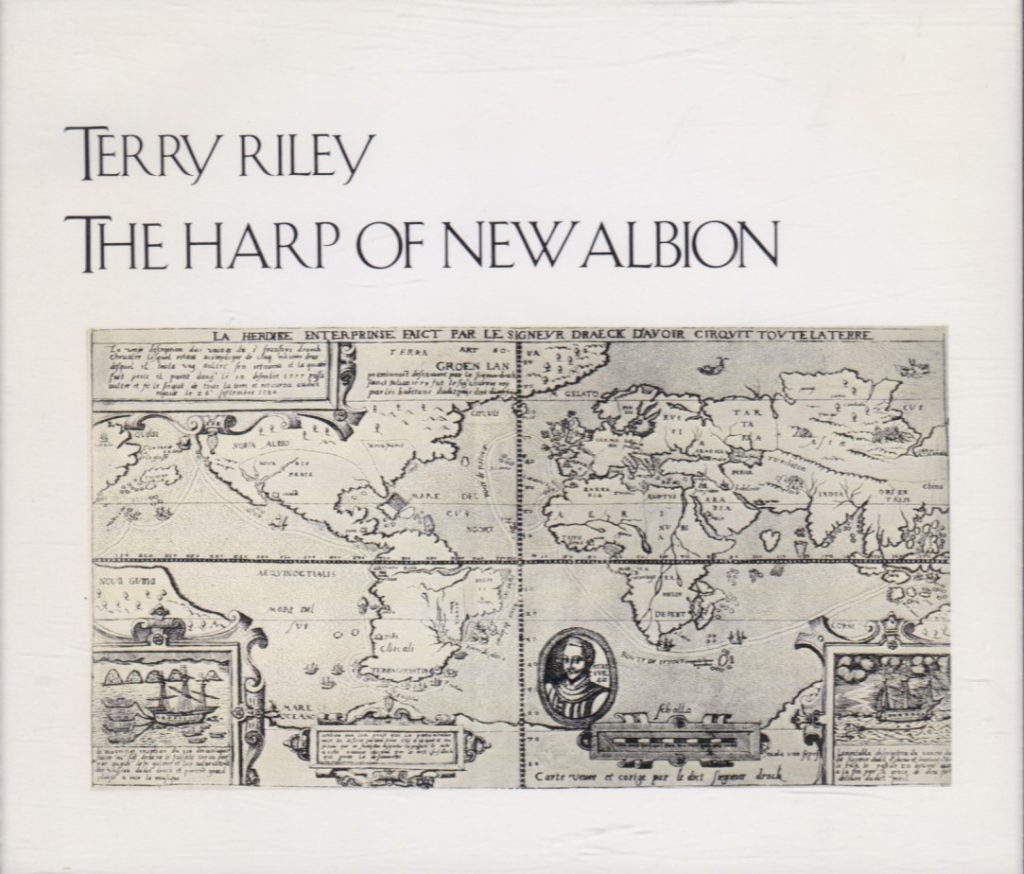 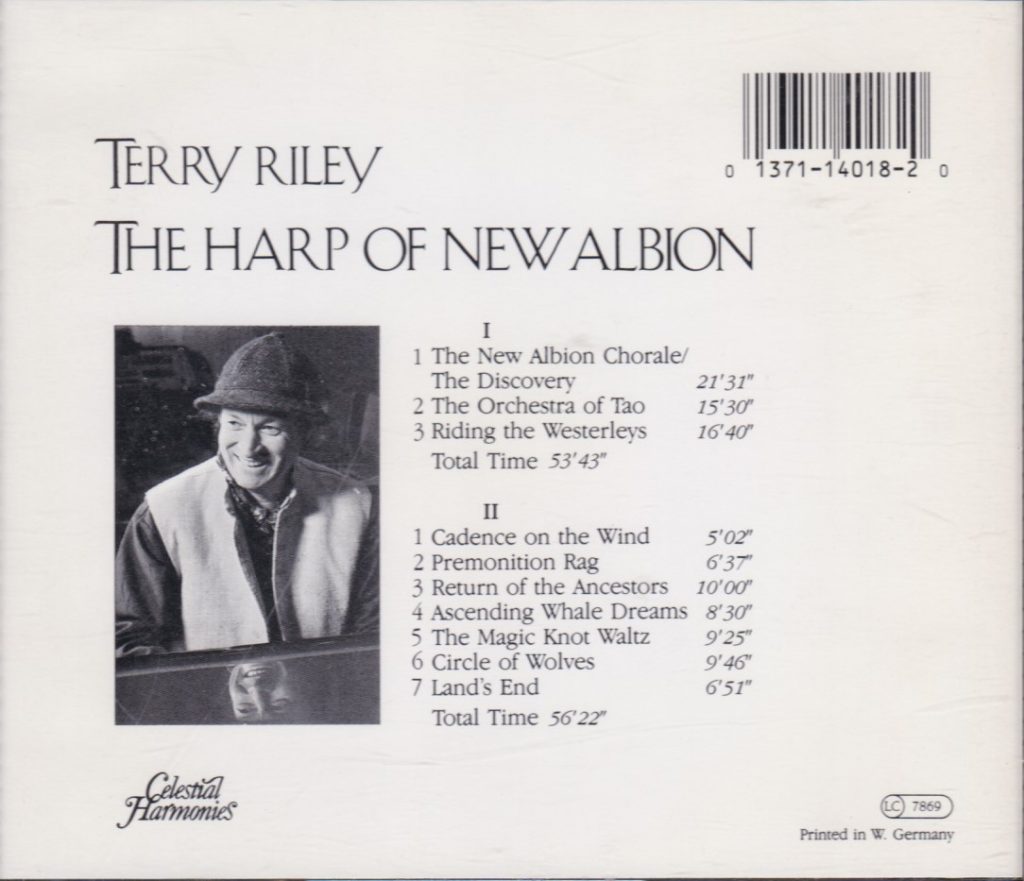 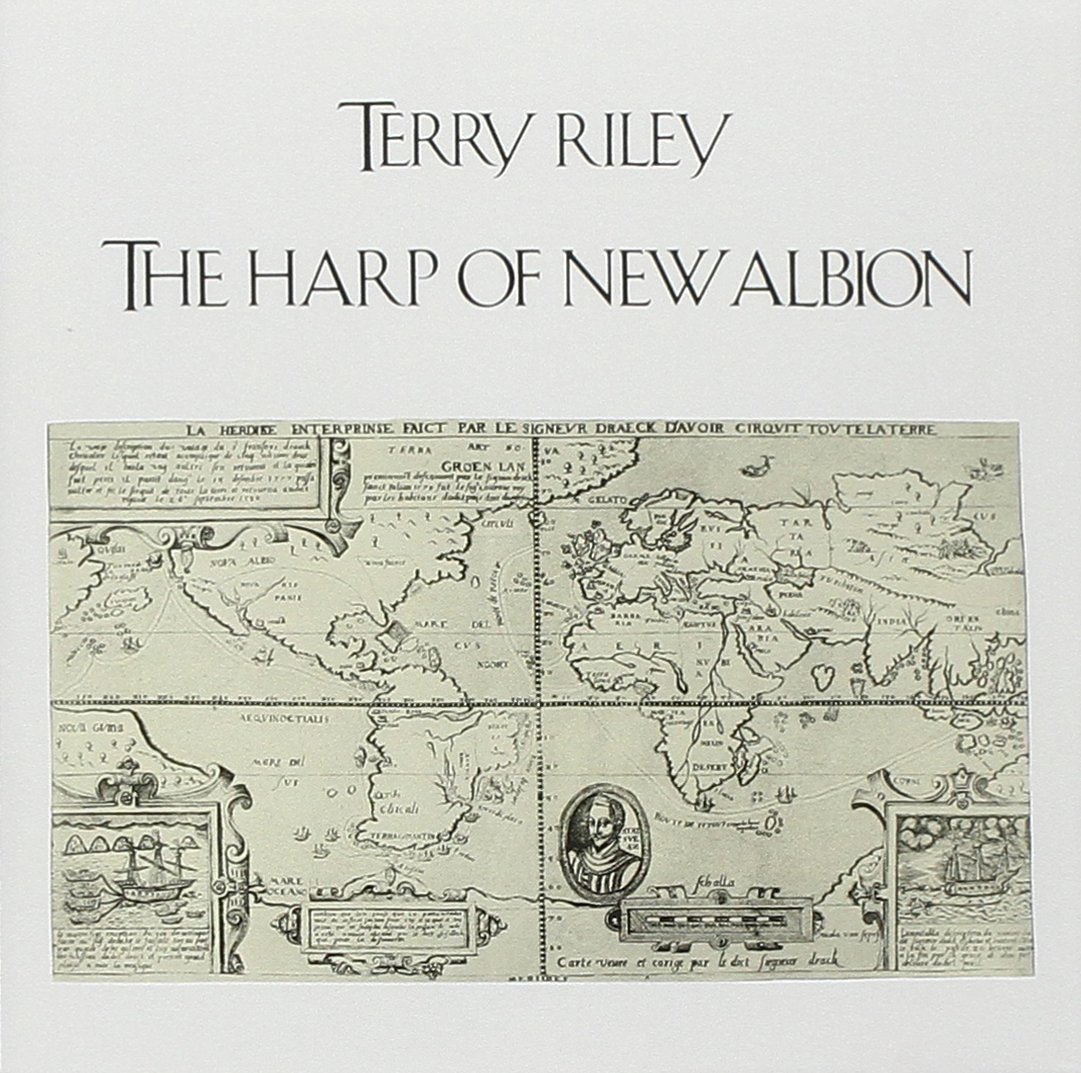 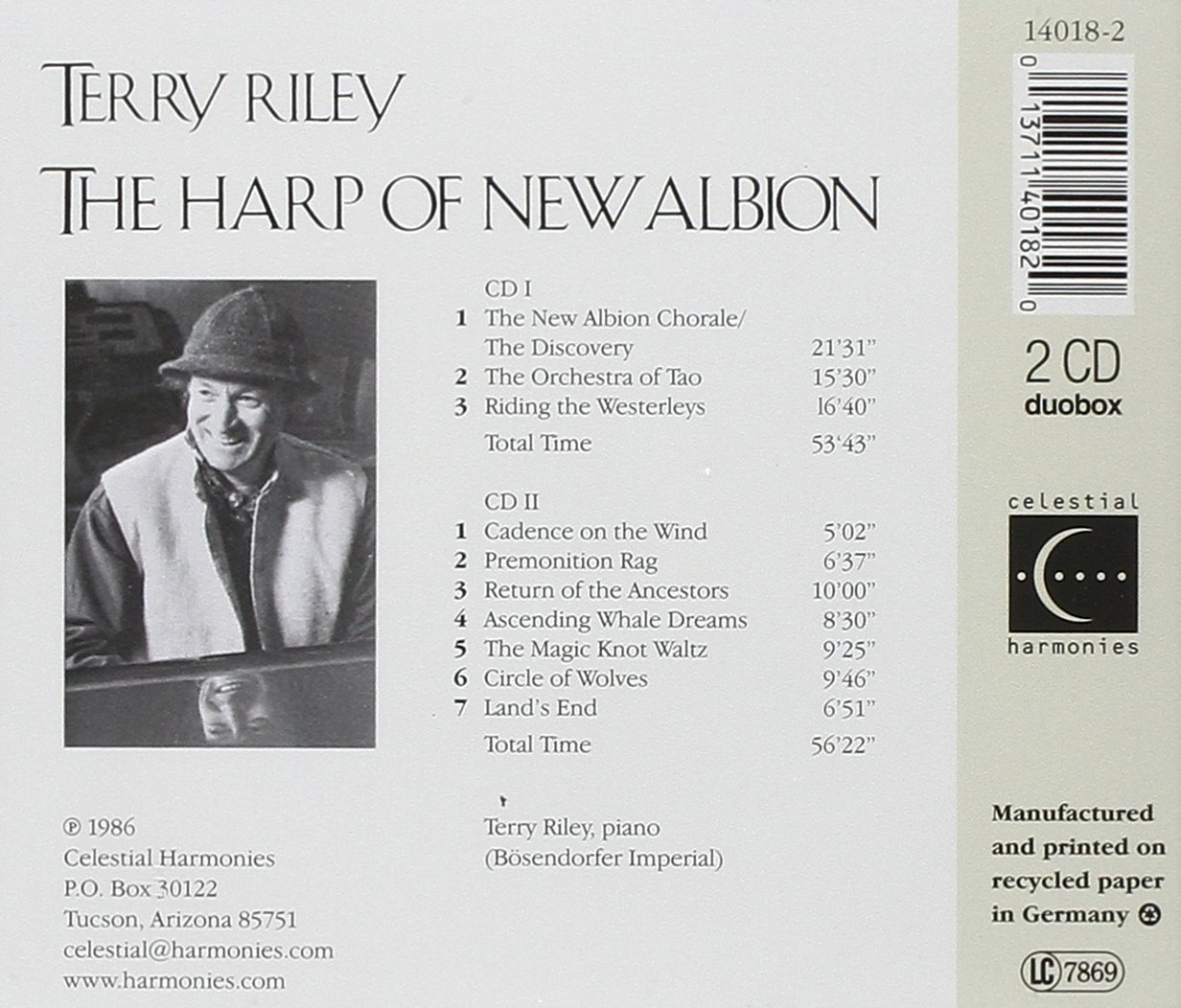 Recorded 3-4 January 1986 at the Academy of Music, Munich

An evocative and poetic journey, a bit too uniform in its improvisational processes
Originally posted on Amazon.com, 12 July 2010

“Nothing to do with the harp” (other than the title)? Not so simple. The work is, indeed, a long (almost two hours) quasi-improvisation for solo piano, inspired by- and an hommage to the harp supposedly left on unexplored American soil (Nova Albion, today’s Canadian West coast) by a member from the crew of Sir Francis Drake, half-way through his circumnavigation of the globe at the end of the 16th Century, that a medicine man found, declared sacred and placed on a cliff towering above the ocean to let the winds and climate play with it and alter its tonalities.

After others and especially his long-time friend and mentor LaMonte Young (see my review of LaMonte Young: The Well-Tuned Piano 81 X 25, 6:17:50 – 11:18:59 PM NYC), Riley used a special tuning system, which he calls “just intonation”. As some will know (and, not being a musicologist, I hope not to be to wide off the mark with my attempt at an explanation) the “equal temperament” tuning system used in the West since Bach at least, in order to ensure that every octave will be equivalent (and therefore allow to play in different keys on one keyboard), cheats by a few acoustical “commas” (the unit of pitch difference) on the lower intervals, making each of them accoustically (if not subjectively) out-of-tune, e.g. not in mathematical proportion to each other.

So, how does it sound? First: (slightly) out of tune. It may be that more than 400 hundred centuries of equal temperament have corrupted our (my?) ears, or that there is something wrong with the theories explaining that the equal temperament system is out of tune and that “just intonation” is in-tune, but fact is, for ears trained to Western instrumental classical music, Riley’s tuning, straying as it does from the equal-step division of the twelve tones in an equal-temperament octave, sounds like playing on a concert grand that has remained in the attic for too long.

Not that it matters, here: indeed, it is entirely “in-tune”, if I may, with the subject matter: the New Albion Harp’s strings vibrating in the North-American winds. Sure you expect it to sound out-of-tune.

And the music? Lots of notes. No “minimalism” here, neither of the sparse, Morton Feldman kind nor of the repetitive manner which Riley invented in 1964 with his seminal “In C”. The first number – 21 minutes of “New Albion chorale” and “Discovery”, starts evocative and pretty: Riley favors big washes of sound, scales endlessly going up and down. Appropriately windy, I guess, but a bit too pretty and facile, I find: fine for a middle-of-the-night impro that’ll send you high or dreaming, but too uniformly pretty and sentimental for my ears accustomed to contemporary music. It can bring Keith Jarrett to mind, LaMonte Young obviously, but above all it reminds me of some of the extraordinary piano pieces of Henry Cowell (Henry Cowell plays his own Piano Music); but Cowell harped directly on the strings, to extraordinary evocative power, and he kept them short (in the wildest passage of “Circle of Wolves”, CD 2 track 6, Riley sounds like he’s using one of Cowell’s favorite technique of striking a key with the thick of the finger touching the string, so as to muffle its sound).

But it gets better. “The Orchestra of Tao” and “Riding the Westerleys”, the two next pieces on CD 1, are quite imaginative in their sound invention, less “pretty” and more exultant and agitated, at times to impressive effect. I don’t know if it has to do with the tuning or if Riley has somehow prepared his piano, but there is something nicely metallic to the tone in “The Orchestra of Tao”, making it sound like a cymbalum almost. “Riding the Westerleys”, with its huge crescendo and clock-work accelerandos, is beautifully evocative.

The rest is much of the same ilk. Ultimately, this is an evocative journey, but Riley’s quasi-improvisation has, to my ears, three limitations: one, its relative rhythmic squareness; Riley rarely departs from steady steady sixteenth or thirty-seconds notes producing washes of sound, even in favor of simple dotted rhythms. It very rapidly becomes pretty repetitive (not stylistically!) and predictable. Two, its mass of notes; Riley rarely departs from the – again, predictable – washes of notes and sounds, there is rarely a moment of sparseness and repose, as if he was afraid of silence. Two such moments are found in CD 1 track 3 “Riding the Westerleys” and CD 2 track 3, “Return of the Ancestors”, with their slow-moving, brooding chordal progression, but even there, after 2:40 minutes (each time!), Riley feels the need to double time, and off we go again. Even the appeased and dreamy finale, “Land’s End”, does Riley manage to fill with notes. And three, its uniform “prettiness”. Fine for an hour, but two hours of it, at least as a purely CD experience, is too much of a sweet thing.

Riley’s String Quartets, written for and with the Kronos Quartet, remain my favorite part of his output: see my reviews of Cadenza on the Night Plain on Gramavision R2 79444 and Salome Dances for Peace on Elektra Nonesuch  9 79217-2.

And a post-script from July 2011. I just discoverd the music for bowed piano of Stephen Scott. Now THIS is the music Riley should have written for The Harp of New Albion. It is music of extraordinary beauty and evocativeness, with the piano sounding not like a piano but like some gigantic organ, or musical saw, sometimes an accordion, built not by human hands led by the design of human intelligence, but by the forces of nature, and put in vibration by the winds of the earth, or maybe the winds of space. By all means give it a try: New Music For Bowed Piano.