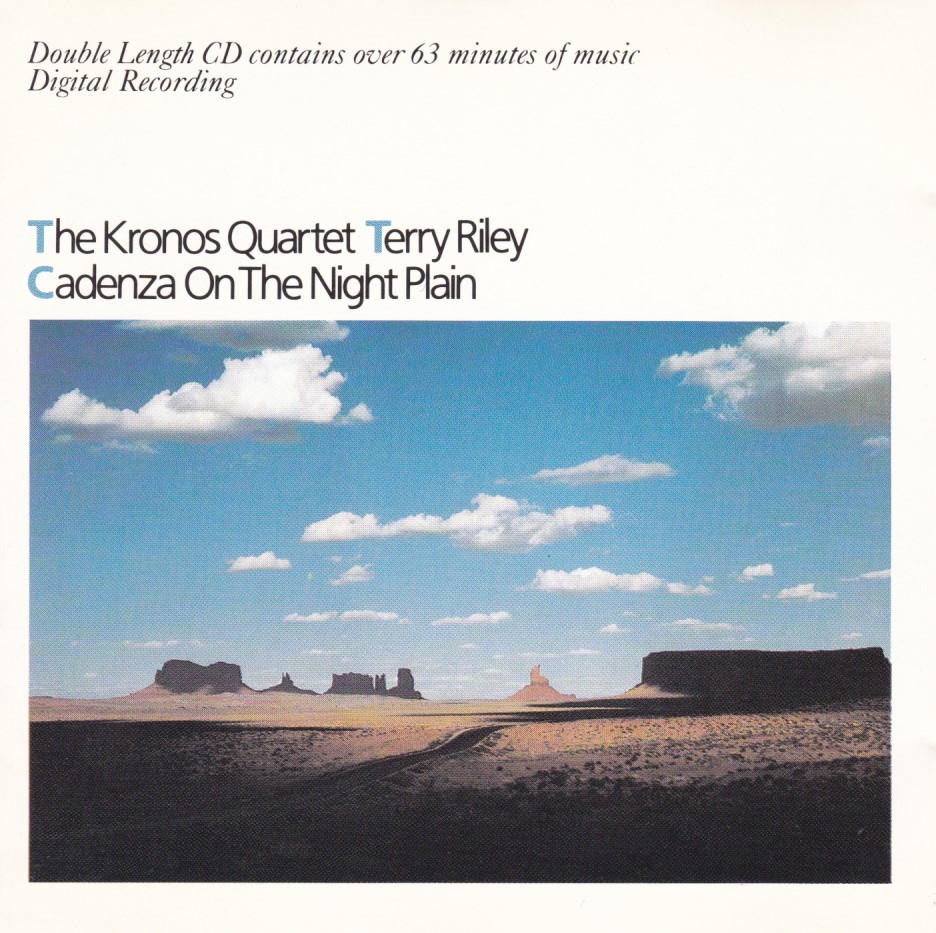 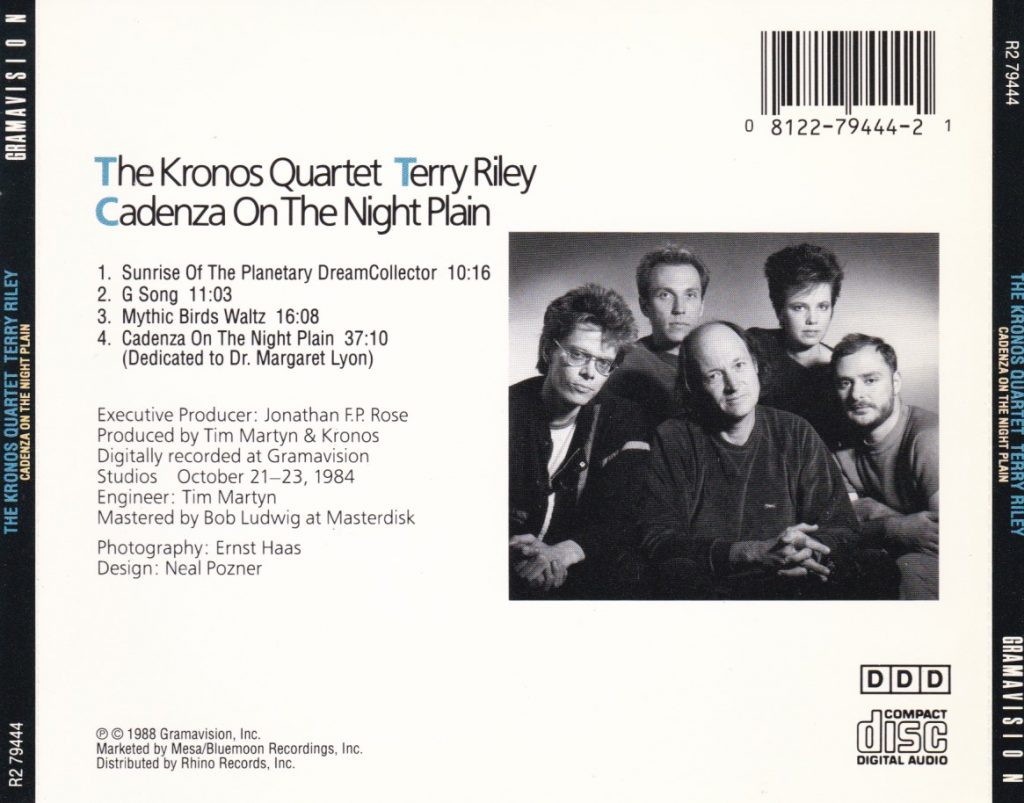 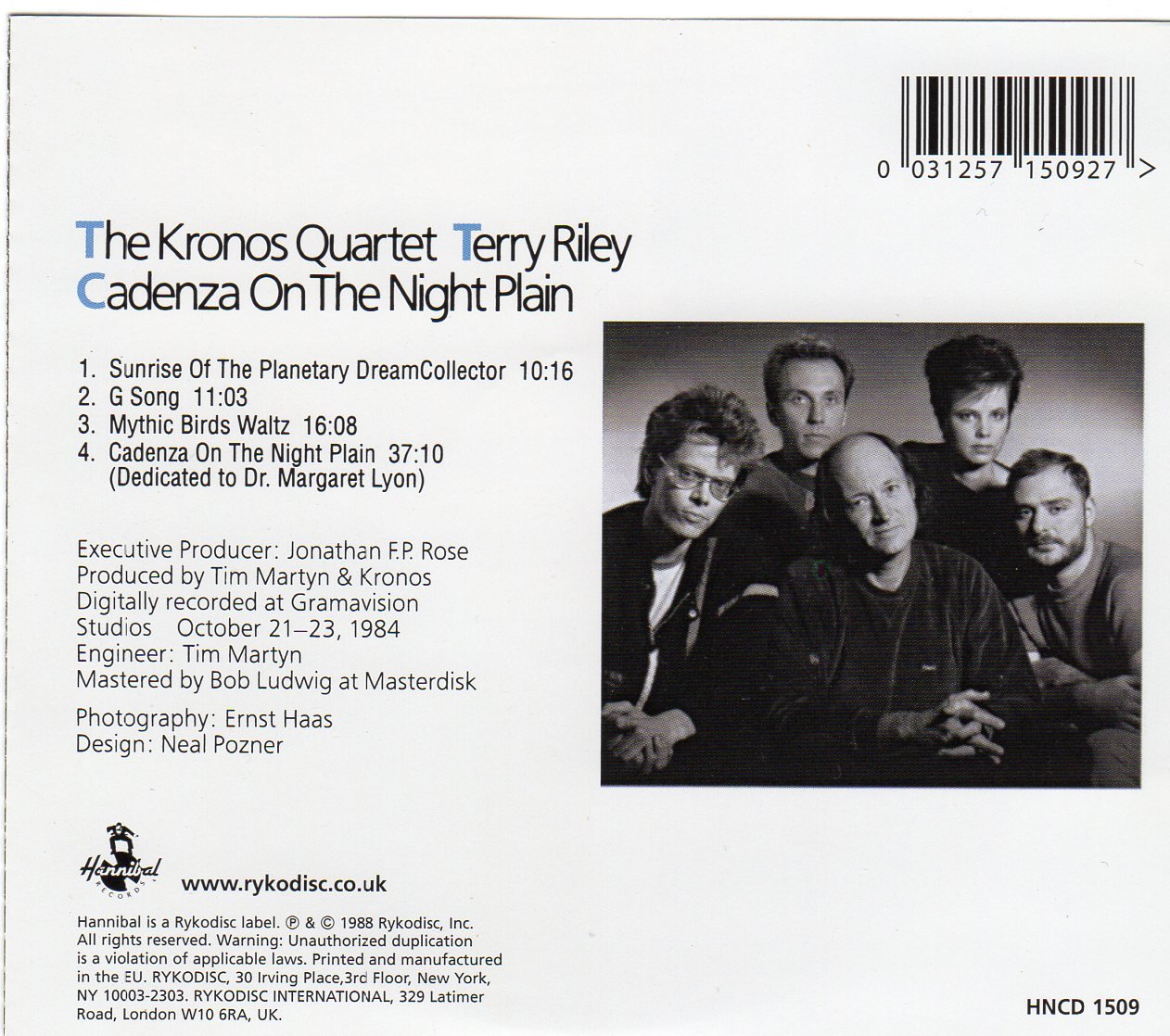 Despite being, with his seminal “In C” from 1964, the inventor of “minimalism” in music, Terry Riley hasn’t really been the main exponent of that compositional style. He let that to Reich, Glass and Adams in the US, or to Gorecki, Tavener and Pärt in Europe, as well as to many Dutch composers, like Andriessen or Ten Holt (I don’t know why the music has so much appeal in the Low Countries, but that is a fact of observation), and he moved on to night-long keyboard improvisation and North-Indian ragas, of which he became a great specialist, under the tutelage of Pandit Pran Nath.

I prefer to associate the term “repetitive music” to the brand of minimalism set forth by “In C” and illustrated by all the composers mentioned above, and based on the dogged and pulsating repetition of minimam cells. The basic cells may be minimal, but through complex processes of overlapping and delay the result can be all but “minimal”, as exemplified by the lush orchestral music of John Adams.

The other branch, to which I would reserve the word “minimalism”, is represented by composers like Morton Feldman and, in Europe, Salvatore Sciarrino, Helmut Lachenmann and Gerard Pesson: their music is not repetitive but still based on truly minimal musical events, usually slow-moving, it is music that is content to remain at the threshold of silence and in which, consequently, each new event has tremendous impact, like a whiff of air in an enclosed chamber.

While I am very fond of “minimalism” so defined, “repetitive music” as I’ve described it doesn’t usually appeal to me at all. It’s not the repetition I take exception with (as everybody else I enjoy Ravel’s Bolero), it’s the tonal and even saccharine harmonies that usually go with it. I have no idea why they always seem to come together: is there something intrinsic to repetition that necessarily calls for those tonal and mushy harmonic underpinnings, or is it a choice – and a lazy one, too – from the composers, an eagerness to be commercial and appeal to wider, pop-bred audiences (and, at least in the case of many compositions by Phil Glass, I suspect that the former is the right explanation).

Anyway, those expecting a remake of “In C” for string quartet, be warned: Riley’s string quartets are neither nor. Still, they are hugely appealing. The four quartets gathered here (but they may be viewed as a single work in four movements) were composed at the behest of and for the Kronos Quartet, which developped a close relationship with the composer during the second half of the 1970s, when they met at Mills College. The incentive came for Riley at the right time and the quartets, composed in close association with the performers (two of them, “G Song” and “Mythic Birds Waltz”, were completed in 1980, “Sunrise of the Planetary DreamCollector” and the 37-minute long “Cadenza on the Night Plain” in 1984 say the liner notes, 1983 says Riley’s website), are infused with his fascination for many types of folk music: North-American Indian as well as North-Indian. The construction is very free and improvisational, there is no development of themes in the time-allowed manner so typical of western classical music, rather a juxtaposition of them, but it all feels very organic and never jarring. It is the harbinger of the kind of “World music” of which the Kronos became a major advocate, with other ensembles such as the Balanescu Quartet. The music is dance-like and dynamic, highly colorful, fully using the instrumental resources of the string quartets (ear-catching glissandos, mesmerizing cadenzas in the last and longest quartet, “Cadenza on the Night Plain”), immensely engaging, easy listening (at least to ears accustomed to contemporary classical music) but, I find, never facile or pandering (even to ears accustomed to contemporary classical music).

Excellent liner notes, great disc. I’ve had it in my collection ever since when it was released in 1988, lent it once to a friend and it never came back, bought it again, and I am glad to see that it is still available for cheap. It must be completed with Riley’s later and major work for the same ensemble, “Salome Dances for Peace”, on Elektra Nonesuch  9 79217-2 (link will open new tab to my review).

, but the CD was shorn of one track, the “G song”, to fit what were then the time limits of the CD medium. It was reissued in 1988 with that additional track, adding up to a total time of 75 minutes –

substantially more than the “over 63 minutes of music” announcement still boasted on the reissue CD’s front cover. So you want to avoid that first edition.