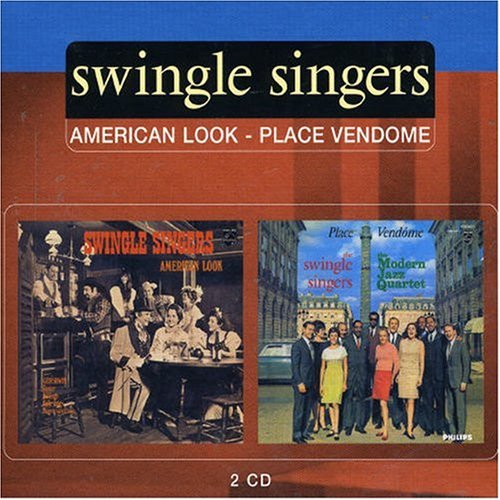 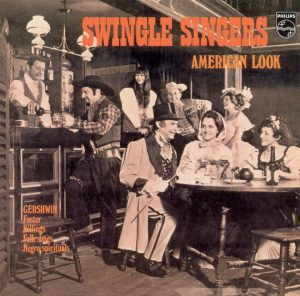 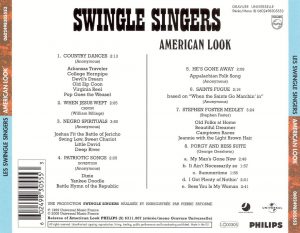 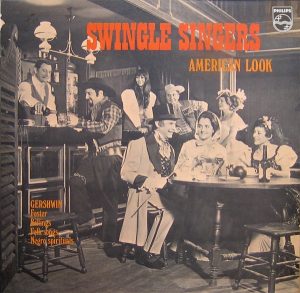 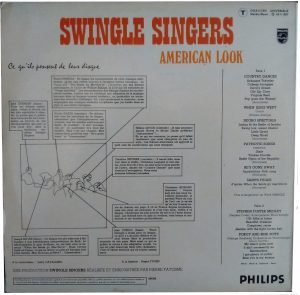 The Swingle Singers in 1969: change and permanence
Originally posted on Amazon.com, 6 May 2011

The original, Paris-based Swingle Singers, the vocal octet founded in 1962 by the American Ward Swingle (born in Mobile, Alabama), had specialized in a style more or less invented by Swingle: scatting the great hits of the classical composers. They started with Bach (in their seminal and chart-making “Jazz Sébastien Bach” (published in the US under the title “Bach’s Greatest Hits, and reissued on CD in 1985 on Philips 824 703-2 with its sequel from 1968, “Jazz Sébastien Bach volume 2 / Back to Bach”), then moving on geographically and chronologically to Haendel, Vivaldi, Telemann, Mozart, the Romantics (Beethoven, Schubert, Chopin, Mendelssohn, Schumann, Mussorgsky) and 20th-century Spanish classics (Sarasate, Rodrigo, Albeniz, Granados…): see my reviews of Anyone For Mozart, Bach, Handel, Vivaldi?,Swingling Telemann,Getting Romantic,Sounds of Spain.

By 1969, Swingle and his group felt the need to do something else and widen their scope, and this album is the result. It manifests both change and permanence.

Change, obviously, in the choice of the musical material: no more the great hits of the classical composers (but the French Swingles would return to those in 1972, with their “Les Quatre Saisons / The Joy of Singing” album, with arrangements of pieces of Pachelbel, Bach. Marcello, Mozart and the Spring from Vivaldi’s Four Seasons), but the American vernacular pops: a medley of country dances, of Negro Spirituals (Joshua Fit the Battle of Jericho, Swing Low, Little David, Deep River), of patriotic songs (Dixie, Yankee Doodle, Battle Hymn of the Republic), of Stephen Foster (Old Folks at Home, Beautiful Dreamer, Camptown Races, Jeannie with the Light Brown Hair) and of Porgy and Bess (My Man’s Gone Now, It Ain’t Necessarily So, Summertime, I Got Plenty of Nothin’, Bess You Is My Woman) plus a few other snippets. Does it seem copious? It ain’t. The early Swingle albums were always frustratingly stingy, even for LPs, never much over 30 minutes and sometimes even less, and this is exactly what you get on these CD reissues, from a series published by Universal in the early-to-mid-2000s, “original jacket collection” type. This one is 29:58, and, other than milking us cows, I simply don’t get the point of reissuing them straight on CD, rather than pairing two of these original LPs (which is what Phonogram Germany did in the early days of the CD, when they started reissuing the early Swingle Albums, logically pairing the two Bachs together and the 1964 and 1965 albums “Anyone for Bach, Handel, Vivaldi?” with “Swinging Mozart”, see links above).

Change also, in that, while Swingle always tried to remain as close as possible to the instrumental originals in his arrangements of the great hits of the classical composers, only giving them a jazz rhythm and swing by adding a drum-and-double-bass section, here he departs much more substantially from the originals, and not just by dint of arranging them in the form of medleys. In fact he’s often “classicised” them, pulling them towards forms typical of baroque and classical music, for instance by adapting “When the Saints Go Marchin’ In” in the form of a fugue, or William Billings’ “When Jesus Wept” as a canon. In Swingle’s own words: ” during these last few years, The Swingle Singers’ performances have demonstrated how Baroque music can be adapted for a modern musical language, particularly in the way the rhythmical aspect can be stressed. Here you have” exactly the opposite: we’re using modern music and rhythms treated in a Baroque style and form“.

Permanence – other, of course, than the very principle of using the vocal octet as an instrumental ensemble, along with a drum and double-bass underpinning – is that, even when choosing compositions that were originally vocal (and other than the country dances, all are), Swingle’s arrangements drop the lyrics and use only the Swingle’s customary scat. The later Swingle Singers, the London group reformed by Swingle after the Paris group had disbanded in 1973, would sing the lyrics of the vocal-originated compositions they tackled (both from jazz/pop/rock and from classical music), and even superimposed newly written lyrics on music that was originally instrumental (see my review of Swing Sing), in the tradition of the jazz “vocalese” brought to a state of perfection by the famous Lambert-Hendricks-Ross trio (Sing a Song of Basie) and “Frenchified” by Mimi Perrin’s Double Six de Paris, of which Swingle had been a member (Les Double Six).

The disc is frustratingly short, but the little it offers is enjoyable – probably more to American listeners who have this music in their genes (although many of the songs will be familiar to foreign audiences as well, like the Negro Spirituals, the patriotic songs, “When the Saints” and the Porgy and Bess excerpts). The Swingles sing with their customary silk and pitch-precision. I’m not crazy about this drummer, Roger Fugen, who over-uses metal percussion I find (earlier drummers on the Swingles’ albums had been the famous Daniel Humair and Bernard Lubat, as well as Gus Wallez, the drummer of Michel Legrand). And I also find that, despite the seductiveness of Swingle’s arrangements and of the group’s realizations, there is nothing as enrapturing as their (earlier or later) Bach, Vivaldi and Mozart, nothing that can even remotely compete with Badinerie, Aria on a G-String, the Spring, the Adagio from the 21st Piano Concerto or Turkish March (to mention just a few). You just can’t change the respective value of the original material. I don’t want at all to disparage Gershwin, Foster and all the rest, all these composers and their songs are entertaining and offer their rewards, but… Gershwin simply ain’t Bach and Foster ain’t Mozart (and would never claim to be).

The cover photo is fun. These ARE the Swingle Singers. From left to right (it’s all indicated in the opening folders of the CD, reproducing the back of the original LP): bass Jean Germain (bartender), tenor Joseph Noves, (sitting first row:) bass Jean Cussac, soprano Christiane Legrand and mezzo (called here contralto, which she is not) Claudine Meunier,standing behind soprano Nicole Darde, Ward Swingle and mezzo/”contralto” Hélène Devos (only four of them were part of the founding group, Cussac, Swingle, Meunier and Legrand).