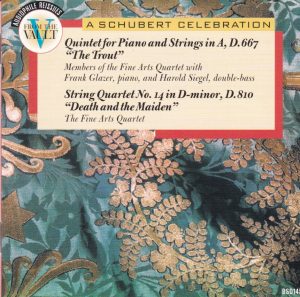 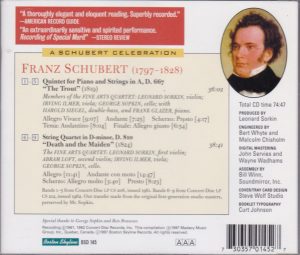 One of the first recordings of Schubert’s 14th Quartet “Death and the Maiden” to be issued on the then brand new medium of Long Play vinyl record, as early as 1949, was the one by The Fine Arts Quartet, one of the most prominent US string quartets from the early 1950s on; it came out on one of Mercury’s earliest LP’s (and not yet dubbed “Living Presence”), MG-10008. It wasn’t however a new recording, but the reissue of one made in November 1947 and originally published on 78s (also in 1949), on Mercury DM-14. With the advent of stereo, in the late 50s and early 60s, the Fine Arts, as many other groups, rerecorded the pieces they had done in mono, on their own label, Concert Disc. It is the remake that Boston Skyline has dug out from the vault, paired with The Trout Quintet recorded with pianist Frank Glazer and bassist Harold Siegel. Boston Skyline gives the copyright years of 1962 (Quartet) and 1961 (Quintet), but it isn’t possible. The Quartet was originally published on Concert Disc CS-212 (link will open a new tab to listing on Discogs.com) and is mentioned (“moderate sales potential”) in The Billboard of October 30, 1961, so the recording date of 1960 given on The Fine Arts Quartet’s website is more likely, although their discography is not always entirely accurate. As for the Quintet, it first came out on CS-206, which got reviewed in the specialized press as early as August 1959 (ensemble’s website says recording 1958). See my Concert Disc discography for more details.

Sound engineers then seem to have known secrets that went lost in the digital era, or maybe the people at Boston Skyline are sound wizards (and the fact that the transfers were made “from the original first-gerneration studio masters, preserved by Mr Sopkin”, the quartet’s cellist, certainly helped). In their transfer, outside of a some unobtrusive tape-hiss, the recordings sound with an astonishing presence and clarity in the delineation of each instrument (dialogues between violin and cello are especially felicitous) that nonetheless never imperils the sense of ensemble playing.

The Fine Arts’ interpretation of the”Trout” is very similar in style and spirit to the one Rudolf Serkin made at the Marlboro Festival six years later (Sony). Unlike the famed 1957 Curzon-Wiener Octett members, its charm is not pervaded by a sense of mawkish sweetness, and the dominant values are forward motion and muscularity. Only in the Finale do they adopt, rather than the forward-going (and irresistible) boisterousness of Serkin and friends, a more relaxed and genial tempo, closer to Curzon’s, but again with more of energy. It is only in the 4th movement (the famous “Trout” variations), taken at a basic slowish tempo – again, very similar to Serkin’s reading, though a little more animated – and alternating between effusive sweetness and at times an admittedly impressive Beethovenian power, that I find that the Fine Arts are not entirely stylistically attuned to the piece: Curzon and the Wiener, with their more carefree mood, lively tempo and willingness to sustain it (almost) to the end of the movement, are closer to my mark here.

The Fine Arts’ “Death and the Maiden” still holds up well today. Their 1st movement starts with gripping tension and they are alive to the more charming aspect of the music (the Maiden?), but they do have a tendency to let the tempo broaden as the development unfolds, resulting in a slightly jarring tempo shift at the return of the first theme (6:36). Their second movement (the theme and variations which gave the piece its subtitle) is taken rather slower than Schubert’s tempo indication “Andante con moto” would suggest and more like a funeral march (not inappropriate here), lending a wailing tone to the first two variations. But they are also prone to let expressive concerns rule over tempo consistency, and give the tempo a marked fillip on the third variation (7:32). The Scherzo is one of those readings that adopt a slowish tempo and go for weight and power rather than rage and fury. One positive aspect of this approach is that it allows for a certain consistency of tempo in the middle trio (Schubert writes no tempo change, though most quartets do apply one here, and sometimes very perceptibly so) which hence is free of some of the customary mawkishness. Their Finale is fine, and the only reservation I can express is that there have been better ones: brisker (Schubert’s tempo indication is “allegro molto”) and at a tempo more apt to evoke images of a headlong race to inferno, making more of the precise dynamic contrasts written by Schubert: with the Fine Arts, forte is not always distinguished from fortissimo, and the pianissimos could be more hushed; also, 1st violin Leonard Sorkin’s tone gets slightly off pitch in the more hectic moments.

Still, despite these few reservations, this is an interpretation with which no one will go wrong, and in superior sound. Thanks to Boston Skyline for bringing it back to us. And please give us more of the Fine Arts !