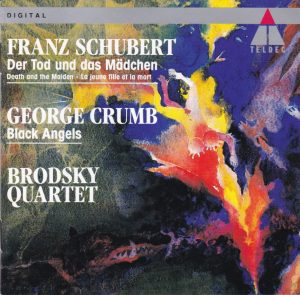 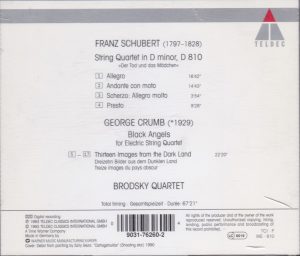 The Brodsky Quartet has had the excellent idea to couple Schubert’s famous 14th quartet “Death and the Maiden” with an outstanding interpretation of Crumb’s breathtaking “Black Angels”, the quartet for amplified strings written by the American composer in 1970. Composed in reaction to the Vietnam war (Crumb inscribed “in tempore belli” at the end of his score) and subtitled “Thirteen images from the Dark and”, its arch-shaped three sections evoke the Fall from Grace, Spiritual annihilation, and Redemption. Crumb, one of the most original composers of the 2nd half of the last century and still alive and hopefully active today, conjures terrifying, eerie and spellbinding sound effects. Besides unusual string effects such as bowing on the wrong side of the strings, Crumb utilises voices, tam-tams and maracas, and even water-pitched crystal glasses! Unfortunately I do not have a score for close comparison, but the Brodsky’s reading seems at least as good as any I’ve heard, which include the Kronos (Elektra Nonesuch) or the Concord quartet (American String Quartets, 1950-1970, Vox).

Crumb’s quartet is related to Schubert’s through the quotation, at the beginning of the piece’s second section, of the famous theme first used by Schubert in his 1817 Lied, then again as the basis of the five variations that make up the 2nd movement of his quartet, giving it its famous title. The Brodsky’s interpretation of Schubert’s quartet is a good but not outstanding one. Ensemble tone is fine, with no trace of scrappiness, and tempos are “average”, neither particularly fast nor particularly slow. Generally speaking the Brodskys go for weight and power rather than breathless vehemence – not necessarily the most gripping interpretive option in that piece -, but they display a commendable attention to all the details of articulation and dynamics written by Schubert. In the introductory allegro, unlike most other ensembles but according to Schubert’s lack of any indication to do so, they do not slow down the tempo for the 2nd and lyrical theme at 1:59, and give it a fine rhythmic snap. Their second movement is not really true to Schubert’s “Andante con moto” tempo indication and sounds rather like a funeral march – not entirely inappropriate here; the explosions of the third variation conjure images of a stampede of heavily harnessed horses rather than, as with others, Death furiously whipping its steed. They do not exaggeratedly slow down the Scherzo’s central trio and are thus rather successful at avoiding the coyness often lent by others to that section. The Finale is powerful but not particularly brisk, with a fine attention to the details of phrasing and articulation.

In the same vein there is a Capriccio CD, 10 744, from 1998, on which the Petersen quartet gives an interpretation of Schubert’s quartet which I find more interesting, because it is more extreme in its interpretive choices , coupled with “Das Mädchen und der Tod” (The Maiden and Death), the 2nd string quartet by (former East)-German composer Siegfried Matthus: a fine work, though not as striking as Crumb’s incredible quartet.

In sum, a CD worth knowing for the interest of its coupling and Crumb’s magisterial quartet.