Rudolf was conductor Willem Mengelberg’s nephew or grand-nephew, sources differ. He was also a composer, conductor and musicologist, and in in the 1920s the chief executive of the Concertgebouw Amsterdam. The great online archive of the Concertgebouw Orchestra shows that his works had often been performed by Willem: 49 performances of various works between 1917 and 1942. 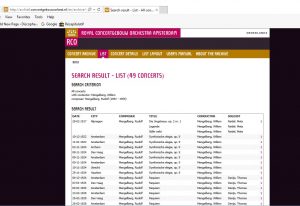 Salve Regina for soprano and orchestra had been premiered by Willem on 15 December 1934 with soprano Jo Vincent. Both recorded it for Telefunken (78s rpm SK3084/5, paired with Hendrik Andriessen’s Magna res est amor) in April 1940 (9 or 12, sources differ), and that recording (together with the Andriessen) was reissued by Teldec, Willem Mengelberg: Dutch composers (Adrian Valerius, Cornelis Dopper, Julius Röntgen, Hendrik Andriessen, Rudolf Mengelberg, Johan Wagenaar). Teldec 243 723-2 (1988). I’ve found its highly lyrical mixture of Puccini’s Tosca and of the more pastoral streaks of Honegger to be quite taking.