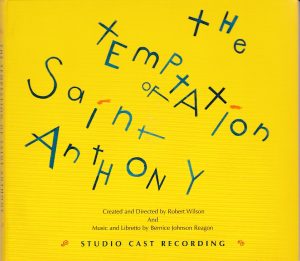 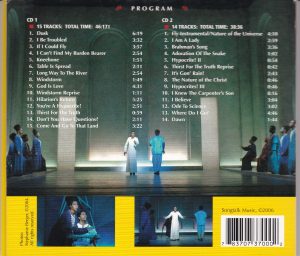 I chanced on this CD while perusing the other offers of an eBay seller and bought it for Robert Wilson.

Wilson is the artist and stage director who survived Waco, Texas (because he left), the champion of minimalism on stage and of the rejection of all the tradition of “Actor’s Studio” naturalism. His productions are highly abstract and sophisticated, never flaunting the emotions at the public, even cold if not icy, but with the ambition of communicating something like “the fire under the ice”, very choreographic, interested in spatial combinations, not psychology; they are not the representation of “reality” on stage but the representation of signs, symbols, on which the imagination of the spectator can (if he’s in the mood for that kind of theatre) reconstruct his own reality. A director so much in demand cannot always maintain the highest degree of invention and originality, and Wilson has often been content to imitate, if not caricature himself. His productions are hieratic, but when Wilson gets erratic they can be loweratic.

Not that I’ve been closely following the career of Wilson, and I had never heard of that piece in particular. Re the liner notes: “The Temptation of Saint Anthony is a new and original musical created and directed by Robert Wilson, with music and libretto by Bernice Johnson Reagon, inspired by the 19th century ovel of Gustave flaubert, adapted by Wolfgang Wiens”. There’s even a Wikipedia entry devoted to what it calls an “opera”, that gives more information: “The production debuted in June 2003 as part of the RuhrTriennale festival in Duisburg Germany. Subsequent performances included the Greek Theater in Siracusa, Italy; the Festival di Peralada in Peralada, Spain; the Palacio de Festivales de Cantabria in Santander, Spain; and Sadler’s Wells in London, Great Britain; the Teatro Piccinni in Bari, Italy; the Het Muziektheater in Amsterdam, Netherlands; the Teatro Arriaga in Bilbao and the Teatro Espanol in Madrid, Spain. The opera made its American premiere at the Brooklyn Academy of Music’s BAM Next Wave Festival in October 2004. The official “world premiere” was held at the Paris Opera Garnier becoming the first all African American opera to perform on its stage since the inauguration of the Académie Nationale de Musique – Théâtre de l’Opéra in 1875.”

But then, here, you have the CD, not the DVD, so it’s the music you are experiencing. I had never heard of Bernice Johnson Reagon before chancing on this disc. What’s it like? Well’, it’s like what I might have expected if I had read her bio on Wikipedia first: “(born October 4, 1942) is a singer, composer, scholar, and social activist, who founded the a cappella ensemble Sweet Honey in the Rock in 1973”.

So it sounds like gospel for choir and electronics (CD 1 track 1), electric, vocal and choral Negro Spiritual (track 2 “I Be Troubled”, 4 “I Can’t Find My Burden Bearer”, 11 the very clichéd “Coming Home”, 15), word-less “space” Christmas Carol with loud cymbal resonance (8 – supposed to depict a windstorm), James Brown Funk (6, 12), electric Soul (7), Rhythm & Blues (14), Africa-inspired crossover World-Music (track 1, track 3, track 5), sounding at times dangerously reminicent of “Hakuna matata” from The Lion King (9). There was, on CD1, a short track (10) of tougher electronica and percussion, and it came as a relief.

It’s “The Temptation of Saint Anthony” and there is no libretto to help you follow the narrative, but judging from the few pictures of the production reproduced on the CD, it must have been an Afro-American Temptation. I find their style of singing again very clichéd – you know, when people sing “In the moanin’”, it reminds me of Al Jolson painted in black, or even of George Gershwin writing a well-intentioned but perhaps slightly condescending opera for black people. But my negative reaction may come from the fact that here is no libretto, nothing to help follow the narrative. And after all, I guess there is an element of truth even in those clichés. Some blacks do talk like that – apparently they drop it when they want to get elected President of the United States.

But it’s not just the pronunciation, it’s the music that I find very clichéd – a service in a Harlem Church for the tourists from Europe – and I have to confess that I didn’t lend as much attention to the second CD as I did to the first, just checking if there may have been anything different there. Track 1 starts instrumentally and then becomes vocal and sounds like a mixture of Blues and Indian raga with guitars, and that too came as a refreshing change. In track 10, the description of Jesus by “someone who knew the carpenter’s son”, sung like a “deep south” Blues, was fun. Other than that, CD 2 is exactly like CD 1. But listeners with more of a bent for African-Amercan music, or European tourists dreaming of “moanin’” service in a Harlem Church, might find a greater appeal to it than I did.