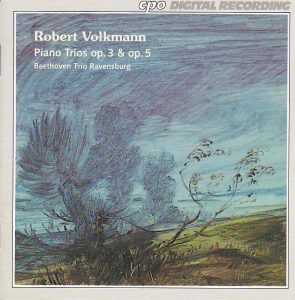 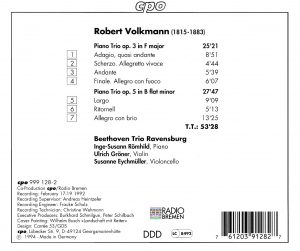 WARNING: MASTERPIECES, of equal stature as the trios of Brahms – and posterity is a bitch
12 October 2016

I wanted this disc not to stop. Or, listening to it, I wished that Volkmann had written more than two piano trios. It’s not every day that you listen to piano trios from the mid-19th century that give you the impression that they are the equal of those of Brahms.

Robert Volkmann (1815-1883) is one of those now almost-forgotten composers that’s been blighted in the shadows of the great giants of the Romantic era, and especially (when in comes to chamber or symphonic music) Brahms. Unlike other such composers (Bruch comes to mind, outside of his popular Violin Concerto), Volkmann’s success wasn’t immediate, he struggled for recognition, settled in Pest in 1841 (Buda and Pest weren’t united then), a city dominated by German culture but away from the major German-speaking cultural center which was Vienna, and recognition came only in 1852 with the Piano trio in B flat minor op. 5, when both Liszt and the great virtuoso and conductor Hans Von Bülow hailed and championed it. It’s in the wake of the success of that piece that Volkmann’s Trio in F major, composed some then years earlier, was published as his opus 3. Following the success of his Trio, Volkmann made a bid to gain position in Vienna, where he moved in 1854, but apparently it didn’t work out and less than four years later he moved back to Pest, where he had a firm and attractive offer by a publisher with a regular stipend independent of sales. It’s only in the 1860s that his orchestral works gained much popularity in Germany, following the premiere of his First Symphony in Moscow. By the time of his death however he had long ceased to compose, and he fast disappeared from the concert halls and memories.

Through his Piano Trio op. 5, Volkmann realized the incomparable feat of reconciling the two champions of the two opposite and feuding camps, the “modernist” and pro-Wagner Liszt and the “classicist” Brahms. Volkmann dedicated the Trio to Liszt and repeatedly expressed his admiration for his works. On that account, Volkmann’s relationship with Von Bülow became strained in the 1860s, when Von Bülow, then an ardent champion of Wagner, demanded of Volkmann that he take sides, and Volkmann refused – he declined as well to sign Brahms’ anti-“Music of the Future” Manifesto in 1860 (the irony is that, after von Bülow’s wife Cosima left him for Wagner, Bülow turned his shirt and joined the pro-Brahms camp). About the feud, see Wikipedia’s informative article. Decades later Volkmann served with Liszt as composition teacher at the Budapest Conservatory. As for Brahms, their meeting took place only in 1866, as Brahms had moved to Vienna after Volkmann had left it, but they appreciated each other enough to “duzen” in their correspondence (the German non-formal “you”), and to play each other’s works. Volkmann was also very close to a close friend of Brahms, Gustav Nottebohm, better known then and now as a musicologist and specialist of Beethoven’s work, but also a fine Brahmsian composer in his own right, if his Variations on a Theme of Bach for two pianos is to serve as a pointer.

I already knew the orchestral works of Volkmannn, including his two symphonies which I found fine although not scaling the heights of those of Brahms, and his Cello Concerto which I think is a true masterpiece, a work from Volkmann’s time in Vienna in the early 1850s and the missing link between the one of Schumann (1850) and the one of Dvorak – incidentally, it is one of those works of Volkmann that Brahms conducted, and one of the two letters that we have of Brahms to Volkmann is about the Concerto which he was rehearsing in Vienna in 1874. The scores of both trios are available from the International Music Scores Library Project (and eternal gratitude again to those who uploaded them) and following with score confirms what a first score-less hearing already indicated: both trios are masterpieces, of irresistible romantic passion and sweep, deep and lyrical songfulness in the Andante of op. 3 rising to a passionate climax, beautiful pathos in the opening movement of op. 5. The disc’s annotator and various reviews I’ve read hear in the trios echoes of Beethoven, Schubert and Mendelssohn, but the heights of Romantic passion evoke pure Brahms to my ears. For the record, the original version of Brahms’ first trio is from 1854, and its revision and the two other trios date from the late 1880s and early 1990s…  Other than their passionate emotional atmosphere and soaring melodies, Volkmann’s trios also offer touches of great originality, like the long enunciation of the theme by solo piano (with harmonies in the low register, like Brahms) that opens Trio op. 3. But it’s even more striking in opus 5, which starts with an unusual Largo movement, but by shortening the note values within the beat and playing on “panting” syncopations, Volkmann brings it to a climax of almost unbearable intensity – for some reason, its intense and dramatic pathos evoked Tango. The Finale, as long as the first two movements, combines Presto and Largo and reaches at 10:50 a summit of devastating power. Even when Volkmann writes what begins like a more light-hearted and dance-like movement, in the second movement “Ritornell” of opus 5 – something like Volkmann’s Hungarian Dance – there are undercurrents of “Schadenfreude” and Volkmann soon lends his thematic material more somber and dramatic hues. Like Brahms, Volkmann likes rhythmic ambiguity, and he often offsets the possible rhythmic squareness of his triple-meter time signature by accenting the second beat (first movement of op. 3), or, in the 4/4 simple-meter of the first movement of op. 5, again by accenting the half-beat and slurring it into the next beat.

The Beethoven Trio Ravensburg does justice to both scores, with tempos that are sometimes a little slower than Volkmann’s tempo indications, but that is in accordance with today’s interpretive paradigms. Cpo deserves the greatest gratitude for championing the works of Volkmann (which only adds to the greatest gratitude tey deserve for championing much else) – they also recorded (among other works) his six string quartets and his late and charming String Serenades. The trios were recorded in 1992 and the CD published in 1994, but, sadly, it doesn’t seem to have ignited a Volkmann revival: I can find trace of only one subsequent recording of the Trio op. 5, on the obscure label Querstand, a Volkmann “Jubilee Edition 2015” with various piano pieces and Lieder for soloists or chorus, barcode 4025796015027. Why are Brahms’ Trios so universally performed and recorded, and not those of Volkmann? Oh, many reasons, I’m sure: availability of scores, lack of curiosity and knowledge of performers – every budding musician will tackle Brahms, every classical-loving household will have at least a recording, but nobody’s every heard of Volkmann, and after all instrumentalists spend their time learning and perfecting the standard repertoire, which leaves little time for discovery. But whatever the reasons, they are NOT because Volkmann’s Trios are inferior to Brahms’. They are magnificent works that belong to the canon of 19th-century masterpieces in the genre. They (further) put the lie to the notion that there are no neglected masterpieces. Posterity is a bitch.

The surface of Volkmann’s compositions has barely been scratched, see his catalog of works on Wikipedia. Among these, he wrote his own Variations on a Theme of Handel, op. 26, for piano – five years BEFORE those of Brahms (op. 24)! (score not available on IMSLP – there are arrangements, not by him, for 2 pianos and piano 4-hands). They’ve been recorded by lona Prunyi for Hungaroton, HCD 31735, barcode 5991813173522, but apparently for download only. I HATE it when they do that, I want the CD, the liner notes, the object. Now, who will record a CD combining both Brahms and Volkmann’s Handel Variations, and, why not, the Variations on a theme by Handel op. 24 (!!!) by the obscure Karl Schwenka, and/or the Variations on a theme of Bach op. 52 by Reinecke? (both referred to in Adolf Hofmeister’s contemporary catalogs of compositions published in the 1840s and 1850s in the German-speaking area, quoted in Brahms Studies Vol. 3 p. 50, edited by David Brodbeck, University of Nebraska press, ISBN-10: 0803261969. The Reinecke is not to be confused with his Variations on a Sarabande of Bach for two pianos op. 24, which would make a perfect companion for Nottebohm’s, and Brahms’s Haydn Variations). Come on, pianists, fiddlers, cellists – and record labels! Step out of the box! Investigate! Discover! Dare! There is so much neglected beautiful music around, it’s daunting.

It’s because you find information like that online that sometimes I love the Internet too. On the same topic, here is, from Hong-Kong (!), a Master’s thesis on Volkmann’s Trios, from 2002 (the link will open a .pdf document).