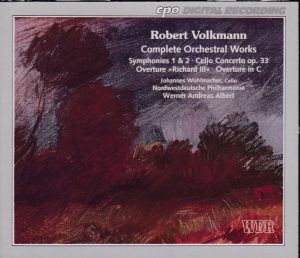 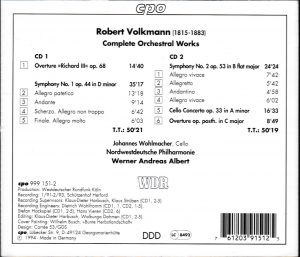 What is it that makes a composer a “minor” one? Not much, in fact.
Originally posted on Amazon.com, 23 January 2010, introduction modified for re-publication

But it’s always enlightening to explore those “minor” composers. Thanks to the recordings and the radio, we live so permanently in the company of the great masterpieces that we tend to become blasé and oversee what it is that makes them such masterpieces. Placing the Everest side by side with the Mont-Blanc may help you you understand how mighty and towering the former really is. Or the sun with Jupiter or the earth (and try VY Canis Majoris!).

Born near Dresden, Volkmann visited Schumann during his student years in Leipzig, and became a close friend of Brahms in 1864. Other than a four-year stint in Vienna (1854 -1858), his chosen home base was Budapest until his death in 1883 (same year as Flotow and Wagner). It is Liszt’s and Van Bülow’s embrace of his Piano Trio in b-flat minor in 1850 that gave him his shot at fame: hence his move to Vienna, but that ultimately didn’t bring the envisioned success.

This two-CD set from cpo presents itself as the “Complete Orchestral Works” of Volkmann, but this isn’t quite the case. Among the scores uploaded on the International Music Scores Library Project, there is an Overture in C-minor from 1842 which is not the same as the Overture in C major opus posthumous featured on CD 2, and a Konzerstück op. 42 for piano and orchestra (which has been recorded in the past. I have it performed by Jerome Rose with the Symphony Orchestra of Radio Luxembourg conducted by Pierre Cao on Turnabout/Carlton Classics 30371 00402, paired with a recording of Volkmann’s Cello Concerto by Thomas Blees and Pfitzner’s Violin Concerto by Susanne Lautenbacher). There’s also a companion Cpo disc with Volkmann’s three Serenades for strings.

The Cello Concerto was composed in the wake of the success of the Piano Trio (1853-55). Symphony No. 1 was completed in 1863 and No. 2 in 1865, which places them more than 20 years after the first ones of Schumann (and more than ten years after the “Rhenish”), and more than ten years before those of Brahms. Bruch’s respective three symphonies were composed in 1868, 1870 and 1883-6. The Overture in C is contemporary with the Symphonies and the date of the Richard III-Overture is not given, but its opus number seems to make it a later work than the rest.

Yes, there is much in Volkmann First Symphony that reminded me of Schumann (and, in the slow movement, strikingly the “Beethovenian” Schumann of the 4th Symphony), a little bit of Brahms. As the liner notes rightly point out, Volkmann (unlike Liszt or Berlioz) held on to the classical forms and architecture, and thus provides a link between Beethoven and Brahms. It is enjoyable music, very powerful and dramatic at times (try the opening of Symphony No. 1), Romantically “sturm und drang” (this is an anachronism in the definition of music styles, but not in the emotional content conveyed by the music), although it doesn’t always avoid the triumphant bombast (as in some passages of the 1st Symphony’s first movement). If you think of Beethoven, think of the Egmont Overture. The Overture “Richard III” is in fact a tone poem, not the overture to an actual opera, although its looseness of form and descriptive character is very redolent of the opera. It has pages of irresistible dramatic sweep and great romantic passion (the best Schumann again comes to mind).

Volkmann’s 2nd Symphony is to his first what Brahms’ second is to HIS first: a sunny and lighthearted counterpart to a dramatic and turbulent statement, which doesn’t exclude moments of great dramatic intensity as well, pointing to Brahms even. The second movement has a marvelous elegance, and some passages brought to mind the ballet music of some Haendel operas. The ensuing Andantino opens with a beautiful and plangent oboe melody, soon joined by French horn, displaying Volkmann’s superb sense of color. The Andantino runs into a finale in jaunty dotted rhythms that bring back Schubert’s 9th to mind, and whose final pages even attain an exhilarating Brahmsian sweep.

The Cello Concerto is also a great piece. It provides a “missing link” between Schumann’s (1850) and Dvorak’s (1895). It is more advanced than Schumann’s, including in its very original, one-movement formal layout which makes it a “Rhapsody” more than a Concerto in the traditional sense. It boasts a near continuous melodic line for the cello, often written in the sol clef (the cello’s upper baritonal and most lyrical register) and apparently in highly virtuosic manner, including a number of gorgeous cadenzas. The Concerto should be in the repertoire of every serious cellist and would make a perfect discmate to Schumann’s. As mentioned above, I have another version of it, by Thomas Blees and the Hamburg Symphony under Alois Springer, an old Vox / Turnabout recording reissued to CD by Carlton Classics in 1996. There are significant interpretive differences between both versions – Blees more laid-back and spacious, Johannes Wohlmacher here more urgent – but they are not really what counts, both approaches are valid musically. What tips the scales in favor of the Vox version is its better sound, a bit crude maybe but affording more clarity than the more opaque and generalized digital sonics of cpo, more emotional presence to the cello, and Alois Springer whips his Hamburgers to greater bite and punch in the tutti than does Albert with his Norwestdeutsche Philharmonie.

To me Brahms was the towering Austro-German symphonist of the 19th Century (at least, until the time of Mahler), and IMO nobody approaches him, although Bruckner’s idiosyncratic style does set him apart. But I find Volkmann’s symphonies (and concerto) not inferior to Schumann’s and Mendelssohn’s, although they may not have the melodic distinctiveness of the latter. Maybe if I listened to Schumann’s and Mendelssohn’s symphonies immediately after Volkmann’s their superiority would sound obvious, but when I am listening to Volkmann I hear nothing to explain their popularity and his neglect.

The full scores of both Symphonies and Richard III-Overture and piano score of the Cello Concerto are available on the International Music Score Library Project (see link above) – the score of Symphony No. 2 was uploaded only a few days after I had originally posted this review on Amzon.com. Gratitude to whoever uploaded them (for Symphony No. 2, the Sibley Music Library at the Eastman School of Music). We are living great times (sometimes)! In the Symphonies, Werner Andreas Albert and his orchestra play all the notes, at tempos close to the scores’ metronome marks (overall slightly slower in the slow movement of Symphony No. 1, which might have benefited from a marginally more flowing pace), and they are not wanting in power. Now I’d love to hear alternative versions of the Symphonies, that would take them a little more in the Toscanini manner: more bite, forward movement, not so much relaxing of tempo in the more lyrical sections to keep the tension high. But I doubt that this will ever happen, and this set is more than serviceable.

The Everest may be a mighty summit, but the Mont-Blanc offers beautiful vistas and fine rewards as well. And the earth may even be more comfy than VY Canis Majoris, in terms of global warming…