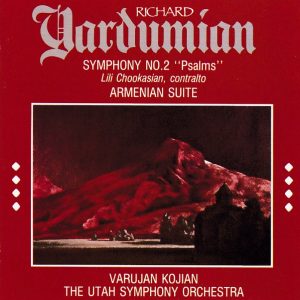 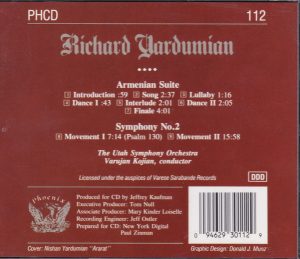 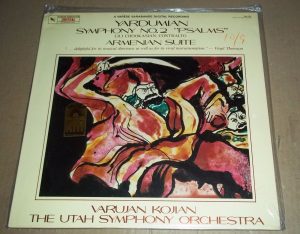 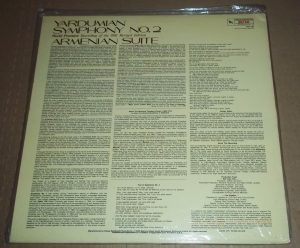 From folksy to grandiloquent
Originally posted on Amazon.com, 2 April 2010

Despite an often cavalier attitude about indicated precisely their sources, I’m rather fond of the Phoenix catalog. They started out with some valuable reissues from obscure LP catalogs, especially Desto. Among their very first instalments the most enjoyable have been Malcolm Arnold’s Symphony No.3/Four Scottish Dances, John Browning Playing Samuel Barber’s Sonata for Piano and Richard Cumming’s 24 Preludes, Ginastera’s Milena (paired with Mennin’s 4th Symphony) and his Sonata for Piano and Concerto for Piano, Karel Husa’s String Quartets No.2 and No.3, Britten’s Diversions by no less than Leon Fleisher with Sergiu Commissiona (paired with Ezra Laderman’s Concerto for orchestra, a great disc). Another major discovery afforded to me by their catalog has been Henry Brant’s extraordinary and outlandish Kingdom Come/Machinations.

So I bought this Yardumian CD (the reissue of an original Varèse/Sarabande LP – that’s where I found the indication about recording date and Symphony’s revised edition, not indicated by the Phoenix reissue) more for the label than the composer. And indeed, I’m afraid I can’t muster much enthusiasm for it. The Armenian Suite is an early work, written in 1937 when the composer was 19 (the seventh and final movement was added in 1954 at the behest of Eugene Ormandy, who was by then championing the composer) and is everything the title seems to imply: folksy. It develops folk themes sung by Yardumian’s parents, who immigrated from Armenia in 1906 to escape religious persecution.

The second Symphony (with alto voice) was written over a time span of 17 years, the first movement in 1947 and conceived as a self-contained Psalm and the second movement added in 1964, again at the behest of Ormandy, who recorded and championed the symphony. What Kojian and his Utah forces perform is the 1981 revised edition. Well, it sounds like Ernest Bloch’s music at its least-inspired, grandiloquence and all. Add to that that Lili Chookasian (for whom the second movement was written) doesn’t have a particularly ingratiating alto voice, and her delivery isn’t particularly comprehensible either – but laudably the text is included. In fact the liner notes are excellent.

That Ormandy championed Yardumian and took him as composer-in-residence at Philadelphia for nearly fifteen years (ca. 1950-64) speaks long about – what, I wonder: Ormandy’s lack of discrimination and taste when it came to modern music? But he performed music that was much better and original than that, including  Penderecki’s Utrenja! (to say nothing of Bartok, Prokofiev, Shostakovich and Hindemith – and add Ives, Schuman, Persichetti, Piston, Harris, Ginastera). Or was it his belief that his audience would appreciate only the most inoffensive “modern” music? That none of his numerous recordings of Yardumian’s music (including the compositions featured here) have been reissued on CD testifies, I guess, to the judgment of music History.

There’s been since a new recording of these same two works, on BIS, CD-1232, barcode 7318590012321, with the bonus of  Yardumian’s Violin Concerto (by the Singapore Symphony Orchestra under Lan Shui) – but I’m in no great hurry to buy it. You might find more to enjoy in this disc than me if you warm for the neo-romantic style of Howard Hanson or Virgil Thomson.