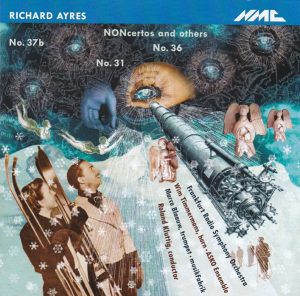 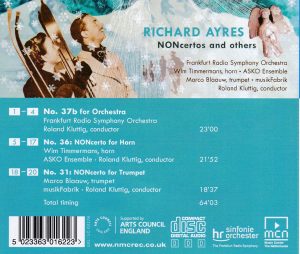 Very original. Richard Ayres was born in Cornwall in 1965. In 1986 he followed Morton Feldman’s classes in Darmstadt and Dartington and that decided him to embrace music as a full-time occupation. He completed his studies in composition, electronic music and composition at Huddersfield Polytechnic three years later, and went on to study with Andriessen (the liner notes don’t say WHICH Andriessen, but one supposes it was Louis, the most famous among the Andriessen family of composers) in Holland, where he is settled since 2006.

The CD features three works, two among Ayres series of what he calls NONcertos (No. 36 for Horn, No. 31 for Trumpet) and a piece for orchestra not specifically called NONcerto for orchestra, but it’s the spirit, No. 37b. The music is very original not just because of the pun used in the title, supposed to indicate that Ayres plays with the form of the Concerto pitting a soloist against a larger ensemble. Each NONcerto, says Ayres quoted in the liner notes, is “somehow about failure, about prolonging the time before the inevitable – we all eventually fail, it’s the universal common denominator”.

No, the music is very original because of its absolute freedom and the glee that pervades it. If, from the decisive influence of Feldman on Ayres’ decision to become a composer and his studies with Andriessen, you expect the music to be influenced by American minimalism, not at all. Re the liner notes again (very thorough and informative, as always with NMC, one of the best labels – and possibly THE best – for British contemporary music), “in the mid-1990s Ayres began what he described as a ‘gradual opening-up’ of his musical language. As he said at the time, ‘I want to use consonance, dissonance, melody, texture, elephants, clouds, snowballls, anything, from any time and whenever it is needed – bound only by the borders of my limited imagination”.

And you can hear it all in these three works, with only the disclaimer that Ayres has great imagination. The music is rowdy, evoking at times Ivesian cacophonies, demented circus music, it is often dissonant and aggressive but always with a sense of glee and never Varesian grimness, sometimes consonant and beautiful, “modern” certainly but not in the uncompromising and forbidding manner of the serialists, modern in its willingness to embrace all and any kinds of musical languages, with no taboos. It is, in its very rowdiness, immensely fun, you can sense in Ayres the spirit of the kid banging on cans.

Put Richard Ayres on your musical map, and start pestering NMC for them to record the complete series of NONcertos. According to his catalog of works on his publisher’s website, Schott (this link will open a .pdf document in a new tab), there are three more, No. 24 for alto trombone (already recorded in 2002 on an Ayres CD from the Dutch label Donemus Composer’s Voice, CV 138 – NMC has in fact borrowed from that CD their recording of No. 31 NONcerto for trumpet), No. 30 for orchestra, cello and high soprano, No. 40 for oboe. Other works for orchestra or ensemble include No. 43 “(Glorious)”, No. 44 Diary Pieces, No. 46 Twenty-three thoughts about Robert Walser. No. 42, In the Alps, is subtitled “an animated concert” and is classified among his “Works for Solo Voice with Orchestra or Instruments” – the composer himself calls it “a melodrama”, and it’s been recorded, by the extraordinary Barbara Hannigan and the Nederlands Blazers Ensemble, on NBE live NBECD26, barcode 9789070778194. His latest work is No. 45, Peter Pan, an opera. Peter Pan ? Somehow, I’m not surprised that Ayres chose the story of a kid who never grew up.

For more reviews of his music, go to my Ayres introductory page.