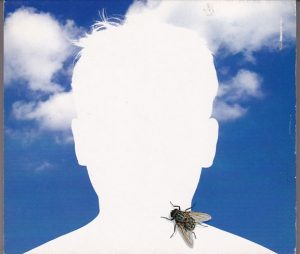 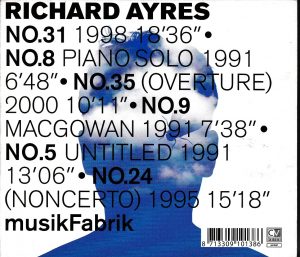 When you think of “talented young prominent British composer”, if you are a little familiar with the contemporary music scene, you’ll probably think of Thomas Adès (born 1971).

Add Richard Ayres. Born in 1965 in Cornwall and established in the Netherlands, he bridges the gap between Adès and another “wonderkid” of British contemporary music: George Benjamin (b. 1960). I recently discovered him and his music, through another and more accessible CD, Noncertos & Others on NMC D162.

But if I had to define the music and compositional style of those three composers in one adjective, I’d call Benjamin’s “sophisticated”, Adès’ “polished” – and Ayres “unruly”, and even “gleefully unruly”. If Benjamin is the whizz kid and Adès the good boy, Ayres is the mischievous one.

No. 31 for Trumpet and Ensemble from 1998 (in fact, although for some reason the CD fails to mention it, one in the series of NONcertos written by Ayres, meant to play with the concerto form and turn it upside down by depicting “failure” and “prolonging time before the inevitable – inevitable – we all eventually fail, it’s the universal common denominator”) starts with the soloist singing or even groaning in the trombone like some distorted Tibetan monk over harp tremolos, a crash of consonant music that could be a shard from Philip Glass, the moaning voice of a woman, a reference (if my ears don’t deceive me) to Piaf’s song La vie en rose, and it continues with jubilant Ivesian cacophonies, trombone burps, clarinet guffaws, obsessive Varesian repetitions, “Jaws”-like harp ostinatos, whispers, but also moments of agonizing lyricism. The finale sounds like demented ballroom music in a film by Emir Kusturica. But the second movement is a long Elegy to the memory of Alfred Schnittke, which could be music written for the moment of autumnal longing in a romantic film.

What makes the music of Ayres so original, so unique and so fun is that it accepts to be restricted and constricted by no rule. Let me quote extensively the liner notes, because they give much of the relevant information and express much that I feel about Ayres’ music: They start with a quote from Ayres himself:

“It feels as if I have shed a number of heavy chains – chains I had put on myself or that had been hung upon me by my environment as cultural baggage. One day alls sorts of supposedly sacred truths seemed to me quite ridiculous: `Thou shalt be original, thou shalt never repeat thyself, thou shalt write no consonances, thou shalt, thou shalt… ‘ I am now able to employ consonances, dissonances, melodies, textures, elephants, clouds, snowballs or whatever, where and when I want. The only limits on me are the boundaries of my own imagination.”

And the notes go on: “Richard Ayres (…) regards himself as one who attends to neglected peculiarities of sound: `I rearrange things that have often been around for a long time. I feel attracted to sounds and musical gestures that many actually banish from their music. It’s the awkward, scorned, lost things that concern me’. Whether they be the sounds produced by a brass player trying out various mutes, the hammering tones of a piano tuner or the blubbeing of someone bursting into tears, Ayres does not turn a hair at bending the ear to such acoustic sensations. He places the familiar sounds in an alienating context, right away confronting the listener with a dilemma: is it music or theatre?

Ayres has no reason to worry about the originality of his compositions. After all, originality lies in the way he considers and presents things. In his hands, a chain of dominant seventh chords, the open strings of a violin or an imaginary Tyrolean folk tune sound like uprooted curiosites to be cherished as precious objects. The listener is made to share in Ayres astonishment (and frequently his emotions) regarding the apparently mundane”.

No. 8 for Piano Solo from 1991 (Ayres works are titled after their opus numbers, and he’s now… in his mid-forties) sounds like an enigmatic and delicate clockwork mechanism. No. 35 (which Ayres calls “Overture for an imaginary opera”) for Euphonium, Two Pianos and Timpani (2000) sounds like the jamsession played by Katzenjammer kids on cocaïne. No. 9 (subtitled “MacGowan”, after the leader of The Pogues, an Irish folk-punk band who had just left the band due to illness, and conceived as a lamentation) for Celtic Harp, Bagpipes and Violin from 1991 sounds like Scottish/Irish folk musicians on cocaïne; if you are famililar with the sound of the Bagpipe, you know that it can be quite ear-piercing (I personally love it), but this gives the impression of a mixture of that and of a giant mosquitoe. I’d love to hear that at a Festival of Celtic music, it would cause a riot, but second best would be for it to be performed on the occasion of the opening of the new Dutch Parliament building in the presence of Queen Beatrix – and it was. No wonder Ayres was never made a Dutch Lord.

No. 5 for Trumpet and Piano (1991): violently pounding piano playing machine-like ostinati ala George Antheil against snarling trumpet, then hushed piano playing clockwork droplets of music in the upper registers against violent trumpet shouts.

No. 24, NONcerto for trombone (1995), is filled with events – consonant, dissonant, members of the ensemble singing on repetitive tonal harmonies recalling Philip Glass, sardonic marches that could come from Maurizio Kagel, noises of the trumpetits rummaging in a box to find the desired mute, mechanical ostinati evoking George Antheil and Ligeti, and more cacophonies.

Conductor Roland Kluttig seems to be the great champion of the music of Ayres – he’s also the one conducting on that NMC CD referred to above (which in fact borrows its recording of the NONcerto for trumpet from here). TT 71:44.

According to his online catalog at his publisher Schott (this link will open a .pdf document in a new tab), there are two more NONcertos of Ayres to be recorded: No. 30 for orchestra, cello and high soprano and No. 40 for oboe. Other works for orchestra or ensemble include No. 43 “(Glorious)”, No. 44 Diary Pieces, No. 46 Twenty-three thoughts about Robert Walser.

No. 42, In the Alps, has been recorded, with the extraordinary Barbara Hannigan and the Nederlands Blazers Ensemble, on NBE live NBECD26, barcode 9789070778194, and it has to be my next Ayres buy. It is subtitled “an animated concert” and is classified among Ayres’ “Works for Solo Voice with Orchestra or Instruments” – the composer himself calls it “a melodrama”. His latest work is No. 45, Peter Pan, an opera: the story of a kid who never grew up.

Put Richard Ayres on your map (and for more reviews of his music, go to my Ayres introductory page)