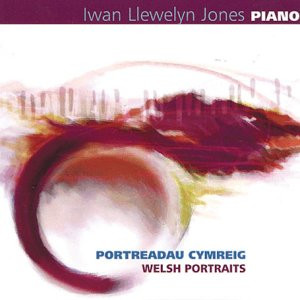 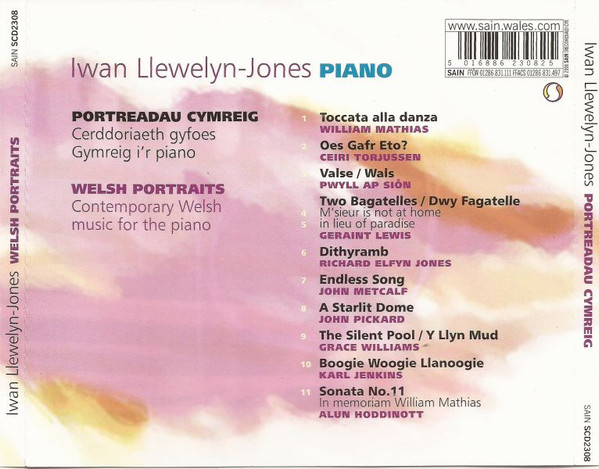 Recorded 14-16 August 2001 at the Concert Hall of the Nimbus Foundation, Monmouth

Voices of the Wales
Originally posted on Amazon.com, 8 December 2013

If so, there’s a great concentration of them on this CD. The two most noted are William Mathias (1934-1992) and Alun Hoddinott (1929-2008 – he was still alive when the recording was made, in August 2001) – but I had also already run accross the name and music of John Pickard – in fact, it is hearing the latter’s “A Starlit Dome”, played by Raymond Clarke on a great Mathias-Pickard CD published by the label Athene in 1998 that sent me to this CD, where Iwan Llewelyn-Jones also plays it. For a while I thought I knew also and had reviewed the music of John Metcalf (born in 1946), but it turns out that, no: I’ve heard and reviewed the music of New Zealand-born John MetcalfE, born in 1964, “The Inner Line”, on Black Box BBM 1053.

In fact Metcalf’s “Endless Melody” (track 7) does sound like the music John Metcalfe could have composed, from the memory that I had of that other CD: a simple and wistful ballad, sentimental and harmonically trite, film music for some sentimental romance. In his notes Metcalf brags that “despite its apparent simplicity there are no exact repeats in the work”; maybe, but it doesn’t make it less sentimental and trite. Based on that piece Metcalf isn’t one of those Welsh composers whose music I’d want to explore further.

Not everything is a masterpiece, to be sure, but almost all of it is engaging or entertaining – and the CD does contain a few masterpieces. Karl Jenkins‘ Boogie Woogie Llanoogie (track 10) is, indeed, a wild, demented boogie, impressively virtuosic – it would make quite an impression on your friends if you were able to play it at the parties, or maybe they’d kick you out. Mathias‘ short Toccata alla danza (track 2) is boisterous, vigorous and rhythmic, making him sound like some kind of Welsh Bartok. Richard Elfyn Jones‘ short Dithyramb is also a very energetic and pounding piece, with faint echoes of jazz. There are nice, atmospheric moments in Geraint Lewis‘ Two Bagatelles (tracks 4 & 5), playing on resonance and arpeggiated chords in the upper registers and Debussy-like harmonic progressions, alongside more simplisitically ballad-like passages and simple chorales.

Grace Williams (1906-1977) had hitherto escaped my attention, but her short Prelude, “The Silent Pool” (track 9) is a haunting little piece in dreamy and mysterious harmonies, and it does make me want to explore more of this composer.

It’s interesting that many of those compositions should use similar processes, atmosphere created through tremolos, arpeggios, depressed sustained pedal. Ceiri Torjussen‘s “Oes Gafr Eto ?” fits that description and is an impressive composition, based on a Welsh folks song (“Counting the Goats”), with flights in a more scherzando and sardonic mood when the folk song is evoked. I had never heard of Torjussen (that’s a he), the youngest composer represented on the disc (born in 1979), but checking on his Wikipedia entry I see that he’s become a very successful film-music composer in the US and now resides in LA. Same kind of processes with Pwyll ap Siôn‘s Valse, but here the mood and harmonies are more sentimental. A search online shows that Siôn (also a he) is a composer and musicologist, faculty member at Bangor University’s School of Music, and a specialist of Michael Nyman and minimalism. It shows in his music.

One of the best and most impressive pieces in that “style” is John Pickard’s “A Starlit Dome”(track 8) which attracted me to this disc in the first place. An “astronomical nocturne” in the composer’s own words, it was inspired by the observation of the Great Nebula in Orion. It starts in slow-moving, meditative chords in the low register (Messiaen’s voice of God in Vingt Regards sur l’Enfant Jesus comes to mind) and gradually rises, by way of dreamy melodies and chordal progressions all bathed in resonance, to great power through pounding chords and cascading arpeggios.

The CD is also important for being, so far as I know, the only recording of Alun Hoddinott‘s 11th Piano Sonata – an even greater masterpiece. Nimbus famously had Martin Jones record Hoddinott’s complete output in the genre up until the date of recording (1992), and that included Piano Sonatas 1-10 (Nimbus NI 3569 barcode 083603536923 and NI 3570, barcode 083603537029). But Hoddinott lived to complete two more, the 11th in 1993, written to the memory of the recently deceased Mathias. It’s a great work. Like Mathias or Tippett, Hoddinott had the ability to conjure an entirely personal and engrossing sound-world using tradtional compositional means. The Sonata is hugely atmospheric, with the same kind of processes found in Pickard’s “A Starlit Dome”, starting with ominous chordal progressions in the lower registers, resonating chords, dreamy arpeggiated chords, depressed sustained pedal, and seguing at 4:25 into an impressive and equally atmospheric Toccata with machine-gunning repeated notes and pounding chords.

Llewelyn-Jones has a special legitimacy in some of these pieces, as they were composed for him and he premiered them: Elfyn Jones’ Dithyramb, Pickard’s Starlit Dome and Hoddinott’s Sonata. In “A Starlit Dome”, he’s more meditative, implacable and massive than Raymond Clarke on Athene, Clarke is more animated, and ultimately Clarke’s better recording and more focused piano brings more power to the music. That said, the differences are in the smallest details and Llewelyn-Jones offers a fine version as well. This is a very entertaining disc, and the inclusion of Hoddinott’s Sonata makes it an indispensable one.